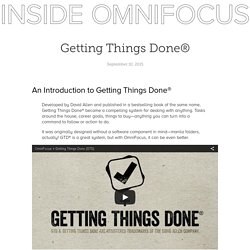 Tasks around the house, career goals, things to buy—anything you can turn into a command to follow or action to do. It was originally designed without a software component in mind—manila folders, actually! GTD® is a great system, but with OmniFocus, it can be even better. Capture Getting Things Done® starts with the concept of an Inbox—a temporary holding area to get any idea or task out of your mind so you don’t forget it. David Allen advises GTDers to do a brain dump: spend 20 to 30 minutes going through all aspects of your life, putting down anything that you need to work out in the future. Process Processing your Inbox is important—take time to do it right. What is it? Take “Build a sailboat next year” as an example. Read more about delegation—there are many different approaches. 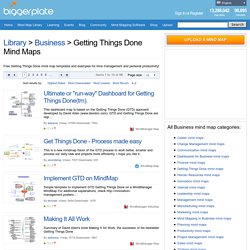 This dashboard map is based on the Getting Things Done (GTD) approach developed by David Allen (www.davidco.com). GTD and Getting Things Done are regi… By tpassist. Views: 41590 Downloads: 7062 MindManager Map This is a new mindmap flavor of the GTD process to work better, smarter and process our daily task and projects more efficiently. iMindMap Map Simple template to implement GTD Getting Things Done on a MindManager MindMap For additional explanations, check By ericlodi.

MindManager XMLMap Summary of David Allen's book Making It All Work, the successor of his bestseller Getting Things Done By estrenuo. THis is a map of the key elements of the natural planning model as outlined in David Allen's GTD book By nialljd. A mind map outlining the time and action management approach, as created by David Allen. XMind Map The radial nature of Chronodex also encourages radial thinking. 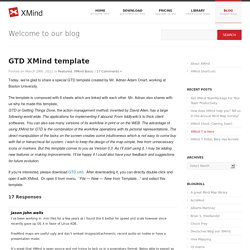 Adnan Adam Onart, working at Boston University. The template is composed with 6 sheets which are linked with each other. Mr. Adnan also shares with us why he made this template,GTD or Getting Things Done, the action management method, invented by David Allen, has a large following world wide. If you’re interested, please download GTD.xmt.

DropTask - Visual Task Management - A simple and fluid way to get things done. GTD in 15 minutes – A Pragmatic Guide to Getting Things Done. GTD—or “Getting things done”—is a framework for organizing and tracking your tasks and projects. 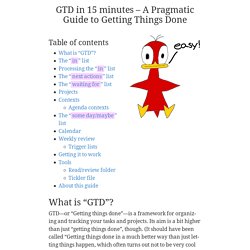 Its aim is a bit higher than just “getting things done”, though. (It should have been called “Getting things done in a much better way than just letting things happen, which often turns out not to be very cool at all”.) Its aim is to make you have 100% trust in a system for collecting tasks, ideas, and projects—both vague things like “invent greatest thing ever” and concrete things like “call Ada 25 August to discuss cheesecake recipe”.

Everything! Sound like all other run-of-the-mill to-do list systems, you say? One of the basic assumptions of GTD is that you are dumb—or, rather, that your subconsciousness is quite dumb when it comes to thinking about things you should have done. Jessica Kerr put it perfectly: Pretend your brain is a white board. A great part of the “magic” is to convert both tasks and whims into physical and visible actions as you soon will see. Awesome! Agenda contexts. The 3-Strike System: How To Prioritize Your To-Do List. Advertisement Are you not getting through your to-do list? 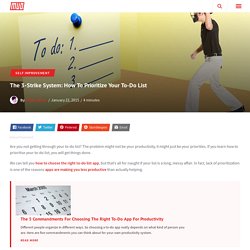 The problem might not be your productivity, it might just be your priorities. If you learn how to prioritise your to-do list, you will get things done. We can tell you how to choose the right to-do list app, but that’s all for naught if your list is a long, messy affair. In fact, lack of prioritization is one of the reasons apps are making you less productive than actually helping. Keep Changing Constantly: The 3-Strike System Here’s the secret to task list prioritization that no one talks about: You have to keep changing it up. I’ve dabbled with almost every task prioritization system there is, from separating lists by location to ranking tasks by emotion. I now have a three-strike system. Surprisingly, this is the one system that works for me. 26 Reasons Not to Use GTD. Say it softly. 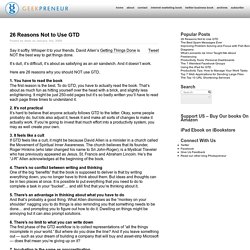 Whisper it to your friends. David Allen’s Getting Things Done is NOT the best way to get things done. It’s dull, it’s difficult, it’s about as satisfying as an air sandwich. And it doesn’t work. Here are 26 reasons why you should NOT use GTD. 1.