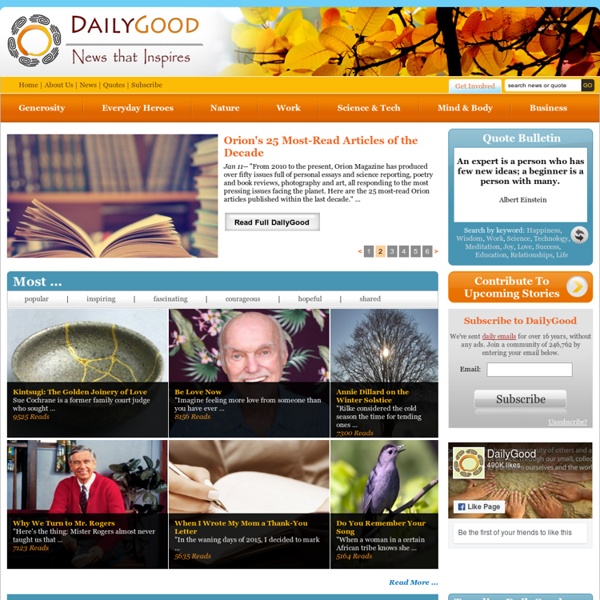 Hamlet's Blackberry: To Surf Or Not To Surf? Apr 20-- "Do you find yourself checking Facebook as soon as you wake up in the morning? Do you answer e-mails on your Blackberry while surfing the Web? Even as you read this article, is your right index finger twitching on the mouse, just itching to click on something new? If so, welcome to the 21st century. Without even realizing it, we've ...

Activist Media One of the difficulties faced by social movements is getting their message reported clearly, accurately and effectively through the lens of mainstream media. A key factor in this work has been the creation of alternative media that both offer a direct channel to fairer representation and can keep the mainstream media honest by critiquing their coverage. In the contemporary, media-saturated world new problems emerge in the form of "protest fatigue" -- mainstream failure to cover demonstrations often dismissed as "sixties style protests," as if protest can be confined to one decade or is a stylistic choice -- and the silo effect in which people only get the news that reinforces their ideology. The sites and resources below are working to address these issues with courage and imagination. Featured Site

How to Be a Positive Person, in Under 300 Words ‘Henceforth I ask not good-fortune, I myself am good-fortune.’ ~Walt Whitman By Leo Babauta I’m a pretty positive person — I consider it one of the keys to the modest success I’ve had in creating new habits and achieving things in the last few years. I couldn’t have run three marathons without a positive mindset, nor created Zen Habits, mnmlist, or The Power of Less. I couldn’t have lost 50 lbs., quit smoking, eliminated my debt, or quit my day job. Handmade by Michelle: Dear Santa - Christmas at ABNH week 3 Phew! Christmas is really creeping up - only 5 weeks to go! Week 3 of A Blog Named Hero's Christmas event is all about decor. Woman Rejecting Femininity and How You Can Stand Out If we as women, are truly feminine at our core but reject it, we can sometimes find ourselves in dating situations where the man doesn’t commit, even after the relationship got sexual. Especially after the relationship got sexual. Wanting a woman for sex is one thing, but wanting a woman for a relationship, that tends to happen when a man perceives high value in a woman. I have a couple of ideas on how our feminine energy can help us distinguish whether we are showing up in the dating market as a ‘one of many’, or a man’s ‘one and only’. If you are truly a feminine woman at your core, but don’t know how to let your femininity surface, then you might be wasting a lot of your energy just pushing down your natural drivers, for the sake of being enough or gaining society’s acceptance, perhaps.

We Speak For Earth The City of Dallas gave $1.1 million to Ronald Jones on Wednesday for his claims that he was beaten and falsely arrested by Dallas police — and then spent 15 months in jail as a result.On December 18, 2009, Dallas police got a call of two white men fighting in downtown Dallas.But then Dallas police Officer Matthew Antkowiak saw Jones — who is African-American — crossing Reunion Boulevard."Mr. Jones is walking down the street. Doesn’t fit the description at all," said his attorney, Don Tittle.The officer claimed Jones was throwing beer cans, so he pulled him over to arrest him."From there, he pulls one of Mr. 9 Mind-Bending Epiphanies That Turned My World Upside-Down Over the years I’ve learned dozens of little tricks and insights for making life more fulfilling. They’ve added up to a significant improvement in the ease and quality of my day-to-day life. But the major breakthroughs have come from a handful of insights that completely rocked my world and redefined reality forever. The world now seems to be a completely different one than the one I lived in about ten years ago, when I started looking into the mechanics of quality of life. It wasn’t the world (and its people) that changed really, it was how I thought of it. Maybe you’ve had some of the same insights.

How a Promise Ring Works – A Symbol of a Promise What’s all this fuss about promise rings? Are they something new or have they been around for a while? What do they mean and why is my teenager wearing one? If you’ve ever wondered what the rage is all about, then you’ve come to the right place! What exactly is a promise ring? 3×5 Challenging Authority Since 1978 I am a writer, traveler, and entrepreneur with the goal of visiting every country in the world while connecting with other world-changers. Continue reading about Chris Mission Accomplished!

100 Websites You Should Know and Use In the spring of 2007, Julius Wiedemann, editor in charge at Taschen GmbH, gave a legendary TED University talk: an ultra-fast-moving ride through the “100 websites you should know and use.” Six years later, it remains one of the most viewed TED blog posts ever. Time for an update? We think so. No, you're not entitled to your opinion Every year, I try to do at least two things with my students at least once. First, I make a point of addressing them as “philosophers” – a bit cheesy, but hopefully it encourages active learning. Secondly, I say something like this: “I’m sure you’ve heard the expression ‘everyone is entitled to their opinion.’ Perhaps you’ve even said it yourself, maybe to head off an argument or bring one to a close. Well, as soon as you walk into this room, it’s no longer true.

The Peoples Voice Greg Hunter· Economist Dr. Paul Craig Roberts says, "The physical stock of gold in the West to meet delivery demand is diminishing rapidly. So, one day the Chinese will buy 100 tons of gold, and we won't be able to make delivery. That would crash the system. It would just pop. A Beautiful Mess I love using cloth napkins to dress up our dinner table, and through the years I've grown even more fond of their sustainability and cost effectiveness. Though, I'm not sure how cost effective it is if you keep buying more and more cloth napkins each year! This holiday season I thought it would be fun to look at how I could dress up the napkins I already own to give them an extra festive vibe. Check out three simple ways you can give new life to your table linens.