New business ideas from around the world 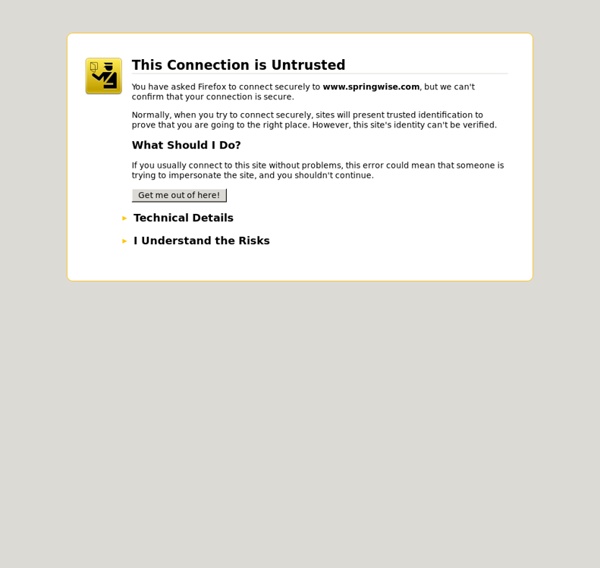 10 Web trends to watch in 2010 Mashable's Pete Cashmore says real-time communication, Internet TV and social gaming will be big in 2010. Mashable's Pete Cashmore lists his 10 Web trends that we'll be talking about next year Sparked by Twitter, Facebook and FriendFeed, the real-time communications trend will grow The cloud-computing movement will see a major leap forward in the first half of 2010 2010 will be the breakthrough year of the much-anticipated mobile payments market Editor's note: Pete Cashmore is founder and CEO of Mashable, a popular blog about social media. He is writing a weekly column about social networking and tech for CNN.com.

Customer Development Checklist for My Web Startup – Part 2 10 Flares05401--×10 Flares x Access to videos, talks, and worksheetsInvitation to private Google Plus CommunityJoin in on live Q&A webinars and fireside chats 21 Websites That Will Make Your Twitter Explode We all want to be followed, well maybe not all of us but anyway.. The thing with Twitter is the more followers you have the faster your words get spread over the vast population of 90 million tweople (twitter people). And if we want to get renown for what we do or have to say, if we want to sell or market ourselves we all need to find different ways of getting more followers. One of the easiest ways to do that is to register your twitter profile with the directories and websites that will let other tweople find you. The good thing is you can do that for free. That way other people with common interests will be able to find you and follow you.

Top 10 Holiday Gadgets Buying Guide The wives and girlfriends of my friends have been asking me for recommendations so I decided to share the analysis for all gadget lovers of the world to be happy this holiday season Video Game: Call of Duty: Black Ops There are lots of great games out in the market right now: Red Dead Redemption, Assassin’s Creed: Brotherhood, Vanquish and Civilization V in particular come to mind for single player fun. However in terms of pure unadulterated multiplayer fun nothing trumps Call of Duty: Black Ops.

The Four Key Components of a Great Web Design There’s a lot that goes into creating a web design, but I believe it can be broken down into four main components. If you’re able to execute on all four, you will have a hit web design on your hands. However, if you come up short on one, the entire design will suffer. 80legs sets its web crawler free When 80legs launched its web crawling service at DEMO (a conference co-produced by VentureBeat) last fall, chief executive Shion Deysarkar told me he wanted to place tools previously exclusive to web giants within the reach of smaller companies, so that someone could, for example, build their own “mini-Google.” Now he’s taking that philosophy a step further, by offering 80legs services for free. Why the change? In an email announcing the free service, 80legs says it discovered that many users were crawling less than 100,000 pages. Since the Houston company was charging $2 per 1 million pages crawled, plus $0.03 for every CPU hour used, it wasn’t going to make much money from those users.

Don’t write a business plan “You need a business plan” is the mantra of MBA types. As they say, businesses don’t plan to fail, they fail to plan! Who could argue with such a clever turn of phrase? Let’s do some quotes: 5 Superb Social Media Tools for Musicians Zach supervises social media strategy at Martin|Williams Advertising in Minneapolis, MN and runs 808 Management, a consultancy for independent artists. Follow him on Twitter at @zackolantern. As we roll in to 2010, the selection of band-friendly social media tools is growing. Say goodbye to sporadic MySpace updates and incomplete tour information on Facebook.

The Essential Startup Reader: 10 Lessons in Entrepreneurship – G As a blogger, I spend most of my time writing. But it’s time spent reading that’s most satisfying. Here’s a short (and by no means a complete) list of 10 articles that encapsulate the art of the startup. Most were published during 2009, and I found them educational and full of practical tips that we’ve applied to our business. They’ve also helped me think differently about startups and entrepreneurship. $0 to $20 Million: Ten Hand-to-Hand Sales Tactics This guest post is written by Matt Bell, VP of Sales and Business Development for Azaleos. Azaleos is a company focused on putting the things in the cloud that make the most sense for large enterprise; application management. Matt offers appealing insight because he has grown sales for companies during both of the last two economic meltdowns.

10 Ways to Share Music on Twitter Twitter is fast becoming one of the most important ways to share information quickly, easily, and instantly over the web. Users and developers have found a lot of innovative ways to pack a ton of utility into just 140 characters, including sharing images, sharing video, and sharing documents. What about music? Turns out, there are plenty of ways to share tunes on Twitter as well.

I love this website! It is so great to see the new and exciting companies that people are building around the world. Entrepreneurship at its finest. by rejacob Nov 1