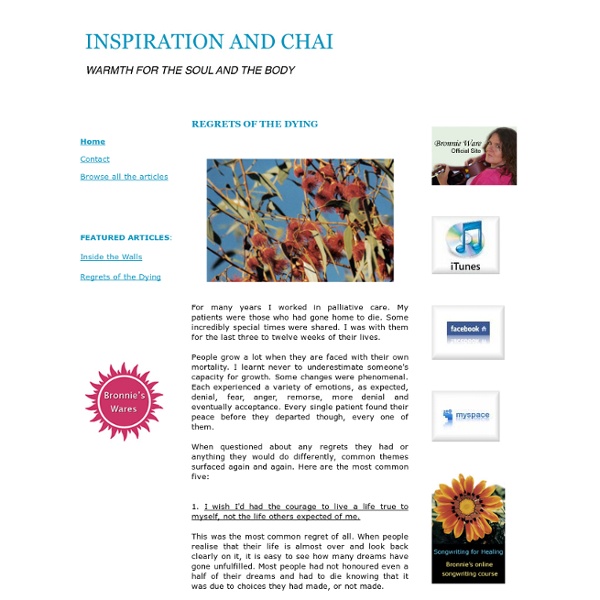 For many years I worked in palliative care. My patients were those who had gone home to die. Some incredibly special times were shared. I was with them for the last three to twelve weeks of their lives. People grow a lot when they are faced with their own mortality. I learnt never to underestimate someone's capacity for growth. When questioned about any regrets they had or anything they would do differently, common themes surfaced again and again. 1. This was the most common regret of all. It is very important to try and honour at least some of your dreams along the way. 2. This came from every male patient that I nursed. By simplifying your lifestyle and making conscious choices along the way, it is possible to not need the income that you think you do. 3. Many people suppressed their feelings in order to keep peace with others. We cannot control the reactions of others. 4. It is common for anyone in a busy lifestyle to let friendships slip. 5. This is a surprisingly common one.

The Top of My Todo List April 2012 A palliative care nurse called Bronnie Ware made a list of the biggest regrets of the dying. Her list seems plausible. I could see myself—can see myself—making at least 4 of these 5 mistakes. If you had to compress them into a single piece of advice, it might be: don't be a cog. The 5 regrets paint a portrait of post-industrial man, who shrinks himself into a shape that fits his circumstances, then turns dutifully till he stops. 29 Semi-Productive Things I Do Online When I’m Trying to Avoid Real Work You don’t always have to work hard to be productive. Productivity can simply be the side effect of doing the right things. So here’s a list of 29 semi-productive things I do online when my mind is set on avoiding ‘real work.’ Check delicious popular tags like ‘useful,’ ‘tutorials,’ ‘tips,’ ‘howto,’ ‘advice,’ ‘entrepreneurship,’ etc. for interesting, educational articles to read.Watch one of the thousands of educational videos streaming at TED.com, Academic Earth and Teacher Tube.Read an online book list and find a new book to grab next time I’m at the library. Here’s another list. And another.

NORTHERN INSIGHT MEDITATION CENTER WAT RAM POENG The Northern Insight Meditation Center welcomes all who are willing to learn the Vipassana-Meditation Practice to develop the mind. May you be happy, free from suffering, diseases, grief, troubles, difficulties and danger and be protected from all misfortune. Mental Development is a personal experience. It does not matter if you are Buddhist, Christian, Jewish or Moslem. Nor is it important what nationality or color you are, as each person in the world is longing for a better life.

Undergraduation March 2005 (Parts of this essay began as replies to students who wrote to me with questions.) Recently I've had several emails from computer science undergrads asking what to do in college. I might not be the best source of advice, because I was a philosophy major in college. But I took so many CS classes that most CS majors thought I was one.

Free Online Kundalini Yoga Poses & Exercises Skip to content Skip to search - Accesskey = s AnmolMehta.Com - Mastery of Meditation, Yoga & Zen Do Your Thoughts & Your Beliefs Colour Your Perception of the World? Buddhist Meditation in Thailand text Buddhist Meditation in Thailand Any of us have at one time or another found the toll of living in the modern world hard to bear. 35 Inspiring Quotes from Albert Einstein « Always Well Within Albert Einstein (March 14, 1879 – April 18, 1955), the famous theoretical physicist, developed the theory of relativity and is considered the father of modern physics. The nuclear physicist Robert Oppenheimer shared his impressions of Einstein by saying, “He was almost wholly without sophistication and wholly without worldliness . . . There was always with him a wonderful purity at once childlike and profoundly stubborn.”

www.catb.org/~esr/fortunes/liberty Love your country, but never trust its government. -- Robert A. Heinlein. % "The power to tax involves the power to destroy;...the power to destroy may defeat and render useless the power to create...." -- Chief Justice John Marshall, 1819. % "Rightful liberty is unobstructed action, according to our will, within limits drawn around us by the equal rights of others." -- Thomas Jefferson % Sometimes it is said that man cannot be trusted with the government of himself. Can he, then, be trusted with the government of others? The 5 Minute Trick to Dramatically Improve Quality Time with Your Kids My wife and I both have demanding jobs – mine as a partner at a product development company and hers as a managing director at a transfer pricing consulting company. We also are proud parents of a three year old, with another one imminently arriving. The juggling act has been something neither of us have ever been fantastic at. For me, it’s proven difficult at times to shut work off and fully engage.

Four Powers of Maya EACH of the four Yugas, as described by the ancient Hindu sages, has a correspondence with one of the four powers of Maya, the darkness of Illusion that hides from man his Divine nature. Each Yuga brings to mankind in general an opportunity to control and understand one of these universal powers. The four Illusions, Abidyas, of Maya, counting from the grossest to the most subtle, are: This four-fold aspect of Maya is mentioned in the bible in the following passage (Rev. 4:6): "And in the midst of the throne and round about the throne, were four beasts full of eyes before and behind." In Kali Yuga, the knowledge and power of man is confined to the world of gross matter (Bhu Loka, first sphere,) and his state or natural caste is Sudra, a menial or dependent of Nature.