Getting Started with GTD Templates. It’s 4:45 p.m. on Wednesday afternoon, and you have one question on your mind: what should I be doing right now? 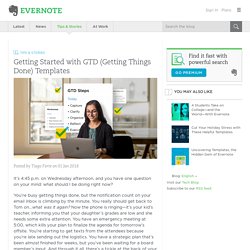 You’re busy getting things done, but the notification count on your email inbox is climbing by the minute. You really should get back to Tom on…what was it again? Now the phone is ringing—it’s your kid’s teacher, informing you that your daughter’s grades are low and she needs some extra attention. You have an emergency meeting at 5:00, which kills your plan to finalize the agenda for tomorrow’s offsite. You’re starting to get texts from the attendees because you’re late sending out the logistics. Welcome to the era of information abundance, which has created in many of us a scarcity of attention. David Allen’s best-selling book Getting Things Done* (known affectionately by fans as GTD) proposes a simple 5-step approach to managing the complexity of modern work.

Forget To-Do Lists. Focus on This Instead. Source: PicJumbo. 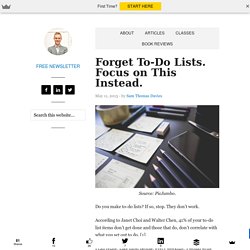 Do you make to-do lists? If so, stop. They don’t work. According to Janet Choi and Walter Chen, 41% of your to-do list items don’t get done and those that do, don’t correlate with what you set out to do. [1] I can relate. How does that happen? I would feel disappointed because I had not made headway with my goals and I would lose momentum. That is until I read James Altucher’s new book, The Choose Yourself Guide to Wealth, and was introduced to having themes instead. Let me explain. The Problem with To-Do Lists “Abundance only comes when you are moving along your themes – when you are truly enhancing the lives of the people around you”– James Altucher.

The problem with to-do lists is that they are very goal orientated and come with a number of disadvantages. For example… They can cause anxiety. The Not-To-Do List: 9 Habits to Stop Now. This is how the world felt before Crackberries. 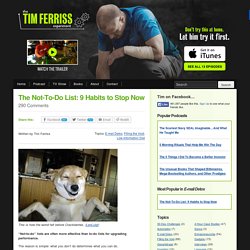 The Two Minute Warning: Why Two Minute Tasks Don't Work. To-Do List Apps. Do vs. Done Lists: Jot Down Your Small Wins to Amplify Success. If you’re reading the Evernote Blog, chances are you’re someone who loves to get things done. 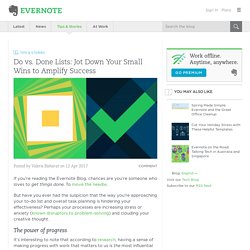 To move the needle. But have you ever had the suspicion that the way you’re approaching your to-do list and overall task planning is hindering your effectiveness? Perhaps your processes are increasing stress or anxiety (known disruptors to problem-solving) and clouding your creative thought. The power of progress It’s interesting to note that according to research, having a sense of making progress with work that matters to us is the most influential factor in maximizing long-term creative output, positive emotions, and motivation. A done list is a log of the tasks you’ve completed. Success leaves clues Renowned entrepreneur and venture capitalist Marc Andreessen, co-founder of Netscape, cheekily calls it the “Anti To-Do List.” All of these systems refer to the process of reflecting and writing down what you’ve done. When we reflect on progress, we practically metabolize it. Weekly Planning — the spark notebook. Happy Friday! 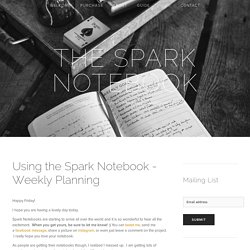 I hope you are having a lovely day today. Spark Notebooks are starting to arrive all over the world and it is so wonderful to hear all the excitement. When you get yours, be sure to let me know! :) You can tweet me, send me a facebook message, share a picture on instagram, or even just leave a comment on the project. I really hope you love your notebook. As people are getting their notebooks though, I realized I messed up. Why are there no instructions? So, I am working on a guide, and we will probably print it on paper and distribute it with future versions of the notebook. Today, I put together some quick notes on how to do a weekly planning session. Every week I start my week with a planning session. Zen To Done (ZTD): The Ultimate Simple Productivity System. By Leo Babauta “It’s about the habits and the doing, not the system or the tools.” 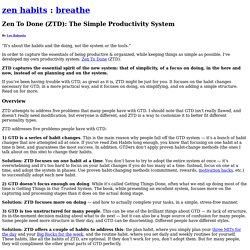 In order to capture the essentials of being productive & organized, while keeping things as simple as possible, I’ve developed my own productivity system: Zen To Done (ZTD). ZTD captures the essential spirit of the new system: that of simplicity, of a focus on doing, in the here and now, instead of on planning and on the system. If you’ve been having trouble with GTD, as great as it is, ZTD might be just for you. It focuses on the habit changes necessary for GTD, in a more practical way, and it focuses on doing, on simplifying, and on adding a simple structure. Overview. The Evolution of Contexts. Using Energy Levels as Contexts.