Powerbot. Guide. Getting Things Done Fast Workbook. How to Scan Documents Directly into Evernote. Thanks to Evernote, I have been able to go completely paperless in my new home office. 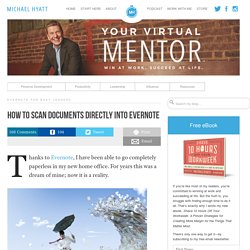 For years this was a dream of mine; now it is a reality. Photo courtesy of ©iStockphoto.com/sekulicn In this post, I want to explain how to use a scanner with Evernote. This has been the single biggest clutter-buster for me. No more stacks of paper sitting on my desk or credenza. Drive. Put Evernote to Work! How does TaskClone Work? How TaskClone WorksTaskClone allows you to easily get your tasks out of Evernote and in to a more robust task application. 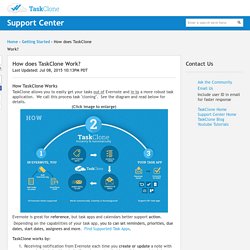 We call this process task "cloning". See the diagram and read below for details. (Click image to enlarge) ​Evernote is great for reference, but task apps and calendars better support action. iOS Beta Team Beta Recruitment. Send Google Mail to Evernote - HarryOnline. Evernote is a great system to organize your notes, and to remember everything. 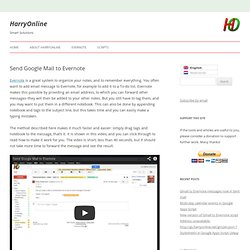 You often want to add email message to Evernote, for example to add it to a To-do list. Evernote makes this possible by providing an email address, to which you can forward other messages–they will then be added to your other notes. But you still have to tag them, and you may want to put them in a different notebook. Send Google Mail to Evernote - HarryOnline. Discussion.evernote.com/topic/48078-automatically-send-gmail-messages-to-evernote-and-set-multiple-tags-and-a-reminder/

For me, the best way to selectively send email messages from Gmail into Evernote is by using Harry's script: Basically you use Gmail labels to choose which Evernote notebook will receive the message and to add your own Evernote tags. 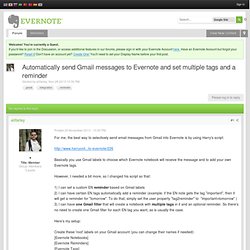 However, I needed a bit more, so I changed his script so that: 1) I can set a custom EN reminder based on Gmail labels. Two Ways to Evernote Note Links to Get Things Done and Be Productive. I know. 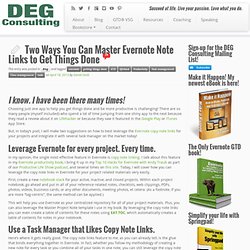 I have been there many times! Choosing just one app to help you get things done and be more productive is challenging! There are so many people (myself included) who spend a lot of time jumping from one shiny app to the next because they read a review about it on Lifehacker or because they saw it featured in the Google Play or iTunes App Store. But, in today’s post, I will make two suggestions on how to best leverage the Evernote copy note links for your projects and integrate it with several task manager on the market today!

Leverage Evernote for every project. In my opinion, the single most effective feature in Evernote is copy note linking. First, create a new notebook stack for your active, inactive, and closed projects. This will help you use Evernote as your centralized repository for all of your project materials. Use a Task Manager that Likes Copy Note Links. Here’s where it gets really good. Freeplane Tutorial Extensions. If you are not English: see Translated wiki pages if this tutorial has been translated into your language. 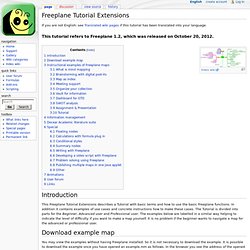 This tutorial refers to Freeplane 1.2, which was released on October 20, 2012. This Freeplane Tutorial Extensions describes a Tutorial with basic terms and how to use the basic Freeplane functions. In addition it contains examples of use cases and concrete instructions how to make these cases. The Tutorial is divided into parts for the Beginner, Advanced user and Professional user.

The examples below are labelled in a similar way helping to indicate the level of difficulty if you want to make a map yourself. You may view the examples without having Freeplane installed. What is mind mapping Mind mapping is a technique for collecting, developing and sharing ideas (like the plot of a story or threads of a new idea) in a visual map.

The mind map on the right shows you some of the processes involved. The advantages of Freeplane are presented in the mind map, as hidden information. ActiveInbox: Make your Inbox your Donebox. Development. Mind Map Tips. Business Model ToolBox. Getting Things Done: Using Gmail, Toodledo, and Evernote to Achieve Inbox Zero. Many people often ask how I manage to juggle so many different responsibilities and still be able to stay on top of it all. 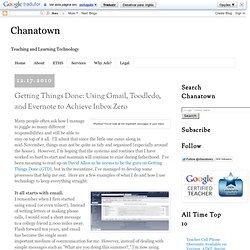 I'll admit that since the little one came along in mid-November, things may not be quite as tidy and organized (especially around the house). Integrate Your Apps · Zapier. Send Gmail to Evernote: an overview of the tools. Updated 28 June 2013: both Evernote Web Clipper and Powerbot have new versions, the table refers to these new versions. 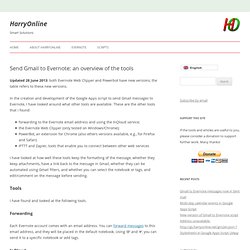 In the creation and development of the Google Apps script to send Gmail messages to Evernote, I have looked around what other tools are available. These are the other tools that I found: forwarding to the Evernote email address and using the InQloud service;the Evernote Web Clipper (only tested on Windows/Chrome);PowerBot, an extension for Chrome (also others versions available, e.g., for Firefox and Safari)IFTTT and Zapier, tools that enable you to connect between other web services. Evernote Tips: The 11 Amazing Features That Make Using Evernote So Freaking Awesome. Danielegold. Adding content to Evernote using email. Using Evernote for GTD. I use notebooks in a completely different way for GTD. 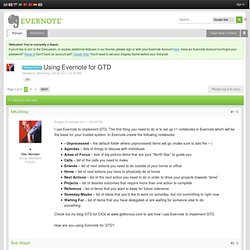 I have notebook stacks for the organizing categories describe best in Making it All Work: inbox, incubating, outcomes, reference, and support. Not everything about GTD is actions. Filing and organization is part of it. So notes move through the process, from inbox, to support, and eventually to reference, where they stay. My tags include tags for areas of focus: family, work, finances, etc. Evernote for GTD? « Thameera's MicroBlog. Life is boring. 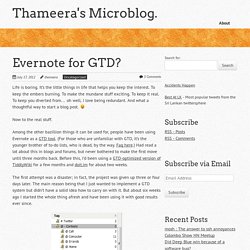 It’s the little things in life that helps you keep the interest. To keep the embers burning. To make the mundane stuff exciting. To keep it real. To keep you diverted from… oh well, I love being redundant. Evernote & Gmail Integrations. Setting Up The Secret Weapon. Mac Version: Download the latest version of Evernote (EN). Install it. GTD Software Comparison - 164 Researched Apps. ActiveInbox: Make your Inbox your Donebox. Pocket Informant Pro // Evernote Devcup 2013. Be a Productivity Ninja: Calendar, Tasks, Notes & Contacts. Built with over 10 years of mobile calendaring prowess, we've focused on the best user experience for the power user - as well as those who need just a bit more than the built-in apps provide. And now with Evernote and Pocket Informant, you can integrate your tasks,events, and notes in a way that's not possible with any other application. View your Evernote Todos on our calendar alongside your other events and tasks - mark each one off as you do it!

In addition: • WEATHER (available as an in-app purchase) to show weather in all calendar views • NATURAL LANGUAGE EVENT AND TASK CREATION - Enter phrases like “Coffee with Mom every Tuesday at 6am”. Get Organized!: Using TaskClone to Link Evernote to Your To-Do List. In the last post, we examined the challenges involved with notes from meetings and phone calls.

Follow-up is needed to ensure the to-dos and future appointments you trap in your notes are extracted and entered on your to-do list and calendar. We also examined the importance of linking the to-dos and future appointments to the original notes. Those challenges exist regardless of whether notes are paper-based or digital, and regardless of whether the to-so list and calendar are paper-based or digital. Mobile devices are becoming ubiquitous in today's world of work. How to Use Evernote with an iPad to Take Meeting Notes. In 2004, I bought a Toshiba Tablet PC. I had hoped I could use it for taking notes in meetings, using Microsoft’s OneNote software. However, after a few months, I gave up. The system was just too clunky. I resigned myself to using a Moleskine notebook for taking notes in meetings. However, a few weeks ago, I was sitting in a meeting with one of our authors.

If you are just getting started with Evernote, I suggest that you buy Brett Kelly’s remarkably practical e-book, Evernote Essentials, Second Edition. Although I had bought an iPad, I wasn’t that impressed with it. Watching these people type into their iPads made me re-think my position. Since that time, I have replaced my faithful Moleskine notebook with an iPad running Evernote. Here’s why: The iPad is just a little bigger than my Moleskine notebook. I have adapted my paper note-taking system to Evernote, using the following notations symbols for the four types of items that require follow-up: The system is not perfect. Gmail and Evernote Integration with Powerbot. ActiveInbox: Make your Inbox your Donebox. Hold up... this is an extreme use of ActiveInbox & Gmail! So we are clear from the start, we only expect a small niche to use ActiveInbox & Gmail as their full task manager.

Most people use ActiveInbox as an email manager that handles most of the small, fast flowing and badly formatted tasks within Gmail; and keeps your main task manager unburdened and free to focus on the bigger picture. I.e. ActiveInbox works well alongside your regular task management system. This is achieved by efficiently keeping as much as possible in Gmail, and exporting only a handful of big, or collaborative, or domain-specific emails to your task/project manager, CRM, issue tracker or knowledge base when it makes sense to do so. This article, however, is about ditching as many of those other systems as possible - maybe even all of them - and doing all your task management inside Gmail. Beware! The Pros & Cons of using Gmail for task management Pros Cons. Two ways to import your transactions into Wave : Wave Support. Wave - Free online accounting for small business. Organise Receipts - Shoeboxed - Scan, Email or Mail Receipts - 1300 00 1333. Ruud Hein »  Evernote GTD How To.

Freeplane. Microsoft Access vs. Microsoft Excel for Data Analysis and Reporting (Spreadsheets versus Databases) Top 10 reasons to use Access with Excel. Top 4 Apps for Calendar And Toodledo (iPhone/iPad)