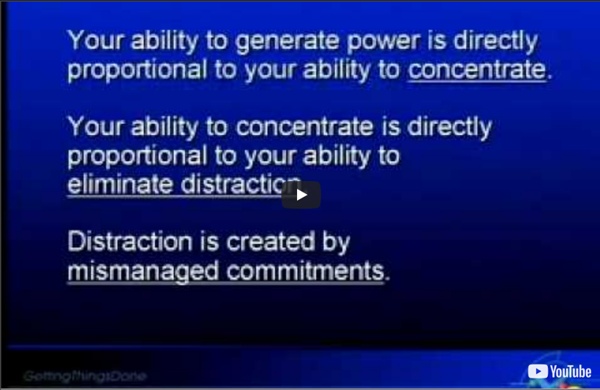 Getting Things Done The GTD method rests on the idea of moving planned tasks and projects out of the mind by recording them externally and then breaking them into actionable work items. This allows attention to be focused on taking action on tasks, instead of recalling them.[2] First published in 2001, a revised edition of the book was released in 2015 to reflect the changes in information technology during the preceding decade. Themes[edit] Allen first demonstrates stress reduction from the method with the following exercise, centered on a task that has an unclear outcome or whose next action is not defined. He claims stress can be reduced and productivity increased by putting reminders about everything you are not working on into a trusted system external to your mind. Workflow[edit] Logic tree diagram illustrating the second and third steps (process/clarify and organize) of the five-step Getting Things Done workflow. Next, reflection (termed planning in the first edition) occurs. Implementation[edit]

Khan Academy Calendaring software Calendaring software is software that minimally provides users with an electronic version of a calendar. Additionally, the software may provide an appointment book, address book, and/or contact list. These tools are an extension of many of the features provided by time management software such as desk accessory packages and computer office automation systems. Calendaring is a standard feature of many PDAs, EDAs, and smartphones. The software may be a local package designed for individual use (e.g. Lightning extension for Mozilla Thunderbird, Microsoft Outlook without Exchange Server, or Windows Calendar) or may be a networked package that allows for the sharing of information between users (e.g. Features[edit] Calendaring software will contain one or more of the following features: Examples[edit] See also[edit] External links[edit]

nibipedia Etherpad Etherpad (previously known as EtherPad)[1][2] is a web-based collaborative real-time editor, allowing authors to simultaneously edit a text document, and see all of the participants' edits in real-time, with the ability to display each author's text in their own color. There is also a chat box in the sidebar to allow meta communication. First launched in November 2008, the software was acquired by Google in December 2009 and released as open source later that month. Several services now use the Etherpad software, including PiratePad, Telecomix Pad, Framapad, Mozilla Pad (MoPad), PrimaryPad, QikPad, and TitanPad. Further development is coordinated by the Etherpad Foundation. Features and implementation[edit] Anyone can create a new collaborative document, known as a "pad". The software auto-saves the document at regular, short intervals, but participants can permanently save specific versions (checkpoints) at any time. Launch[edit] Acquisition[edit] Open-source[edit] Etherpad Lite[edit]

MindMeisiter Popplet Time management Time management is the act or process of planning and exercising conscious control over the amount of time spent on specific activities, especially to increase effectiveness, efficiency or productivity. It is a meta-activity with the goal to maximize the overall benefit of a set of other activities within the boundary condition of a limited amount of time. Time management may be aided by a range of skills, tools, and techniques used to manage time when accomplishing specific tasks, projects, and goals complying with a due date. Initially, time management referred to just business or work activities, but eventually the term broadened to include personal activities as well. A time management system is a designed combination of processes, tools, techniques, and methods. The major themes arising from the literature on time management include the following: Time management has been considered to be a subset of different concepts such as: Project management. Some[which?] Writers[who?]