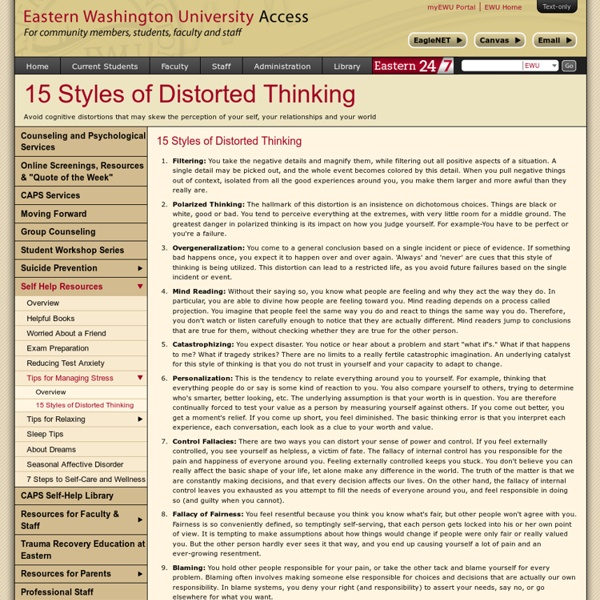 Madonna–whore complex In sexual politics the view of women as either Madonnas or whores limits women's sexual expression, offering two mutually exclusive ways to construct a sexual identity.[4] The term is also used popularly, often with subtly different meanings. Causes[edit] Why Atheism Will Replace Religion: New Evidence Atheists are heavily concentrated in economically developed countries, particularly the social democracies of Europe. In underdeveloped countries, there are virtually no atheists. Atheism is a peculiarly modern phenomenon. Why do modern conditions produce atheism? A Guide to Fake News Websites Satire is a venerable form of social commentary that uses humor to ridicule human vices and follies. The Internet is rife with it, especially news satire, or fake news, in which fictionalized accounts of current events are presented in mock-journalistic style to lampoon politicians, celebrities, and social mores. Satire is only effective if people recognize it as such, however, and therein lies a major pitfall of publishing fake news on the Internet. Users tend to skim texts instead of reading them, missing important clues and disclaimers. The mechanics of social sharing obscure the origin and aim of viral content, increasing the likelihood that fiction will be mistaken for, or purposely misrepresented as, fact. Below is a checklist of the most popular fake news sites on the web.

The Lesson of the Monkeys I was first told of this experiment* by a former work colleague, and later discovered this illustration of it. It’s both illuminating and disturbing. There is a clunky word that describes this phenomenon: filiopietism, or the reverence of forebears or tradition carried to excess. But I prefer another term for it: the tragic circle. I believe many of these tragic circles exist, mostly unseen, in across all cultures and societites, causing untold harm. Marriage Builders Articles - Q&A Columns My Basic Concepts will help you resolve your marital conflicts and restore love to your marriage. But after reading these concepts, you may have a few questions about how they can be applied to your situation. Over the years, I have received thousands of these questions, and have answered many of them.

Stockholm syndrome Stockholm syndrome, or capture-bonding, is a psychological phenomenon in which hostages express empathy and sympathy and have positive feelings toward their captors, sometimes to the point of defending and identifying with the captors. These feelings are generally considered irrational in light of the danger or risk endured by the victims, who essentially mistake a lack of abuse from their captors for an act of kindness.[1][2] The FBI's Hostage Barricade Database System shows that roughly 8 percent of victims show evidence of Stockholm syndrome.[3] Stockholm syndrome can be seen as a form of traumatic bonding, which does not necessarily require a hostage scenario, but which describes "strong emotional ties that develop between two persons where one person intermittently harasses, beats, threatens, abuses, or intimidates the other.

7 Skills To Become Super Smart People aren’t born smart. They become smart. And to become smart you need a well-defined set of skills. Here are some tips and resources for acquiring those skills. Memory If you can’t remember what you’re trying to learn, you’re not really learning. Breaking News Consumer's Handbook: Fake News Edition - On The Media BROOKE GLADSTONE: Drawing a distinction between fake and real news is going to be hard for those Facebook and Google employees tasked with bird dogging offending sites, but it shouldn’t be so hard for you, the consumer. Melissa Zimdars, professor of communication and media at Merrimack College, has made a list of more than a hundred problematic news sites, along with tips for sorting out the truthful from the troublesome. She got into the fake news sorting racket after a hot tip. MELISSA ZIMDARS: Someone alerted me to the fact that when you searched for the popular vote on Google, the first Google news item that came up was a fake news website saying that Hillary Clinton lost the popular vote. BROOKE GLADSTONE: Mm-hmm.

Contrasting and categorization of emotions The contrasting and categorisation of emotions describes how emotions are thought to relate to each other. Various recent proposals of such groupings are described in the following sections. Contrasting Basic Emotions[edit] Hedgehog's dilemma Both Arthur Schopenhauer and Sigmund Freud have used this situation to describe what they feel is the state of individual in relation to others in society. The hedgehog's dilemma suggests that despite goodwill, human intimacy cannot occur without substantial mutual harm, and what results is cautious behavior and weak relationships. With the hedgehog's dilemma, one is recommended to use moderation in affairs with others both because of self-interest, as well as out of consideration for others. The hedgehog's dilemma is used to explain introversion and isolationism. Schopenhauer[edit]

120 Ways to Boost Your Brain Power Here are 120 things you can do starting today to help you think faster, improve memory, comprehend information better and unleash your brain’s full potential. Solve puzzles and brainteasers.Cultivate ambidexterity. Use your non-dominant hand to brush your teeth, comb your hair or use the mouse. Fake News - Resources from Harvard Skip to main content Fake News, Misinformation, and Propaganda This page provides background information, links, and tools from outside organizations to help guide users in navigating potential fake news A Visual Take Library Resources Using library databases is a near-foolproof way to find credible information.