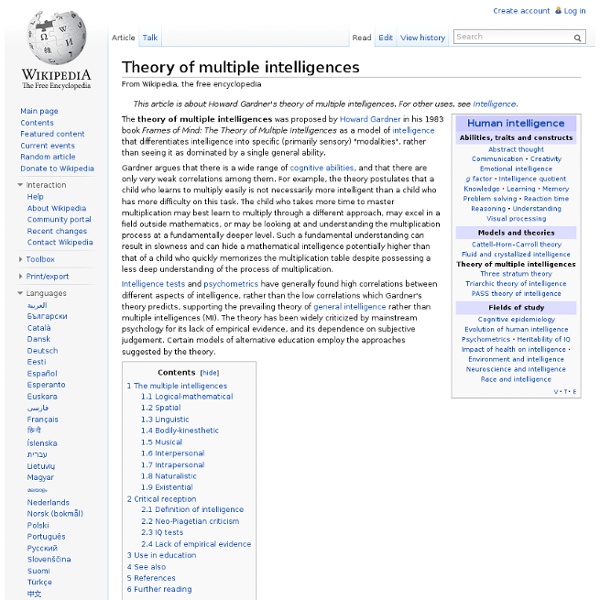 The theory of multiple intelligences is a theory of intelligence that differentiates it into specific (primarily sensory) "modalities", rather than seeing intelligence as dominated by a single general ability. This model was proposed by Howard Gardner in his 1983 book Frames of Mind: The Theory of Multiple Intelligences. Gardner articulated seven criteria for a behavior to be considered an intelligence.[1] These were that the intelligences showed: potential for brain isolation by brain damage, place in evolutionary history, presence of core operations, susceptibility to encoding (symbolic expression), a distinct developmental progression, the existence of savants, prodigies and other exceptional people, and support from experimental psychology and psychometric findings. Gardner argues intelligence is categorized into three primary or overarching categories, those of which are formulated by the abilities. The different abilities[edit] Musical–rhythmic and harmonic[edit] Interpersonal[edit]

Zeno's paradoxes Zeno's arguments are perhaps the first examples of a method of proof called reductio ad absurdum also known as proof by contradiction. They are also credited as a source of the dialectic method used by Socrates.[3] Some mathematicians and historians, such as Carl Boyer, hold that Zeno's paradoxes are simply mathematical problems, for which modern calculus provides a mathematical solution.[4] Some philosophers, however, say that Zeno's paradoxes and their variations (see Thomson's lamp) remain relevant metaphysical problems.[5][6][7] The origins of the paradoxes are somewhat unclear. Diogenes Laertius, a fourth source for information about Zeno and his teachings, citing Favorinus, says that Zeno's teacher Parmenides was the first to introduce the Achilles and the tortoise paradox. But in a later passage, Laertius attributes the origin of the paradox to Zeno, explaining that Favorinus disagrees.[8] Paradoxes of motion[edit] Achilles and the tortoise[edit] Dichotomy paradox[edit]

Brain-based Learning Design Principles 12 Design Principles Based on Brain-based Learning Research By Jeffery A. Lackney, Ph.D. Based on a workshop facilitated by Randall Fielding, AIA Rich-simulating environments – color, texture, "teaching architecture", displays created by students (not teacher) so students have connection and ownership of the product. This list is not intended to be comprehensive in any way. A second caveat to presenting these design principles for brain-compatible learning environments concerns the need to use as many of these principles in combination in the design of a school building as possible. Workshop Summary Narrative: The objectives of the brain-based workshop track of the CEFPI Midwest Regional Conference were to: (a) understand the latest developments and findings from brain research; (b) discuss how these findings may educational curriculum and instruction for learning; and (c) explore what the implications these findings may have on school design. www.designshare.com

List of thought processes - Wikipedia, the free encyclopedia - Iceweasel Nature of thought[edit] Thought (or thinking) can be described as all of the following: An activity taking place in a: brain – organ that serves as the center of the nervous system in all vertebrate and most invertebrate animals (only a few invertebrates such as sponges, jellyfish, adult sea squirts and starfish do not have a brain). It is the physical structure associated with the mind. mind – abstract entity with the cognitive faculties of consciousness, perception, thinking, judgement, and memory. Having a mind is a characteristic of humans, but which also may apply to other life forms.[1][2] Activities taking place in a mind are called mental processes or cognitive functions.computer (see automated reasoning, below) – general purpose device that can be programmed to carry out a set of arithmetic or logical operations automatically. Types of thoughts[edit] Content of thoughts[edit] Types of thought (thinking)[edit] Listed below are types of thought, also known as thinking processes. Lists

Ten things learned on my leadership journey | John Dunford Consulting 1. Be creative Dream your dreams and go into school the next day and put them into action. Although many people complain about the pressures of accountability – with some justification – there is still plenty of space for creativity in school leadership. Being creative does not necessarily mean thinking of original ideas. 2. When I was appointed as a head, I told the appointment committee that it was my job to water the plants. But, as in the garden, not all the human plants need the same amount of water and nurturing. 3. School leaders are part of a great movement to increase the life chances of young people by raising their aspirations and achievement. Of course, all school leaders want their school to be the best and work long hours towards that admirable goal, but this should not be at the expense of other schools. 4. An inspector once asked me about my leadership style and I told him to go and ask the people I led. 5. A values-led school is almost always a good school. 6. 7. 8. 9.

List of Chinese military texts Chinese military texts have existed ever since Chinese civilization was founded. China's armies have long benefited from this rich strategic tradition, influenced by texts such as Sun Tzu's The Art of War, that have deeply influenced military thought.[1] Although traditional Chinese Confucian philosophy favoured peaceful political solutions and showed contempt for brute military force, the military was influential in most Chinese states. The works of well known strategists such as Sun Tzu and Sun Bin have heavily influenced military philosophy, warfare, and political discourse throughout China's long history. Works such as The Art of War have also found a strong following around the world, where they have influenced people as far ranging as the Chinese Communist Party and the former Secretary of Defense Donald Rumsfeld.[2] Overview[edit] The most well known of these military texts are the Seven Military Classics. Usage[edit] Military Texts[edit] Seven Military Classics[edit] Others[edit]

E-Prime Some scholars advocate using E-Prime as a device to clarify thinking and strengthen writing.[1] For example, the sentence "the film was good" could not be expressed under the rules of E-Prime, and the speaker might instead say "I liked the film" or "the film made me laugh". The E-Prime versions communicate the speaker's experience rather than judgment, making it harder for the writer or reader to confuse opinion with fact. History[edit] D. Bourland collected and published three volumes of essays in support of his innovation. Bourland and Johnston edited a third book E-Prime III: a third anthology: 1997, Concord, California: International Society for General Semantics. Korzybski (1879–1950) had determined that two forms of the verb 'to be'—the 'is' of identity and the 'is' of predication—had structural problems. Different functions of "to be"[edit] Rationale[edit] Some languages already treat equivalents of the verb "to be" differently without obvious benefits to their speakers.

The United States Army | SWCS By Jeffrey Hasler Originally published in the July-September 2012 edition of Special Warfare “Let China sleep, for when she awakens the whole world will tremble.” — Napoleon Bonaparte After a decade of large land-power campaigns in southwest Asia and the U.S. The Chinese military tradition is especially characterized by an emphasis on indirectness, multiple paths to an objective, centrality of deception and secrecy and a regard for outright treachery which is probably counterintuitive to most western readers. There is voluminous comment of the effect of the Confucian tradition throughout all of Chinese (and east Asian) culture. More pertinent are other contemporary ancient Chinese classics; Lao Tzu’s Tao Te Ching, and Sun Tzu’s The Art of War. Most philosophers of war rightly consider Sun Tzu’s The Art of War to be one of the timeless classics of war philosophy. There are many more. There is much more than these few quotes. Mr. Notes 1. 2. 3. 4. 5. 6. 7. 8. 9.