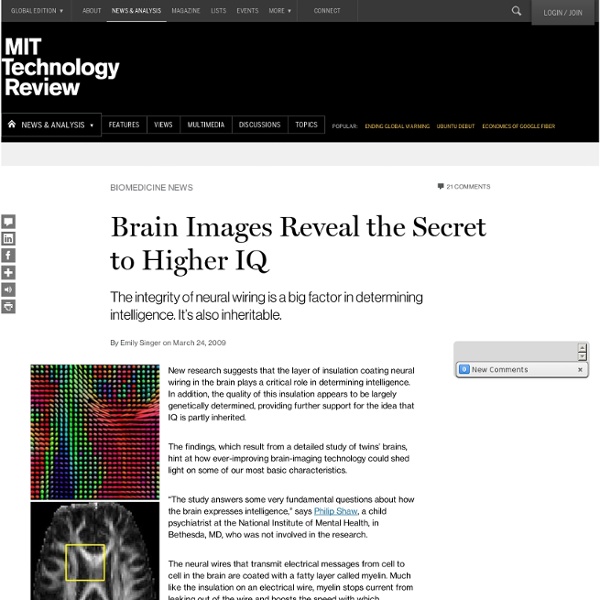 New research suggests that the layer of insulation coating neural wiring in the brain plays a critical role in determining intelligence. In addition, the quality of this insulation appears to be largely genetically determined, providing further support for the idea that IQ is partly inherited. The findings, which result from a detailed study of twins’ brains, hint at how ever-improving brain-imaging technology could shed light on some of our most basic characteristics. “The study answers some very fundamental questions about how the brain expresses intelligence,” says Philip Shaw, a child psychiatrist at the National Institute of Mental Health, in Bethesda, MD, who was not involved in the research. The neural wires that transmit electrical messages from cell to cell in the brain are coated with a fatty layer called myelin. Thompson and his colleagues took DTI scans of 92 pairs of fraternal and identical twins.

Finding the Core of the Brain The iconic image of the brain is a misshapen, yellowish lump. Existing technology can show which parts of the lump light up when people think, but a real understanding of how the brain works demands a better picture of the nerve fibers that ferry electrical signals between brain cells. Those fibers, however, are so small and tangled that researchers haven’t been able to see them clearly. Now, an international team of scientists has combined a new variation on magnetic resonance imaging with mathe­matical analysis to generate the first detailed map of the network of connections in the human cortex, the part of the brain responsible for higher-order thinking. Diffusion spectrum imaging–which tracks water mole­cules moving along nerve fibers–gave the scientists a wiring map of the cortex, revealing points where multiple nerve fibers converged. The scientists then used a mathematical technique to repeatedly prune away the connection points with the fewest links.

The Brain Unveiled A new imaging method that offers an unprece­dented view of ­complex neural structures could help explain the workings of the brain and shed light on neurological diseases. Interactive Tools The three tools below and on the next two pages show data gathered in different ways from a living human volunteer. In each image, the brain is viewed from the back at a three-quarter profile, with the volunteer’s eyes pointed back and toward the right. In this interactive tool, only the fibers that intersect a given vertical plane are shown in each still image. Visualizing only a subset of the brain’s densely packed neural fibers allows individual networks to be studied in greater detail.

Mapping the Brain on a Massive Scale A massive new project to scan the brains of 1,200 volunteers could finally give scientists a picture of the neural architecture of the human brain and help them understand the causes of certain neurological and psychological diseases. The National Institutes of Health announced $40 million in funding this month for the five-year effort, dubbed the Human Connectome Project. Scientists will use new imaging technologies, some still under development, to create both structural and functional maps of the human brain. The project is novel in its size; most brain-imaging studies have looked at tens to hundreds of brains. Scanning so many people will shed light on the normal variability within the brain structure of healthy adults, which will in turn provide a basis for examining how neural “wiring” differs in such disorders as autism and schizophrenia.

Mapping How the Brain Matures Using a new way of analyzing brain-imaging data, scientists have mapped out how the complex networks of connections in the brain evolve as children age. The researchers are now using the technology to examine how brain development in children with specific disorders, such as autism, veers off the norm. Ultimately, researchers aim to use the technology to predict, for example, whether a child at risk for autism will actually develop the disorder, or what treatments might work best for that individual. Previous research by the same team at the Washington University School of Medicine had shown that between age five and 30, the short-range connections in the brain tend to weaken, while longer-range connections get stronger. Brain-imaging technologies that measure neural activity, such as functional magnetic resonance imaging (fMRI), have proven to be a valuable scientific tool over the last decade, but they’re still rarely used in medicine.

Intelligence Explained Brain map: Software called BrainLab analyzes data collected during a specialized MRI scan of the author’s brain in order to create a neural wiring map. The image shows a cross-section. Specific subsets of wires are highlighted (the color indicates the direction of the wiring going through that slice). The cross-sections are computationally stitched together to create a three-dimensional image. A series of black-and-white snapshots is splayed across the screen, each capturing a thin slice of my brain. Frew is giving me a tour of my white matter–the tissue connecting the neurons, or nerve cells, that make up gray matter. Scientists have been searching more than two centuries for the source of intelligence–the general cognitive ability often quantified in the form of IQ. Until fairly recently, only a few scientists were studying how brain structure might be related to IQ, in part because the idea of a biological and genetic basis for intelligence has long been controversial.

The Brain Unmasked The typical brain scan shows a muted gray rendering of the brain, easily distinguished by a series of convoluted folds. But according to Van Wedeen, a neuroscientist at Massachusetts General Hospital, in Boston, that image is just a shadow of the real brain. The actual structure–a precisely organized tangle of nerve cells and the long projections that connect them–has remained hidden until relatively recently. Traditional magnetic resonance imaging, or MRI, can detect the major anatomical features of the brain and is often used to diagnose strokes and brain tumors. But advances in computing power and novel processing algorithms have allowed scientists to analyze the information captured during an MRI in completely new ways. Diffusion spectrum imaging (DSI) is one of these twists. On the medical side, radiologists are beginning to use the technology to map the brain prior to surgery, for example, to avoid important fiber tracts when removing a brain tumor.

Old Blood Impairs Young Brains  It’s a cliché of vampire tales that young blood is preferable to old, but a new study suggests there’s some truth to it. A paper published today in Nature finds that when younger mice are exposed to the blood of older mice, their brain cells behave more like those found in aging brains, and vice versa. The researchers who carried out the work also uncovered chemical signals in aged blood that can dampen the growth of new brain cells, suggesting that the decline in brain function with age could be caused in part by blood-borne factors rather than an intrinsic failure of brain cells. To arrive at the discovery, the researchers studied pairs of old and young mice that were literally joined at the hip. Lead author Tony Wyss-Coray, a neuroscientist at Stanford University, says that five weeks after creating these May-December pairings, “we found striking effects both on the young and old brains.”

Fluorescent Protein Lights Up the Inner Workings of the Brain Interactions between neurons involve both chemical and electrical signaling. For decades, neuroscientists have searched for a noninvasive way to measure the electrical component. Achieving this could make it easier to study how the brain works, and how neurological disease impairs its functioning. One promising approach is tracking neuronal electrical activity with fluorescence, which can be integrated into cells fairly easily through genetics or by being attached to antibodies, but which can be toxic and slow to work. Last week, researchers introduced a new candidate—a fluorescent protein from a Dead Sea microbe—that appears to be better equipped for the challenge. The protein, called archaerhodopsin-3, or Arch, was discovered more than 10 years ago, but scientists are just now starting to realize its potential as a research tool. In this study, the researchers took the opposite tack and used electricity to elicit changes in Arch’s fluorescence.