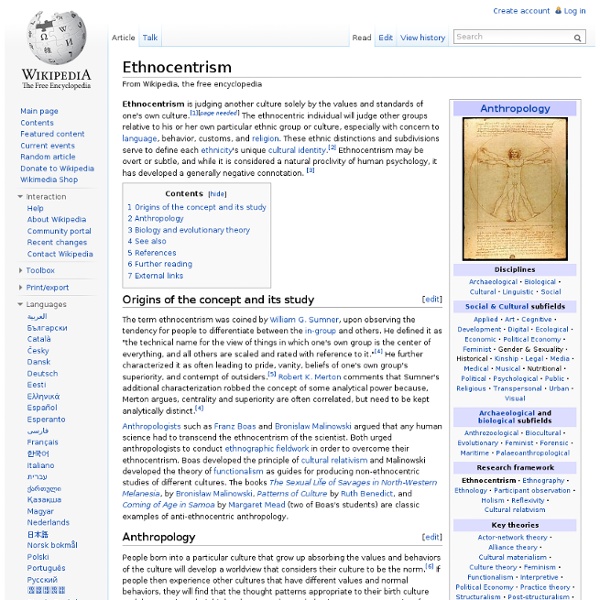 Ethnocentrism is judging another culture solely by the values and standards of one's own culture.[1][page needed] Ethnocentric individuals judge other groups relative to their own ethnic group or culture, especially with concern for language, behavior, customs, and religion. These ethnic distinctions and subdivisions serve to define each ethnicity's unique cultural identity.[2] Ethnocentrism may be overt or subtle, and while it is considered a natural proclivity of human psychology, it has developed a generally negative connotation.[3] Origins of the concept and its study[edit] William G. Anthropologists such as Franz Boas and Bronislaw Malinowski argued that any human science had to transcend the ethnocentrism of the scientist. Anthropology[edit] Examples of ethnocentrism include religiocentric constructs claiming a divine association like "divine nation", "One Nation under God", "God's Own Country", "God's Chosen People", and "God's Promised Land".[8] See also[edit] References[edit] Related:  Antropologia, etnologia, sociologia

Syllabus Anth 330 Syllabus, Anthropology 330 Origins of Culture & Civilization Fall Semester 2001 College 220, MWF 12:10 Professor: T. A. Kohler Office: College Hall 394/396 Office Hours: M, Th 8-9:30 AM (or by appointment) Phone: 335-2698; e-mail tako@wsu.edu I. To explore cultural evolution and diversity from the origins of the earliest hominids to the beginnings of state societies in the Old World, covering a time span of some 4 million years. the archaeology of the first hominids; the problem of the evolution of human cooperation; the in-creas-ing use of symbols in human communication in Upper Paleolithic art and in the appearance of writing; the rise and spread of the agricultural way of life and the formation of villages and towns; and the appearance and spread of "complex," state-level societies. This course is designed to serve both majors in anthropology (typically 30-40% of the class), and as a Tier II S GER. II. Class will meet M, W, & F at 12:10 for 50 minutes. III. IV. V. 1. 2. 3. 4. 5. 6.

:: S.I.Lex :: | Au croisement du droit et des sciences de l'information. Aarne–Thompson–Uther Index Index used to classify folk narratives The Aarne–Thompson–Uther Index (ATU Index) is a catalogue of folktale types used in folklore studies. The ATU Index is the product of a series of revisions and expansions by an international group of scholars: Originally composed in German by Finnish folklorist Antti Aarne (1910); the index was translated into English, revised, and expanded by American folklorist Stith Thompson (1928, 1961); and later further revised and expanded by German folklorist Hans-Jörg Uther (2004). The ATU Index, along with Thompson's Motif-Index of Folk-Literature (1932) (with which it is used in tandem) is an essential tool for folklorists.[1] Definition of tale type[edit] In The Folktale, Thompson defines a tale type as follows: A type is a traditional tale that has an independent existence. Predecessors[edit] History[edit] System[edit] The Aarne–Thompson Tale Type Index divides tales into sections with an AT number for each entry. 510A Cinderella. Critical response[edit]

Goethe on the Psychology of Color and Emotion Color is an essential part of how we experience the world, both biologically and culturally. One of the earliest formal explorations of color theory came from an unlikely source — the German poet, artist, and politician Johann Wolfgang von Goethe, who in 1810 published Theory of Colors (public library; public domain), his treatise on the nature, function, and psychology of colors. Though the work was dismissed by a large portion of the scientific community, it remained of intense interest to a cohort of prominent philosophers and physicists, including Arthur Schopenhauer, Kurt Gödel, and Ludwig Wittgenstein. One of Goethe’s most radical points was a refutation of Newton’s ideas about the color spectrum, suggesting instead that darkness is an active ingredient rather than the mere passive absence of light. YELLOWThis is the color nearest the light. Brain Pickings has a free weekly newsletter.

Anthropology Resources on the Internet This resource area is meant to be used as a tool for finding information on anthropology that is available on the web. Please note other Resource links to on the left hand site and look at the Careers Development pages for information on funding opportunities. AAA is not responsible for and does not endorse the following websites, but merely provides the information. Anthropologists Archaeology Resources Biological/Physical Anthropology Ethnography Etnografia.it Available in both English and Italian Ethnographic Studies Internet Resources Page Collection of resources in anthropology, ethnomusicology, folklore and folklife, by the Library of Congress OSEA The Open School of Ethnography and Anthropology Non-degree school that offers ethnographic training programs to undergraduates and graduate students, including a summer field school, a winter ethnography study abroad program and an ethnography writer's workshop. General Resources Listservs and Discussion Groups Online Journals and Libraries

I think I know where babies come from, therefore I am human Throughout most of evolutionary history, sex was just sex. Among vertebrates, fish were the first to do it, going back some 400 million years. While it might be fun for fish and all the other species that evolved to reproduce sexually, for most species, sex still is just sex. But for our own peculiar species of primate, sex is about something more. Sex is about babymaking. Contemplating sex and where we come from has played a fundamental role in human mating, partnering and raising children, and in forming families, communities and alliances, and more. All sexually reproducing animals have a powerful ‘sex drive’. Stories about what make humans unique glorify dexterous fingers, inventive minds and our habit of sharing complex ideas through intricate verbal cues. Updates on everything new at Aeon. Pop culture is obsessed with sex, and science is no different. We share many genes even with fruit flies, but we share far more with non-human primates. In his book Why Is Sex Fun?

40 Great Anthropology Books That Anyone Can Appreciate Humans studying humans is what anthropology essentially boils down into. Considering what all the subject entails, it comes as no shock to anyone at all that many find it absolutely gripping. But not everyone ends up with a formal education or profession in or near the field, thus rendering some reads a little too technical. But fortunately, a right fair amount of excellent popular anthropology books exist to make the extremely nuanced topic accessible to anyone. As anthropology feeds from such a diverse range of scientific and liberal arts subjects, this list (which reflects no intentional order) seeks to reflect that structure rather than focusing on one in particular.

Science Says War Is Over Now (Given the Right Conditions) | Human Evolution Fry has also identified 74 “nonwarring cultures” that—while only a fraction of all known societies—nonetheless contradict the depiction of war as universal. His list includes nomadic hunter-gatherers such as the !Kung in Africa and Aborigines in Australia. These examples are crucial, Fry says, because our ancestors are thought to have lived as nomadic hunter-gatherers from the emergence of the Homo lineage just over 2 million years ago in Africa until the appearance of agriculture and permanent settlements about 12,000 years ago. That time span constitutes 99 percent of our history. Lethal violence certainly occurred among those nomadic hunter-gatherers, Fry acknowledges, but for the most part it consisted not of genuine warfare but of fights between two men, often over a woman. Fry has sought to determine what distinguishes peaceful societies from more violent ones. Fry believes that empowering females may reduce the rate of violence committed within and by a nation.