I`m a freelance illustrator and designer based in Lisbon (Portugal). At the moment I am doing my PHD in design in IADE Creative University and experimenting with illustration and photography.

Gladys Orteza transforms stock market charts into landscapes. Despite the lockdown, despite the canceled trips, despite the postponed festivals, this year the street artists did not give up and continued to create and transform city streets into open-air museums. 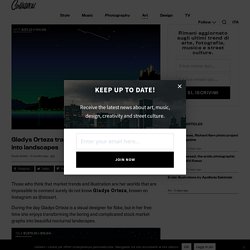 Let’s review together the best artworks of this year! Saype arrives in Italy with Beyond Walls Two hands joining in a chain that knocks down the walls, both physical and mental. This is the image that appeared in June 2019, in all its majesty, at the foot of the Eiffel Tower, and it is the same image that also appeared in Turin this year. It is the work of Saype, a French-Swiss land artist who a year and a half ago created the project “Beyond Walls“. Amaury Dubois’ fresco in a Church of Châtelaillon-Plage Created inside the Church of Sainte-Madeleine in Châtelaillon-Plage, a French town overlooking the sea, the work of the artist Amaury Dubois has earned the title of one of the largest frescoes ever painted inside a French church. Conjugate "sentir" - French conjugation - bab.la verb conjugator. 2 Pronunciations for plui in French.

Artistic Scans by Hargreaves+Levin Reveal Beauty Of Food. Hargreaves + Levin creates a series of food scans that showcases the beauty of seasonal fruit and vegetables. 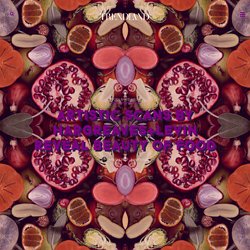 Exposing nature’s own artistry, the project focuses on natural details and curves, where composition and symmetry are the only form of adornment. Simply placed on the scanner, figs, corn or asparagus are put into slightly surreal contexts and unveil their inner beauty on image. Page d'accueil - One Minute Project. ILLUSTRATION Archives. Nicole Kidman and Clive Owen in An Affair to Remember. Face fitness. Photerloo - Photo Sharing and Stock Tool For Photographers. 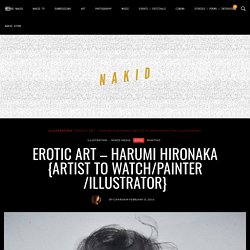 She is all about expressing herself and her somewhat disturbed personality which echoes in her work. She has created these haunting, colorful, sensual illustrations that we just can’t get enough of, enjoy! Collezionismo: Satanik – C4 Comic. Nick Gazin's Comic Book Love-in #59. Hey hey hey hey hey hey hey, How are you? 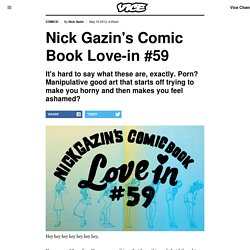 I am fine. Here are some things that I saw this week that I thought were interesting or pretty. Agenda do IADE - Universidade Europeia. Конверторы - купить с доставкой или самовывозом по Москве и России, описание, цены, отзывы, характеристики. 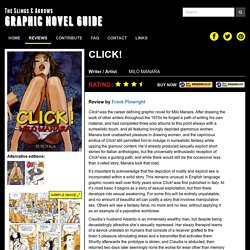 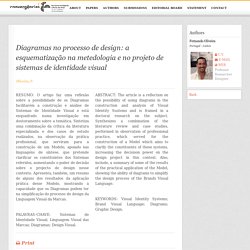 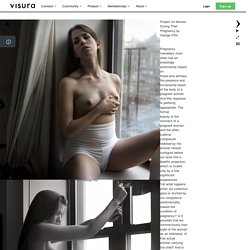 Minimalism with a Japanese edge. As a post-war art movement, minimalism spanned its influence across all realms of culture and thought, most notably through architectural design. 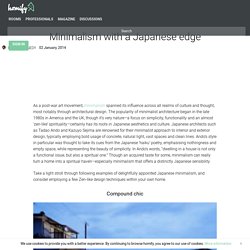 The popularity of minimalist architecture began in the late 1980s in America and the UK, though it’s very nature—a focus on simplicity, functionality and an almost ‘zen-like’ spirituality—certainly has its roots in Japanese aesthetics and culture. Japanese architects such as Tadao Ando and Kazuyo Sejima are renowned for their minimalist approach to interior and exterior design, typically employing bold usage of concrete, natural light, vast spaces and clean lines. Ando’s style in particular was thought to take its cues from the Japanese ‘haiku’ poetry, emphasising nothingness and empty space, while representing the beauty of simplicity.

Minimalism Is... Shortly after my interest in minimalism was sparked, I started searching for common denominators and began gathering definitions and statements. 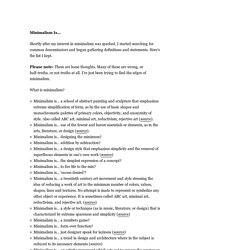 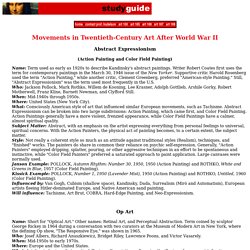 Writer Robert Coates first uses the term for contemporary paintings in the March 30, 1946 issue of the New Yorker. Supportive critic Harold Rosenberg used the term "Action Painting," while another critic, Clement Greenberg, preferred "American-style Painting. " Still, "Abstract Expressionism" was the term used most frequently in the U.S. PressReader.com - Journaux du Monde Entier. In Production: Our first ever DOUBLE ISSUE. Shooting in Riyadh when Arabia Was Poor: American film crew accepts Arabian hospitality and lunch with Saudi King I’d flown into Riyadh from Bahrain as one of a film crew; about twenty of us travelling the world in a Pan American Airways DC-4 airliner shooting scenes for the huge screen Cinerama production of Seven Wonders of the World (1956). We were there to film one man’s idea of a world wonder, the Arabian king, ‘the richest man in the world’.

Our invitation was pried loose by Lowell Thomas, a famously regular American guy, who made movies his own way.

Feminism. Fumetto. Women in comics. RESEARCH PAPER. Sex is the new yellow. According to international trend forecaster Li Edelkoort, sex is gaining importance in society and the bordello is making a comeback – with many twists. You’re probably thinking sex has always been important, but Edelkoort says that the idea of sex is becoming far more important than the actual act itself. Edelkoort’s Bordello of the 21st-Century exhibition at Amsterdam History Museum explores this proposal of sex with striptease, burlesque dancing, and a greater emphasis on fantasy and cabaret theatre.

Bondage, cybersex and “superhuman” sex is prominent – it’s time for prostitution to make sex more exciting or move on. On the other hand, amateur kinkiness is becoming more significant, with people discovering and healing each other. Dressing for Tomorrow: How Designers Are Mixing Technology, Eroticism and Fashion. Humans have always dressed for safety and success… but mostly for sex. When not protecting the wearer against the weather—or in some cases other humans—clothing has always been about sex. While materials came and went, the basic idea of fashion has stuck around. From power ties to high heels, corsets to tuxedos, jockeys to hot pants, we’ve forever been trying to accentuate, or downplay, certain parts of our anatomy. But now it looks like things will really be changing.

Frequently using what is called intelligent clothing or e-textiles, a few innovative designers are exploring wild new territories—and perhaps giving us a glimpse of the erotic fashions for the next century. States of Design 04: Critical Design - Design. This article was originally published in Domus 949, July/August 2011 Design is life, and it is therefore history. Steeped in the human condition, ideally a few steps ahead of it—and hence a political act—it follows the course of events and at critical junctures is compelled to take the lead and show the world a different way forward. Ettore Sottsass was famously eloquent on this topic, declaring in the late 1960s that design "is a way of discussing society, politics, eroticism, food and even design.

Sexual Identity and Eroticism in Writing. Juxtapoz Magazine - Rainbows on Your Nether Regions. As Canadian animator Jean Francois Painchaud posted his thrumming-rainbow-sex animations on social media, they would (unsurprisingly) survive for a bit then get taken down. Then, Facebook banned several illustrations at once and the move gained him thousands of followers via his tumblr. In an interview with VICE Colombia he said, “Whenever they take down my art or censor me, I make a big deal out of it, hoping that we might be able to change this culture of incessant censoring over time.”