This Is How Fox News Brainwashes Its Viewers: Our In-Depth Investigation of the Propaganda Cycle. 2016 presidential primary season is in full swing, which means, among other things, that Fox News’ ratings are skyrocketing. 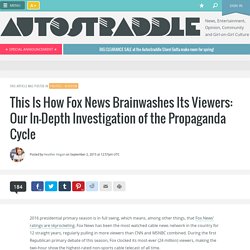 Fox News has been the most watched cable news network in the country for 12 straight years, regularly pulling in more viewers than CNN and MSNBC combined. During the first Republican primary debate of this season, Fox clocked its most-ever (24 million) viewers, making the two-hour show the highest-rated non-sports cable telecast of all time. Over the last ten years, everyone I know has lost a friend or family member or mentor to Fox News. Like me, they have watched helplessly as people they love have become part of the conservative punditry herd and, over time, traded their compassion for paranoia; their thoughtful opinions for manufactured outrage; and their empathy for hateful rhetoric. Consider Trayvon Martin. When a grand jury decided not to indict Darren Wilson for the murder of Michael Brown, Sean Hannity proved Boehlert’s claim. Isolate Viewers Ad Nauseam.

Miss Representation. Media on Oligarchy, Inequality & Wealth. The Influence of the State on the Media. Anthropology & Media Literacy. They Call this News? Advertising. So Called Entertainment News. Conflict of Interest & The Media. Image over Justice. They live among us: the new enemies of Hollywood. As Hollywood responds to the crisis of global capitalism, it has become clear that we ourselves are the ultimate threat to the prevalent social order. 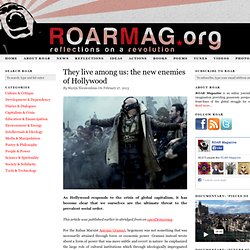 This article was published earlier in abridged from on openDemocracy For the Italian Marxist Antonio Gramsci, hegemony was not something that was necessarily attained through force or economic power. Gramsci instead wrote about a form of power that was more subtle and covert in nature: he emphasized the large role of cultural institutions which through ideologically impregnated imagery unconsciously shape our value systems. We not only give our consent to this process, but most of the time actually enjoy such experiences and are even willing to invest our time and a lot of money into it. 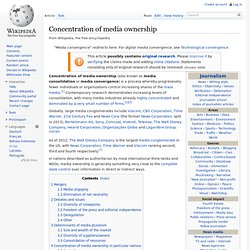 The Media & The So Called "Free Market" DN! Freedom of the Press. Media literacy, Films for Action. The World Trade Organization (WTO) held its Third Ministerial Conference in Seattle from November 30 to December 3, 1999. 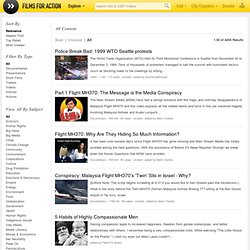 Tens of thousands of protesters managed to halt the summit with nonviolent tactics (such as blocking roads to the meetings by sitting... The Main Stream Media (MSM) have had a ratings bonanza with the tragic and untimely disappearance of Malaysia Flight MH370 and this video exposes all the related twists and turns in this yet unsolved tragedy involving Malaysia Airlines and Kuala Lumpur's... It has been over several day's since Flight MH370 has gone missing and Main Stream Media has totally avoided asking the hard questions. With the assistance of Before It's News Reporter 'Stompk' we break down the Seven Questions that MSM have avoided... (Editors Note: The script begins scrawling at 4:31 if you would like to fast forward past the introduction.) Having compassion leads to increased happiness, freedom from gender stereotypes, and better relationships with others.

Indy Media, Films for Action. "Once upon an illusion called time, we forgot what we came here to remember. 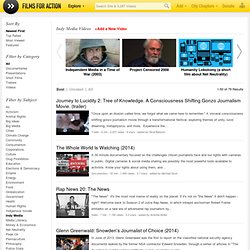 " Big Media, Films for Action. BEWARE OF IMAGES is a feature-length, animated documentary about the history of visual representation. 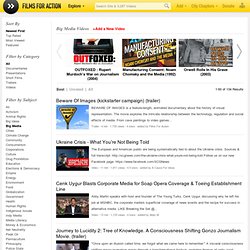 The movie explores the intricate relationship between the technology, regulation and social effects of media. From cave paintings to video games... The European and American public are being systematically lied to about the Ukraine crisis. Sources & full transcript: Follow us on our new Facebook page:

The Millennial Media Revolution: How The Next Generation is Re-Shaping The Press – Censored Notebook, Featured Articles. By Nolan Higdon [This is the first article in a four part series addressing how the flow of information has changed for the Millennial Generation (referring to people born between the early 1980s and 2000s). 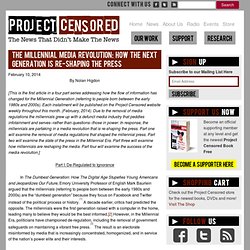 Each installment will be published on the Project Censored website weekly throughout this month. (February, 2014). Due to the removal of media regulations the millennials grew up with a defunct media industry that peddles infotainment and serves--rather than questions--those in power. In response, the millennials are partaking in a media revolution that is re-shaping the press. Part I: De-Regulated to Ignorance Recent data suggests Millennial Era voters are widely uninformed and misinformed about political happenings. Voters Say Election Full of Misleading and False Information. Voters Say Election Full of Misleading and False Information December 9, 2010 Poll Also Finds Voters Were Misinformed on Key Issues Full report(PDF)Questionnaire with Findings, Methodology (PDF) Following the first election since the Supreme Court has struck down limits on election-related advertising, a new poll finds that 9 in 10 voters said that in the 2010 election they encountered information they believed was misleading or false, with 56% saying this occurred frequently. 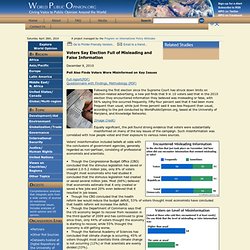 Fifty-four percent said that it had been more frequent than usual, while just three percent said it was less frequent than usual, according to the poll conducted by WorldPublicOpinion.org, based at the University of Maryland, and Knowledge Networks. (Image Credit) Pew Reasearch, State of the News 2013. In 2012, a continued erosion of news reporting resources converged with growing opportunities for those in politics, government agencies, companies and others to take their messages directly to the public. 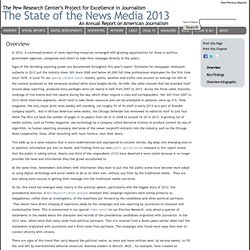 Signs of the shrinking reporting power are documented throughout this year’s report. Estimates for newspaper newsroom cutbacks in 2012 put the industry down 30% since 2000 and below 40,000 full-time professional employees for the first time since 1978. In local TV, our special content report reveals, sports, weather and traffic now account on average for 40% of the content produced on the newscasts studied while story lengths shrink. On CNN, the cable channel that has branded itself around deep reporting, produced story packages were cut nearly in half from 2007 to 2012.

This adds up to a news industry that is more undermanned and unprepared to uncover stories, dig deep into emerging ones or to question information put into its hands. What the Media Could be Doing More & More Of. Media bias. Freedom Of Press Worsening In The US: Report. It is estimated that just six companies own 90 percent of the U.S. media. 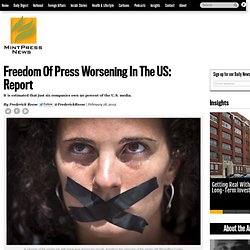 Censorship. Gmo917 : Sadly, it does not appear that... Propaganda. Orwell. Press Freedom. Intelligence Gathering and the Threat It Poses to Free Press. (Image: Surian Soosay / Flickr) The latest Snowden revelations - including Julian Assange figuring on a manhunting timeline and a possible classification of WikiLeaks as a malicious foreign actor - clearly demonstrate the National Security State's conflation of journalism and whistleblowing with terrorism.