This 'pearl' includes references noted in the Bias Busters learning module on Gender Bias in Academia. Please bookmark it as new resources may be added as they become available - and are vetted - as 'spOtOn' sites. Find out more at

Ww2.kqed. Creating The Next Bechdel Test. The Bechdel-Wallace Test — more commonly abbreviated to the Bechdel Test — asks two simple questions of a movie: Does it have at least two named female characters? 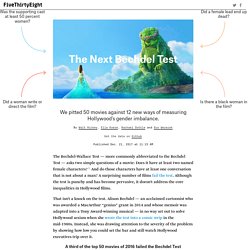 And do those characters have at least one conversation that is not about a man? A surprising number of films fail the test. Although the test is punchy and has become pervasive, it doesn’t address the core inequalities in Hollywood films. Bias thwarts innovation. My recent blog post on our future is networked and feminine has had more online attention than any other post I have written in the past two years. 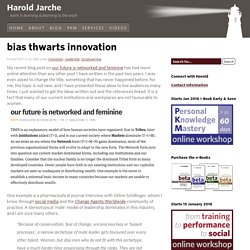 I was even asked to change the title, something that has never happened before. For me, the topic is not new, and I have presented these ideas to live audiences many times. Vernā Myers: How to overcome our biases? Walk boldly toward them. A guy wrote an honest letter to all the women in his engineering class. A letter from Jared Mauldin, a senior at Eastern Washington University in Cheney, Washington, begins with the assertion that the women in his engineering classes are not his equals. 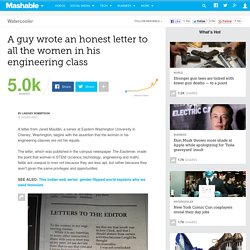 The letter, which was published in the campus newspaper The Easterner, made the point that women in STEM (science, technology, engineering and math) fields are unequal to men not because they are less apt, but rather because they aren't given the same privileges and opportunities. "I did not, for example, grow up in the world that discouraged me from focusing on hard science," Mauldin wrote. "Nor did I live in a society that told me not to get dirty, or said I was bossy for exhibiting leadership skills. " Meet 12 Badass Scientists…Who Also Happen to be Women — TED Fellows. 1. 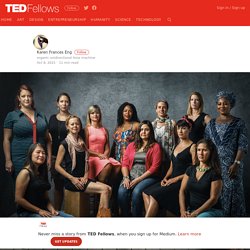 How advancing women’s equality can add $12 trillion to global growth. Gender inequality is not only a pressing moral and social issue but also a critical economic challenge. 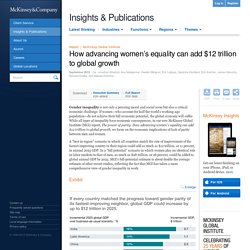 If women—who account for half the world’s working-age population—do not achieve their full economic potential, the global economy will suffer. While all types of inequality have economic consequences, in our new McKinsey Global Institute (MGI) report, The power of parity: How advancing women’s equality can add $12 trillion to global growth, we focus on the economic implications of lack of parity between men and women. A “best in region” scenario in which all countries match the rate of improvement of the fastest-improving country in their region could add as much as $12 trillion, or 11 percent, in annual 2025 GDP. In a “full potential” scenario in which women play an identical role in labor markets to that of men, as much as $28 trillion, or 26 percent, could be added to global annual GDP by 2025. Education Week. Focus on Success (Canadian International Development Agency) United Nations: Women and Gender Issues Press. Gender in the biological sciences.

Body, bias, and behavior: A comparative analysis of reasoning in two areas of biological science. Why Women Still Can’t Have It All - Anne-Marie Slaughter. The culture of “time macho”—a relentless competition to work harder, stay later, pull more all-nighters, travel around the world and bill the extra hours that the international date line affords you—remains astonishingly prevalent among professionals today. 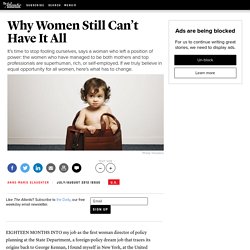 Nothing captures the belief that more time equals more value better than the cult of billable hours afflicting large law firms across the country and providing exactly the wrong incentives for employees who hope to integrate work and family. Yet even in industries that don’t explicitly reward sheer quantity of hours spent on the job, the pressure to arrive early, stay late, and be available, always, for in-person meetings at 11 a.m. on Saturdays can be intense. Indeed, by some measures, the problem has gotten worse over time: a study by the Center for American Progress reports that nationwide, the share of all professionals—women and men—working more than 50 hours a week has increased since the late 1970s. Revaluing Family Values. Inspiring The Next Generation Of Female Engineers. A special, mentoring relationship from one of my own female teachers from when I was young helped me recognize the positive influence that strong role models can have on young women. 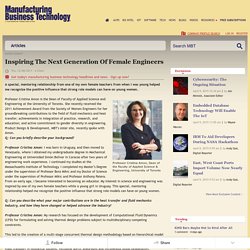 Professor Cristina Amon is the Dean of Faculty of Applied Science and Engineering at the University of Toronto. She recently received the 2011 Achievement Award from the Society of Women Engineers for her groundbreaking contributions to the field of fluid mechanics and heat transfer; achievements in integration of practice, research, and education; and active commitment to gender diversity in engineering. Want more women in tech? Get more women leaders in tech.

Want to master the CMO role? 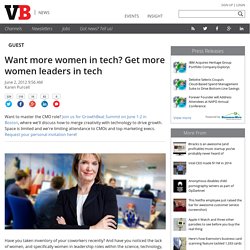 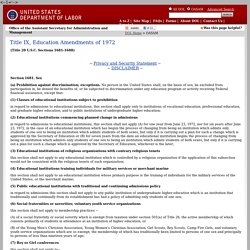 Gender Equity Planning - Best Practices. Gender Bias in Teaching. A common response from teachers when asked about gender inequity in classrooms is that they treat all their students the same. 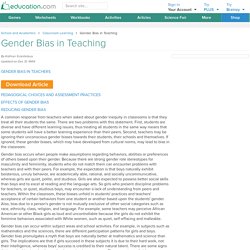 There are two problems with this statement. First, students are diverse and have different learning issues, thus treating all students in the same way means that some students will have a better learning experience than their peers. Second, teachers may be ignoring their unconscious gender biases towards their students, their schools and themselves. If ignored, these gender biases, which may have developed from cultural norms, may lead to bias in the classroom. Micromessaging to Reach and Teach Every Student. Click on image to download PDF version of Micromessaging information sheet. Ellen Pao and the Sexism You Can’t Quite Prove. It happens all the time when my husband and I are at work events together. Cocktail Party Guy asks my husband about how things are going at his news site, and he answers.

Then Cocktail Party Guy asks me how our dogs are, and I answer, before pivoting the conversation back to work — and later rolling my eyes as we walk away. It is not impolite. It is not inappropriate. Media Images of Women and Influence on Women's Lives. Gender Bias without Borders. Swedish cinemas take aim at gender bias with Bechdel test rating. You expect movie ratings to tell you whether a film contains nudity, sex, profanity or violence. Now cinemas in Sweden are introducing a new rating to highlight gender bias, or rather the absence of it. To get an A rating, a movie must pass the so-called Bechdel test, which means it must have at least two named female characters who talk to each other about something other than a man. The Athena Doctrine. Gender Bias in Academia: Findings from Focus Groups. Looking Through Shattered Glass: The Career Trajectories Of Carly Fiorina And Indra Nooyi.

Beyond the Maternal Wall: Relief for Family Caregivers Who Are Discriminated Against on the Job. The Maternal Wall. Reprint: F0410H Working women are well respected at the office—until they have children, finds law professor Joan C. Williams. While some women stand nose pressed against the glass ceiling, many working mothers never get near it. Gender Bias Learning Project. Center for WorkLife Law (UC Hastings) The Gender Revolution has Stalled Women’s workforce participation leveled off in the 1990s, as did men’s household contributions. Only 4% of Fortune 500 CEOs are women and the face of American poverty is still a mother. WorkLife Law seeks to jumpstart the stalled gender revolution by focusing, at any given time, on a few initiatives that hold the promise of producing concrete social or institutional change within a three- to-five year time frame. WorkLife Law develops new intellectual frameworks. New legal theories. The Finkbeiner Test - DoubleXScience.

What matters in stories about women scientists? “Free as in sexist?” Free culture and the gender gap. Focus on Research: Complexity and Gender. Good for Business: MAKING FULL USE OF THE NATION’S HUMAN CAPITAL. The Representation Project. The Mask You Live In - Trailer. New Superhero T-Shirts Latest in a Long Line of Sexist Licensed Products from DC AND Marvel. I’m not entirely sure who is making the decisions when it comes to licensing at DC Entertainment, but recently two somewhat controversial shirts have appeared at retail outlets, and it’s safe to say most people aren’t very happy with them. Wonder Woman and Superman get new costumes in the comics. This year, both major comic houses summer events are going to reboot their continuities.

WOMEN IN AGRICULTURE Closing the gender gap for development. Yvonne Brill and the Beef-Stroganoff Illusion. Brenda Milner: A scientific pioneer and a reluctant role model. Lisa Randall: Warped view of the universe. Two years after her climbing accident, Lisa Randall shakes her head, still not quite able to accept the reality of the laws of physics. Vera Rubin: The Bright Face Behind the Dark Sides of Galaxies. The “Knowledge Base” of Self: Uncovering Hidden Biases and Unpacking Privilege. Virginia slims ad. The woman used in this ad is young, sweet and pretty, matching the description below and visually appealing to women.

How Sexist Is Your Favorite Video Game? Women: The Leaders of Tomorrow. How the Media Failed Women in 2013. Williams fourpatterns. Women comprise over 50% of the U.S. population and... Women and leadership in universities: a case study of women academic managers. Author(s): Science faculty’s subtle gender biases favor male students. The Mask You Live In. Promoting Girls' Awareness and Interest in Engineering. Gender Bias Learning Project. vTapestry.