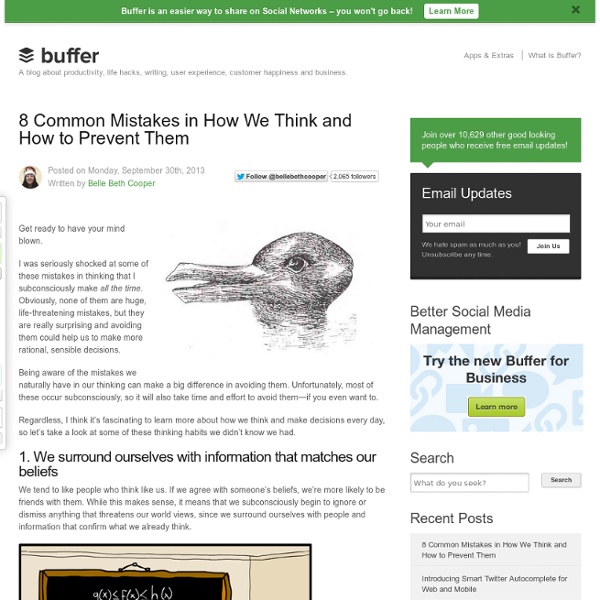 12.3K Flares Filament.io 12.3K Flares × Get ready to have your mind blown. I was seriously shocked at some of these mistakes in thinking that I subconsciously make all the time. Obviously, none of them are huge, life-threatening mistakes, but they are really surprising and avoiding them could help us to make more rational, sensible decisions. Especially as we thrive for continues self-improvement at Buffer, if we look at our values, being aware of the mistakes we naturally have in our thinking can make a big difference in avoiding them. Unfortunately, most of these occur subconsciously, so it will also take time and effort to avoid them—if you even want to. Regardless, I think it’s fascinating to learn more about how we think and make decisions every day, so let’s take a look at some of these thinking habits we didn’t know we had. 1. We tend to like people who think like us. This is called confirmation bias. Confirmation bias is a more active form of the same experience. 2. 3. 4. Well, no. Related:  Brain,Mind,Psychology

5 Strategies For Creating A Genius Mindset In Students How Can We Help Every Student Tap Their Inner Genius? by Zacc Dukowitz, Learnbop.com When we hear the word genius, certain people come immediately to mind—Albert Einstein in mathematics, or Warren Buffett in investing—but what exactly sets these people apart? It’s easy to simply shrug and say to ourselves, “Those people are just different. They have something most people don’t, and it’s as simple as that.” But the steps taken to arrive at a place of genius are actually more concrete, and have less to do with innate talent, than you might think. When it comes to cultivating intelligence, mindset is a huge factor. What is “Mindset”? Mindset refers to the beliefs you have about yourself and your basic qualities. Crucial opportunities for the application of good mindset habits occur in the classroom every day. And students who are—well, they may in fact be better positioned to become the next Einstein. The Characteristics of Genius Shifting Mindset 1) Change your Own Mindset 2) Change the Emphasis

5 Things That Believers Can Do, But Atheists Can’t Atheists actually miss out on a lot of activities that religious believers can participate in. Let’s go through the list, and see what you think. 1. Child Molestation If you read the news at all, you will have seen country after country finally recognize that many Catholic priests abused, molested and in some cases raped children. Fundamentalist groups often follow strict observance of physical punishment for children. Jews and Muslims also ritually mutilate their sons’ bodies through the practice of circumcision. 2. It goes by the ritual name of being kosher or halal. I have read many apologist arguments that this is somehow not a cruel practice and that the animal dies very quickly. 3. Don’t you just love all the faith healers out there? 4. Isn’t it wonderful how believers can justify a position they have on the basis that they are being guided by their faith? How about evolution? 5. Manifest Destiny The American concept of “manifest destiny” falls somewhat into this category too.

How Technology Is Changing Our Brains A while back, Bill Keller of The New York Times stirred up a hornet’s nest when he wrote a column worrying that joining Facebook would have a debilitating effect on his 13 year-old daughter’s intellectual faculties. Technology advocates, including me, pounced. Now there are new studies out that seem to support his argument. One shows that using search engines decreases our memory and another suggests that GPS may atrophy our brains. Discovery magazine has collected a half-dozen similar examples on its site. I think the question itself is misplaced. What Makes An Expert? We come into the world not knowing much. We learn virtually everything that way, by combining low order patterns to form higher order ones. Experts define themselves by learning the highest order patterns through what Anders Ericsson, calls deliberate practice. In much the same way, surgeons spend years learning the patterns of the human body and experienced firemen become familiar with the patterns of burning buildings.

Everything You've Been Told About How to Eat Is Wrong Photo Credit: Shutterstock.com/ Uros Zunic October 2, 2013 | Like this article? Join our email list: Stay up to date with the latest headlines via email. If you go to the National Institute of Health’s website today, you will find a section on a “ Healthy Eating Plan.” Nothing has changed over the past 36 years, except for this: everyone is fatter. The U.S. government began issuing dietary guidelines in 1977, when the Senate Select Committee on Nutrition and Human Needs, led by Senator George McGovern, issued the first dietary recommendations for the American people. According to the Centers for Disease Control, obesity has more than doubled among adults since these dietary recommendations were put in place in the 1970s, and as of 2010, more than one-third of Americans were obese. Perhaps you’ve witnessed someone struggle with a diet, or struggled yourself. But there’s another explanation, one that’s gaining traction across the scientific community. But there were issues from the start.

Study explains how the brain remembers pleasure and its implications for addiction | Kaleidoscope - UAB Campus News Key details of the way nerve cells in the brain remember pleasure are revealed in a study by UAB researchers published today in the journal Nature Neuroscience. Furthermore, the molecular events that form such “reward memories” appear to differ from those created by drug addiction, despite the popular theory that addiction hijacks normal reward pathways. Brain circuits have evolved to encourage behaviors proven to help our species survive by attaching pleasure to them. Eating rich food tastes good because it delivers energy and sex is desirable because it creates offspring. The same systems also connect in our minds environmental cues with actual pleasures to form reward memories. This study in rats supports the idea that the mammalian brain features several memory types, each using different circuits, with memories accessed and integrated as needed. Methylation is the attachment of a methyl group (one carbon and three hydrogens) to a DNA chain at certain spots (cytosine bases).

How a 'mistake' in a single-cell organism is actually a rewrite essential to life A tiny but unexpected change to a segment of RNA in a single-cell organism looks a lot like a mistake, but is instead a change to the genetic information that is essential to the organism's survival. Scientists have discovered this RNA "edit" in Trypanosoma brucei, a parasite that causes sleeping sickness in Africa and Chagas disease in Latin America. Though the organism is a model system for this work, the finding could lead to a new drug target to fight the parasite if higher species don't share this genetic behavior. Some of the organism's genetic activity was already known. In the case of gene products called tRNAs, which help assemble the amino acids that make proteins, T. brucei was known to have only one tRNA with a specific segment of RNA that ensures the tRNA's proper function. Additionally, examples of RNA editing have been discovered before. "These are changes for which no chemistry is known and has never been described. The finding was not only unexpected, but serendipitous.

Decision Making Is A Science 1.5K Flares Filament.io 1.5K Flares × Making decisions is something we do every day, so I wanted to find out more about how this process works and what affects the choices we make. It turns out, there are some really interesting ways our decisions are affected that I never would have guessed. What happens in your brain when you make decisions Obviously lots of things take place inside your brain as you make a decision. Why we accept the default choice Dan Ariely’s excellent TED talk explains this concept really well with the example of organ donor options on driver’s license forms: The overwhelming majority of drivers in the UK and European countries didn’t not check the box on their driver’s license application form. The funny thing is, in some countries, the box was an opt-in option, so people had to check the box to become an organ donor. If you watch the video all the way through, there are lots more examples of how this works in our brains. Why we make worse decisions over time 1. 2.

What History Will Say About Obamacare and the Government Shutdown If the Internet had a god, a creator, a primogenitor, it would be a 3D animated dancing baby riding a one-eyed, winged toaster reciting Monty Python sketches. As that primordial stew receded and the eldritch horror of the old gods faded away, Matt and Mike Chapman, along with their website HomestarRunner.com, emerged as the Internet’s Cain and Abel. Debuting at a time when Napster was still the king of piracy, HomestarRunner.com was a Flash animation site that realized much of the web’s multimedia potential. The site updated frequently with new cartoons, soundboards full of character’s catchphrases, and obscure homages. On April 1st, 2014, as the aging homepage wallpaper peeled away revealing the html beneath, HomestarRunner.com updated for the first time in almost four years. At the end of the animation, users were offered free downloads of Windows 98 theme packs, one designed by Strong Bad and the other by Homestar Runner. Perhaps most importantly, the Brothers Chaps knew computers.