FBI to unlock the iPhone

The government wants your fingerprint to unlock your phone. Should that be allowed? As the world watched the FBI spar with Apple this winter in an attempt to hack into a San Bernardino shooter's iPhone, federal officials were quietly waging a different encryption battle in a Los Angeles courtroom. 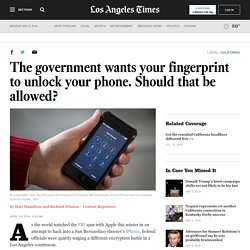 There, authorities obtained a search warrant compelling the girlfriend of an alleged Armenian gang member to press her finger against an iPhone that had been seized from a Glendale home. The phone contained Apple's fingerprint identification system for unlocking, and prosecutors wanted access to the data inside it. It marked a rare time that prosecutors have demanded a person provide a fingerprint to open a computer, but experts expect such cases to become more common as cracking digital security becomes a larger part of law enforcement work. The Glendale case and others like it are forcing courts to address a basic question: How far can the government go to obtain biometric markers such as fingerprints and hair?

The U.S. Other court documents in the case were filed under seal. F.B.I. Lawyer Won’t Say if Data From Unlocked iPhone Is Useful. WASHINGTON — The epic fight between the and over a locked iPhone is now over, but a central question in the case has remained unanswered: What secrets did the phone, used by one of the attackers in the San Bernardino, Calif., rampage, actually hold? 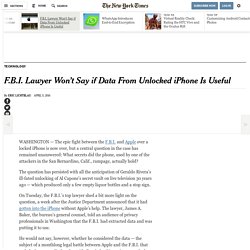 The question has persisted with all the anticipation of Geraldo Rivera’s ill-fated unlocking of Al Capone’s secret vault on live television 30 years ago — which produced only a few empty liquor bottles and a stop sign. On Tuesday, the F.B.I.’s top lawyer shed a bit more light on the question, a week after the Justice Department announced that it had gotten into the iPhone without Apple’s help. The lawyer, James A. Baker, the bureau’s general counsel, told an audience of privacy professionals in Washington that the F.B.I. had extracted data and was putting it to use.

“We’re still working on that, I guess is the answer,” he said. Mr. “If and when it becomes appropriate to disclose it, we will,” he said. Mr. Mr. Apple, the FBI and the Future. The epic showdown between the FBI and Apple has ended with a fizzle for now. 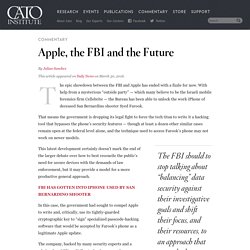 With help from a mysterious “outside party” — which many believe to be the Israeli mobile forensics firm Cellebrite — the Bureau has been able to unlock the work iPhone of deceased San Bernardino shooter Syed Farook. That means the government is dropping its legal fight to force the tech titan to write it a hacking tool that bypasses the phone’s security features — though at least a dozen other similar cases remain open at the federal level alone, and the technique used to access Farook’s phone may not work on newer models. The FBI should to stop talking about “balancing” data security against their investigative goals and shift their focus, and their resources, to an approach that serves both at once. The company, backed by many security experts and a who’s-who of Silicon Valley technology powerhouses, warned that such a move would set a dangerous precedent. Forbes Welcome. How a N.Y. judge inspired Apple’s encryption fight with Justice. Last October, prosecutors from the Justice Department asked a federal magistrate judge in Brooklyn to issue an order directing Apple to help the Drug Enforcement Administration bust security on an iPhone 5 seized from the home of Jun Feng, a suspected meth dealer. 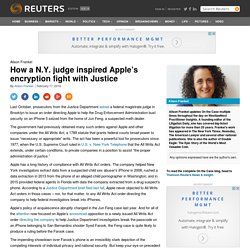 The government had previously obtained many such orders against Apple and other companies under the All Writs Act, a 1789 statute that grants federal courts broad power to issue “necessary or appropriate” writs. The act has been a powerful tool for prosecutors since 1977, when the U.S. Supreme Court ruled in U.S. v. New York Telephone that the All Writs Act extends, under certain conditions, to private companies in a position to assist “the proper administration of justice.” Apple has a long history of compliance with All Writs Act orders. Apple’s policy of acquiescence abruptly changed in the Jun Feng case last year. Slashdot. Russell Brandom reports for The Verge: Apple's San Bernardino fight may be over, but the government is still seeking both Apple and Google's help in unlocking phones. 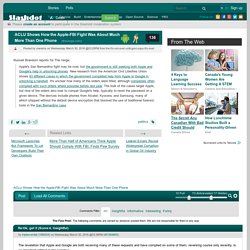 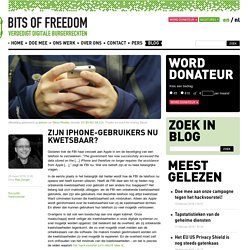 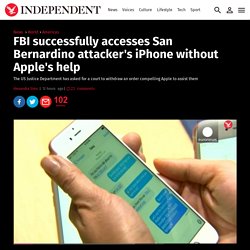 Following the breakthrough the US Justice Department asked a court to withdraw an order compelling Apple to assist them, according to a court filing on Monday. Until last week, the government insisted it had no way to access the phone used by one of the shooters, Syed Rizwan Farook, saying it would need to force Apple to write new software to be able to disable the phone's password protection. Apple fought an order obtained by the FBI last month, requiring the company to write new software, sparking an increasingly contentious debate surrounding digital privacy rights and national security interests. Farook and his wife, Tashfeen Malik, shot 14 people dead in a massacre in San Bernardino, California after opening fire at a conference centre on 2 December where Farook's firm were holding a party.

In pictures: San Bernardino shooting. FBI cracks seized iPhone, stands down in legal battle with Apple. According to a new court filing, government prosecutors have formally asked a federal judge to cancel her prior order that would have compelled Apple to assist efforts to unlock a seized iPhone linked to the San Bernardino attacks in late 2015. 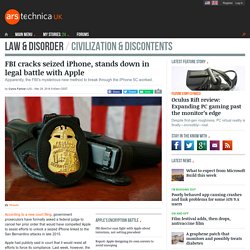 Apple had publicly said in court that it would resist all efforts to force its compliance. Last week, however, the hearing between prosecutors and Apple was postponed less than 24 hours before it was set to take place, because the Department of Justice said it was evaluating a new method to access the phone's data.

"The government has now successfully accessed the data stored on [terrorist Syed Rizwan] Farook’s iPhone and therefore no longer requires the assistance from Apple Inc. ," prosecutors wrote in the Monday filing, which does not explain precisely what was done. The government has also not explained what, if any data was recovered. Apple did not immediately respond to Ars' request for comment. This post originated on Ars Technica. U.S. Says It Has Unlocked iPhone Without Apple. US drops Apple case after cracking San Bernardino killer’s iPhone. 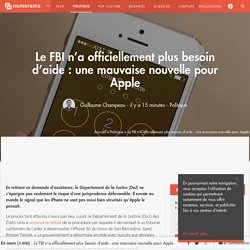 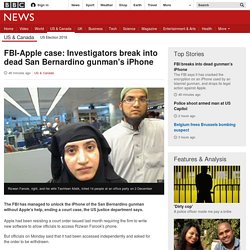 Apple had been resisting a court order issued last month requiring the firm to write new software to allow officials to access Rizwan Farook's phone. But officials on Monday said that it had been accessed independently and asked for the order to be withdrawn. Rizwan Farook and his wife killed 14 people in San Bernardino in December. They were later shot dead by police. The FBI got into the San Bernardino iPhone without Apple’s help, but the war over encryption isn’t over. The tense legal stand-off between Apple and the FBI over the encrypted iPhone of San Bernardino shooter Syed Farook is over. The government announced in a court filing Monday that it managed to get into the phone without Apple’s help. In a statement, the Department of Justice announced that it was able to unlock the iPhone “with the recent assistance of a third party.” That third party is reportedly Cellebrite, an Israel-based forensics firm that regularly assists law enforcement in getting evidence off digital devices.

Government keeping its method to crack San Bernardino iPhone 'classified' A new method to crack open locked iPhones is so promising that US government officials have classified it, the Guardian has learned. The Justice Department made headlines on Monday when it postponed a federal court hearing in California.

It had been due to confront Apple over an order that would have forced it to write software that would make it easier for investigators to guess the passcode for an iPhone used by San Bernardino gunman Syed Farook. The government now says it may have figured out a way to get into the phone without Apple’s help. But it wants that discovery to remain secret, in an effort to prevent criminals, security researchers and even Apple itself from reengineering smartphones so that the tactic would no longer work.