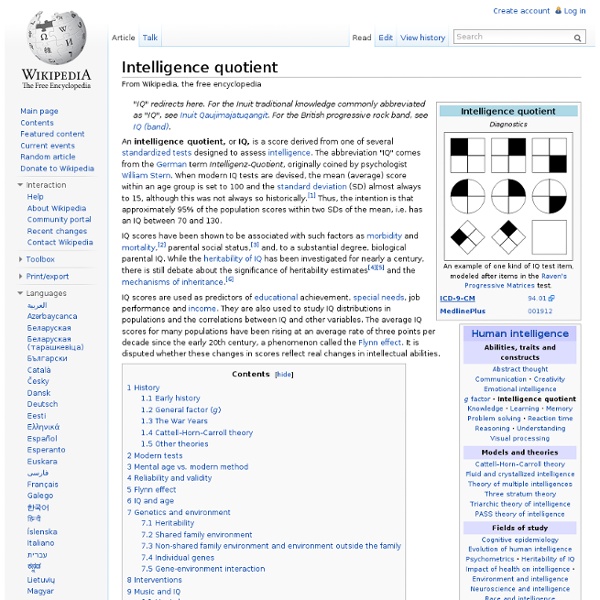 IQ scores have been shown to be associated with such factors as morbidity and mortality,[2][3] parental social status,[4] and, to a substantial degree, biological parental IQ. While the heritability of IQ has been investigated for nearly a century, there is still debate about the significance of heritability estimates[5][6] and the mechanisms of inheritance.[7] History[edit] Early history[edit] The English statistician Francis Galton made the first attempt at creating a standardised test for rating a person's intelligence. French psychologist Alfred Binet, together with Victor Henri and Théodore Simon had more success in 1905, when they published the Binet-Simon test in 1905, which focused on verbal abilities. The score on the Binet-Simon scale would reveal the child's mental age. General factor (g)[edit] The many different kinds of IQ tests use a wide variety of methods. An illustration of Spearman's two-factor intelligence theory. The War Years in the United States[edit] L.L. John B. Related:  Intelligence Forms • Superdotació i altes capacitats

g factor (psychometrics) The g factor (short for "general factor") is a construct developed in psychometric investigations of cognitive abilities. It is a variable that summarizes positive correlations among different cognitive tasks, reflecting the fact that an individual's performance at one type of cognitive task tends to be comparable to his or her performance at other kinds of cognitive tasks. The g factor typically accounts for 40 to 50 percent of the between-individual variance in IQ test performance, and IQ scores are frequently regarded as estimates of individuals' standing on the g factor.[1] The terms IQ, general intelligence, general cognitive ability, general mental ability, or simply intelligence are often used interchangeably to refer to the common core shared by cognitive tests.[2] The existence of the g factor was originally proposed by the English psychologist Charles Spearman in the early years of the 20th century. Mental tests may be designed to measure different aspects of cognition.

Triarchic theory of intelligence Different components of information processing[edit] Schematic illustrating one trial of each stimulus pool in the Sternberg task: letter, word, object, spatial, grating. Sternberg associated the workings of the mind with a series of components. The metacomponents are executive processes used in problem solving and decision making that involve the majority of managing our mind. Sternberg’s next set of components, performance components, are the processes that actually carry out the actions the metacomponents dictate. The last set of components, knowledge-acquisition components, are used in obtaining new information. Whereas Sternberg explains that the basic information processing components underlying the three parts of his triarchic theory are the same, different contexts and different tasks require different kind of intelligence (Sternberg, 2001). Componential / Analytical Subtheory[edit] Sternberg associated the componential subtheory with analytical giftedness. Challenges[edit]

Intellectual giftedness Intellectual giftedness is an intellectual ability significantly higher than average. It is a characteristic of children, variously defined, that motivates differences in school programming. It is thought to persist as a trait into adult life, with various consequences studied in longitudinal studies of giftedness over the last century. There is no generally agreed definition of giftedness for either children or adults, but most school placement decisions and most longitudinal studies over the course of individual lives have been based on IQ in the top 2 percent of the population, that is above IQ 130. The various definitions of intellectual giftedness include either general high ability or specific abilities. For example, by some definitions an intellectually gifted person may have a striking talent for mathematics without equally strong language skills. Identifying giftedness[edit] Overview[edit] Definitions of giftedness[edit] In Identifying Gifted Children: A Practical Guide, Susan K.

Latent inhibition Theories[edit] The LI effect has received a number of theoretical interpretations. One class of theory holds that inconsequential stimulus pre-exposure results in reduced associability for that stimulus. The loss of associability has been attributed to a variety of mechanisms that reduce attention, which then must be reacquired in order for learning to proceed normally.[2] Alternatively, it has been proposed that LI is a result of retrieval failure rather than acquisition failure.[3] Such a position advocates that, following stimulus pre-exposure, the acquisition of the new association to the old stimulus proceeds normally. Variation[edit] LI is affected by many factors, one of the most important of which is context. Physiology[edit] The assumption that the attentional process that produces LI in normal subjects is dysfunctional in schizophrenia patients has stimulated considerable research, with humans, as well as with rats and mice. Pathology[edit] Low latent inhibition[edit] Notes[edit]

Savant syndrome Savant syndrome is a condition in which a person with a mental disability, such as an autism spectrum disorder, demonstrates profound and prodigious capacities or abilities far in excess of what would be considered normal.[1][2][3] People with savant syndrome may have neurodevelopmental disorders, notably autism spectrum disorders, or brain injuries. The most dramatic examples of savant syndrome occur in individuals who score very low on IQ tests, but not always. In some very rare and extreme cases, some people with savant actually had an average to even a higher IQ while demonstrating exceptional skills or brilliance in specific areas, such as rapid calculation, art, memory, or musical ability.[4][5][6][7] In spite of the name "syndrome", it is not recognized as a mental disorder nor as part of mental disorder in medical manuals such as the ICD-10[8] or the DSM-V.[9] Characteristics[edit] Mechanism[edit] Savant syndrome is poorly understood. Epidemiology[edit] History[edit] See also[edit]

Multi-agent system Simple reflex agent Learning agent Concept[edit] Multi-agent systems consist of agents and their environment. Agents can be divided into different types: Very simple like: passive agents[6] or agent without goals (like obstacle, apple or key in any simple simulation)Active agents[6] with simple goals (like birds in flocking, or wolf–sheep in prey-predator model)Or very complex agents (like cognitive agent, which contain complex calculations) Environment also can be divided into: Virtual EnvironmentDiscrete EnvironmentContinuous Environment Characteristics[edit] The agents in a multi-agent system have several important characteristics:[10] Autonomy: the agents are at least partially independent, self-aware, autonomousLocal views: no agent has a full global view of the system, or the system is too complex for an agent to make practical use of such knowledgeDecentralization: there is no designated controlling agent (or the system is effectively reduced to a monolithic system)[11] Properties[edit]