Collective Impact - Stanford Social Innovation Review. (Photo by iStock/wildpixel) The scale and complexity of the US public education system has thwarted attempted reforms for decades. 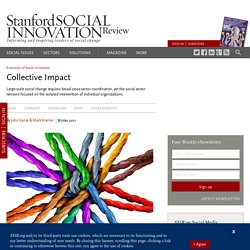 Major funders, such as the Annenberg Foundation, Ford Foundation, and Pew Charitable Trusts have abandoned many of their efforts in frustration after acknowledging their lack of progress. Once the global leader—after World War II the United States had the highest high school graduation rate in the world—the country now ranks 18th among the top 24 industrialized nations, with more than 1 million secondary school students dropping out every year. The heroic efforts of countless teachers, administrators, and nonprofits, together with billions of dollars in charitable contributions, may have led to important improvements in individual schools and classrooms, yet system-wide progress has seemed virtually unobtainable. 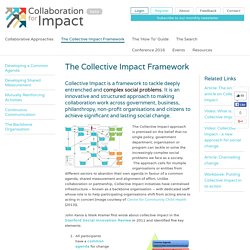 It is an innovative and structured approach to making collaboration work across government, business, philanthropy, non-profit organisations and citizens to achieve significant and lasting social change. The Collective Impact approach is premised on the belief that no single policy, government department, organisation or program can tackle or solve the increasingly complex social problems we face as a society. The approach calls for multiple organisations or entities from different sectors to abandon their own agenda in favour of a common agenda, shared measurement and alignment of effort. Unlike collaboration or partnership, Collective Impact initiatives have centralised infrastructure – known as a backbone organisation – with dedicated staff whose role is to help participating organisations shift from acting alone to acting in concert (image courtesy of Centre for Community Child Health (2013)).

White House Council for Community Solutions. The White House Office of the Press Secretary For Immediate Release December 14, 2010 By the authority vested in me as President by the Constitution and the laws of the United States of America, and in order to encourage the growth and maximize the impact of innovative community solutions and civic participation by all Americans, it is hereby ordered as follows: Section 1. 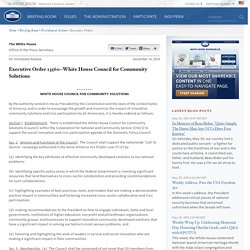 Sec. 2. (a) identifying the key attributes of effective community developed solutions to our national problems; (b) identifying specific policy areas in which the Federal Government is investing significant resources that lend themselves to cross-sector collaboration and providing recommendations for such collaborations; (c) highlighting examples of best practices, tools, and models that are making a demonstrable positive impact in communities and fostering increased cross-sector collaboration and civic participation; Sec. 3. Understanding the Value of Backbone Organizations in Collective Impact: Part 1. An in-depth review of what it takes to be a backbone organization, and how to evaluate and support its work. 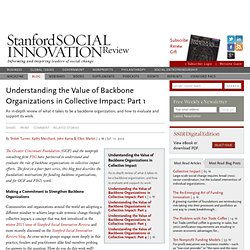 The Greater Cincinnati Foundation (GCF) and the nonprofit consulting firm FSG have partnered to understand and evaluate the role of backbone organizations in collective impact efforts. The first in a four-part series, this blog post describes the foundation’s motivations for funding backbone organizations, and for GCF and FSG’s work. Making a Commitment to Strengthen Backbone Organizations Communities and organizations around the world are adopting a different mindset to achieve large-scale systemic change through collective impact, a concept that was first introduced in the winter 2011 issue of Stanford Social Innovation Review and more recently discussed on the Stanford Social Innovation Review blog.

As cross-sector groups engage more deeply in this practice, funders and practitioners alike find ourselves probing for answers to the question: How do you do this work well? Developing a Common Agenda. Collective impact requires all participants to have a shared vision for change, one that includes a common understanding of the problem and a joint approach to solving it through agreed upon actions. 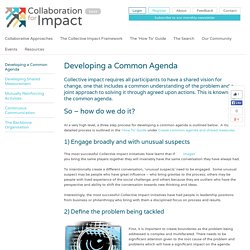 This is known as the common agenda. At a very high level, a three step process for developing a common agenda is outlined below. A more detailed process is outlined in the ‘How To’ Guide under Create common agenda and shared measures. 1) Engage broadly and with unusual suspects The most successful Collective Impact initiatives have learnt that if you bring the same players together they will invariably have the same conversation they have always had. To intentiionally create a different conversation, ‘unusual suspects’ need to be engaged.