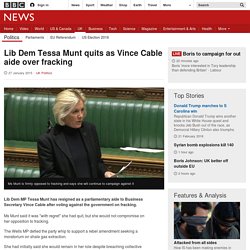 Ms Munt said it was "with regret" she had quit, but she would not compromise on her opposition to fracking. Collective responsibility is an awful idea – but Jeremy Corbyn will be in trouble without it. One of my favourite things about Jeremy Corbyn, beyond the beard (I do like beards) and the way he was photographed in the Times the other day unabashedly wearing sandals with socks (spunky; no quarter given) is his embrace of dissent as a virtue. 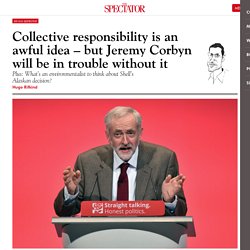 Which is a virtue born of necessity, obviously, on account of the way that there are only about six people in the Parliamentary Labour Party who don’t disagree with him on everything, and they’re not safe on telly, either. Still, though. I like it. The doctrine of collective ministerial responsibility — the notion that everybody in a government thinks the same thing, and if one of them should ever admit that they don’t, then they have to go — doesn’t attract nearly the ridicule that it ought. It is, literally, a code of lying. The big question, though, is how he’ll cope without it. Cabinet collective responsibility rules need review, says ex-Tory minister. One of David Cameron's former cabinet members has called for a fresh look at the rules of collective responsibility that she claims prevents ministers from speaking their minds, arguing it could help humanise politics. 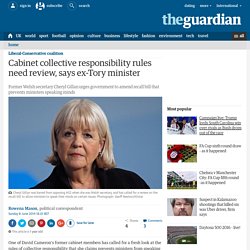 Cheryl Gillan, who was Welsh secretary under the coalition, urged the government to reconsider the rules as part of its new recall bill, which will allow voters to unseat errant MPs in the worst circumstances. Collective responsibility means all cabinet ministers – Tory and Lib Dem in the coalition – have to toe the party line and not diverge from the message of the government. Gillan acknowledged it was a "very difficult issue" as governments do need discipline, but she said voters would give ministers credit for speaking their minds and not "acting like sheep". Handout: Individual Ministerial Responsibility - Political Investigations. WHO? 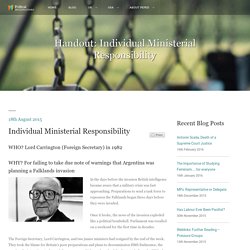 Lord Carrington (Foreign Secretary) in 1982 WHY? Ministerial Responsibility. Cabinet reshuffles. IMR. What is a resigning issue? Lord Carrington did it on the Falklands, Edwina Currie did it over eggs and now Beverley Hughes has quit over immigration checks. 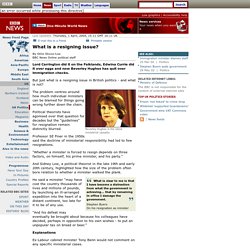 Tory MPs are disregarding our unwritten constitution. For a party whose members often pride themselves on being defenders of the UK’s unwritten constitution, it is surprising how Conservative MPs have recently shown little regard for conventions – some of which were considered so important as to be almost binding not that long ago. 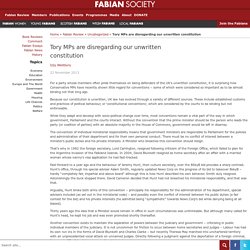 Because our constitution is unwritten, UK law has evolved through a variety of different sources. These include established customs and practices of political behaviour, or ‘constitutional conventions’, which are considered by the courts to be binding but not enforceable. While they adapt and develop with socio-political change over time, most conventions remain a vital part of the way in which government, Parliament and the courts interact. Without the convention that the prime minister should be the person who leads the party (or coalition of parties) with an absolute majority in the House of Commons, government would be left in disarray. Labour is by no means faultless. Mike Gordon: Ministerial Responsibility After Huhne. Does the Chris Huhne affair have constitutional implications? 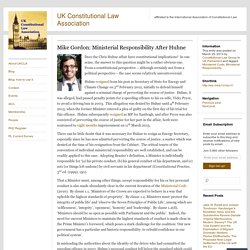 In one sense, the answer to this question might be a rather obvious one. From a constitutional perspective – although certainly not from a political perspective – the case seems relatively uncontroversial. Huhne resigned from his post as Secretary of State for Energy and Climate Change on 3rd February 2012, initially to defend himself against a criminal charge of perverting the course of justice. Huhne, it was alleged, had passed penalty points for a speeding offence to his ex-wife, Vicky Pryce, to avoid a driving ban in 2003.

This allegation was denied by Huhne until 4th February 2013, when the former Minister entered a plea of guilty on the first day of his trial for this offence. Revision Update: The Executive: collective and individual ministerial responsibility. The convention is needed to maintain a united public face in order to ensure confidence and public support is maintained for the government. 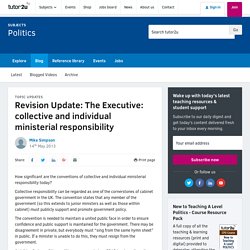 There may be disagreement in private, but everybody must “sing from the same hymn sheet” in public. If a minister is unable to do this, they must resign from the government. A striking feature of the coalition government since 2010 has been its unity. The coalition agreement set out a range of policies, which both parties have adhered to - the Liberal Democrats even reneged on their pre-election pledge not to raise tuition fees. Disagreements that have been evident have been relatively minor, for instance Vince Cable is rumoured to have been sceptical of certain austerity measures but has maintained support for Osborne’s policies, as was recently evidenced at the Lib Dem conference.

Ministers 'free to campaign for both sides on EU vote' Image copyright AFP/Getty. 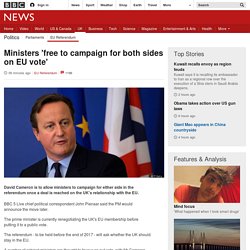 EU referendum: Cabinet ministers may quit over European Union vote, says Liam Fox - UK Politics - UK - The Independent. Liam Fox, the former Defence Secretary, set the timetable as he called on the Prime Minister to reveal more of his negotiating hand by the Conservative conference in just over three months. 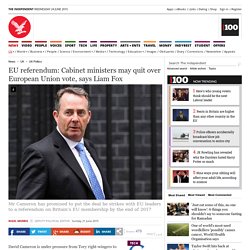 Around the same time, a £20m campaign will be launched to argue for Britain to leave the European Union. Mr Cameron will reach a crucial early stage in his discussions at an EU summit this week in Brussels. It follows a Tory rebellion last week over his plans for an EU membership referendum in which he was only saved from defeat by Labour abstentions.

Mr Fox said: “I think we’ll get a better idea of what the Prime Minister’s been discussing when we get some outcome from that summit. Loading gallery “Certainly, as we go into the autumn season into our Party Conference, I think it will be necessary to reveal a bit more of what we’re negotiating.” EU Referendum: Six Tory Cabinet ministers demand freedom to campaign for Brexit. "If everyone was told to support the 'In' campaign, they would have to resign. That would certainly not be ideal" Cabinet minister Mr Cameron has pledged to renegotiate Britain’s relationship with Brussels before holding a referendum before the end of 2017. He has said that if his renegotiation is successful, he will campaign for Britain to remain in Europe. Downing Street insists that no decision has yet been taken on whether collective responsibility will apply ahead of the referendum.

However, Mr Cameron has made clear that he expects all of his Cabinet members to back the renegotiation.