Shades of Black. Military culture is filled with symbols and insignia, a rich visual language that signifies everything from various unit and command affiliations to significant events and note-worthy programs. 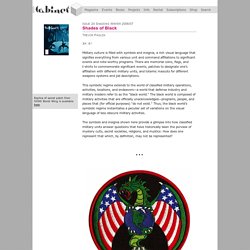 There are memorial coins, flags, and t-shirts to commemorate significant events, patches to designate one’s affiliation with different military units, and totemic mascots for different weapons systems and job descriptions. This symbolic regime extends to the world of classified military operations, activities, locations, and endeavors—a world that defense industry and military insiders refer to as the "black world.

" The black world is composed of military activities that are officially unacknowledged—programs, people, and places that (for official purposes) "do not exist. " Thus, the black world’s symbolic regime instantiates a peculiar set of variations on the visual language of less obscure military activities. "Special" almost invariably means "black" or highly classified. THE SHADOW GOVERNMENT. "If the American people knew what we have done, they would string us up from the lamp posts. 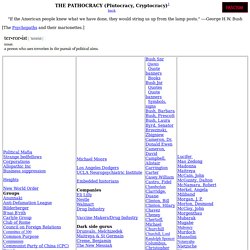 " ----George H.W. Bush If you take the view that the President of the United States is actually a pirate Captain then all of it's history fits into place, it's the destruction of the Health system, it's taking over other countries and stealing their assets and bombing the snot out of them and it is depopulating the planet, these guys are Pirate Captains, we should stop calling them Presidents and Prime Ministers. They are Pirate Captains of the British plantation which is controlled by Israel Greg Hallett Begins 11/12: Interview with Dr. James Fetzer, PhD - NATO drug runs from Afghanistan Hallett, Greg. LUCIFERIAN SYMBOLISM. LUCIFERIAN (SATANIC) SYMBOLISM Satanism Reptilians The Reign of Evil Lucifer 'Signs and symbols rule the world, not words nor laws.' ~ Confucius [These are the symbols used by the Reptilian proxy group, the Reptoids (Illuminati, & Freemasons), collectively are known as Satanists or Luciferians. 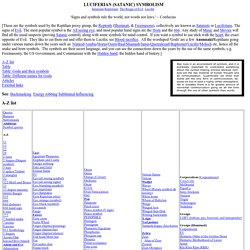 The signs of Evil. The most popular symbol is the All seeing eye, and most popular hand signs are the Horn and the 666. Any study of Music and Movies will find all the usual suspects (proving Satanic control), along with some symbols for mind control. A-Z listTable Table: Gods and their symbolsTable: Different names for GodsArticlesExternal links See: Backmasking Energy robbing Subliminal Influencing A-Z list Table [It is revealing that the Oroboros and Snake swallowing human, for example, were symbols of Quetzalcoatl (who was killing 250,000 every year by Human Sacrifices), and are still in use today. Gods and their symbols Snake swallowing tail Different names for Gods Articles Embedded Code Broken?

The Ralph Nader Library Site Map. Ralph Nader is the inspiration for, and not the creator of, this digital archive of public-benefit oriented media material. 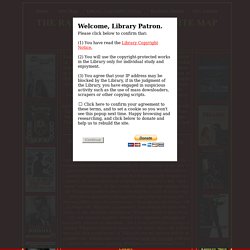 He was not consulted, asked for permission, or addressed as a source of guidance in the creation of this project, and for all we know, his publishing people don't like it. Though we would like it if they did, and sent us lots of archive material to share with the world. Because the story of Ralph's courageous and effective campaigns on behalf of public health, environmental safety, and consumer protection can stir the commitment of people at any stage in life. When we all pull together to change things, things change. That's Ralph's teaching, and this website is built to get it across. TOM the DANCING BUG PRESENTS: NEWS OF THE TIMES: LIBRARY SYSTEM TERRORIZES PUBLISHING INDUSTRY. Secret Patches from The Black OPPs world. The Dragon is in your Base Killing your Dudes You’re an imagery analyst, so naturally you see yourself as a Tolkein-esque flying serpent, dispensing destruction from the heavens. 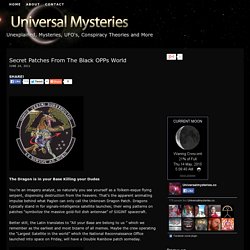 That’s the apparent animating impulse behind what Paglen can only call the Unknown Dragon Patch. Dragons typically stand in for signals-intelligence satellite launches; their wing patterns on patches “symbolize the massive gold-foil dish antennae” of SIGINT spacecraft. Better still, the Latin translates to “All your Base are belong to us ” which we remember as the earliest and most bizarre of all memes. Maybe the crew operating the “Largest Satellite in the world” which the National Reconnaissance Office launched into space on Friday, will have a Double Rainbow patch someday.

LUCIFERIAN SYMBOLISM. Vril. Vril, the Power of the Coming Race is an 1871 novel by Edward Bulwer-Lytton, originally printed as The Coming Race. 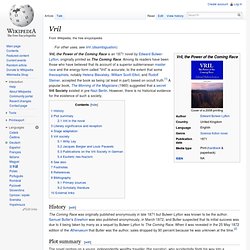 Among its readers have been those who have believed that its account of a superior subterranean master race and the energy-form called "Vril" is accurate, to the extent that some theosophists, notably Helena Blavatsky, William Scott-Elliot, and Rudolf Steiner, accepted the book as being (at least in part) based on occult truth.[1] A popular book, The Morning of the Magicians (1960) suggested that a secret Vril Society existed in pre-Nazi Berlin. However, there is no historical evidence for the existence of such a society.

History[edit] Plot summary[edit] The novel centres on a young, independently wealthy traveller (the narrator), who accidentally finds his way into a subterranean world occupied by beings who seem to resemble angels and call themselves Vril-ya. Vril in the novel[edit] Literary significance and reception[edit] Stage adaptation[edit] Vril society[edit] [edit]