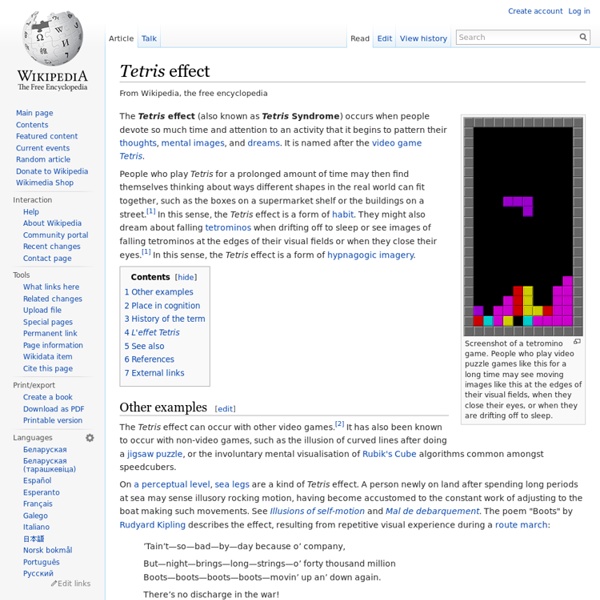 Screenshot of a tetromino game. People who play video puzzle games like this for a long time may see moving images like this at the edges of their visual fields, when they close their eyes, or when they are drifting off to sleep. The Tetris effect (also known as Tetris Syndrome) occurs when people devote so much time and attention to an activity that it begins to pattern their thoughts, mental images, and dreams. It is named after the video game Tetris. Other examples[edit] The Tetris effect can occur with other video games.[2] It has also been known to occur with non-video games, such as the illusion of curved lines after doing a jigsaw puzzle, or the involuntary mental visualisation of Rubik's Cube algorithms common amongst speedcubers. On a perceptual level, sea legs are a kind of Tetris effect. ’Tain’t—so—bad—by—day because o’ company,But—night—brings—long—strings—o’ forty thousand million Boots—boots—boots—boots—movin’ up an’ down again. Place in cognition[edit] L'effet Tetris[edit]

Can Playing the Computer Game “Tetris” Reduce the Build-Up of Flashbacks for Trauma? A Proposal from Cognitive Science 10 Brilliant Social Psychology Studies Ten of the most influential social psychology experiments. “I have been primarily interested in how and why ordinary people do unusual things, things that seem alien to their natures.Why do good people sometimes act evil?Why do smart people sometimes do dumb or irrational things?” Like eminent social psychologist Professor Philip Zimbardo (author of The Lucifer Effect: Understanding How Good People Turn Evil), I’m also obsessed with why we do dumb or irrational things. The answer quite often is because of other people – something social psychologists have comprehensively shown. Over the past few months I’ve been describing 10 of the most influential social psychology experiments. Each one tells a unique, insightful story relevant to all our lives, every day. 1. The ‘halo effect’ is a classic social psychology experiment. » Read on about the halo effect -» 2. » Read on about cognitive dissonance -» 3. » Read on about Sherif’s Robbers Cave experiment -» 4. 5. 6. 7. 8. 9. 10.

Why Intelligent People Use More Drugs The human consumption of psychoactive drugs , such as marijuana , cocaine , and heroin, is of even more recent historical origin than the human consumption of alcohol or tobacco, so the Hypothesis would predict that more intelligent people use more drugs more frequently than less intelligent individuals. The use of opium dates back to about 5,000 years ago, and the earliest reference to the pharmacological use of cannabis is in a book written in 2737 BC by the Chinese Emperor Shen Nung. Opium and cannabis are the only “natural” (agricultural) psychoactive drugs. Other psychoactive drugs are “chemical” (pharmacological); they require modern chemistry to manufacture, and are therefore of much more recent origin. Morphine was isolated from opium in 1806, cocaine was first manufactured in 1860, and heroin was discovered in 1874. The following graph shows a similar association between childhood intelligence and the latent factor for the consumption of psychoactive drugs among Americans.

Google Begins Testing Its Augmented-Reality Glasses Photos via GoogleGoogle showed off its first venture into wearable computing, called Project Glass. If you venture into a coffee shop in the coming months and see someone with a pair of futuristic glasses that look like a prop from “Star Trek,” don’t worry. It’s probably just a Google employee testing the company’s new augmented-reality glasses. On Wednesday, Google gave people a clearer picture of its secret initiative called Project Glass. The glasses are not yet for sale. In a post shared on Google Plus, employees in the company laboratory known as Google X, including Babak Parviz, Steve Lee and Sebastian Thrun, asked people for input about the prototype of Project Glass. “We’re sharing this information now because we want to start a conversation and learn from your valuable input,” the three employees wrote. The prototype version Google showed off on Wednesday looked like a very polished and well-designed pair of wrap-around glasses with a clear display that sits above the eye.

Self-sculpting sand Imagine that you have a big box of sand in which you bury a tiny model of a footstool. A few seconds later, you reach into the box and pull out a full-size footstool: The sand has assembled itself into a large-scale replica of the model. That may sound like a scene from a Harry Potter novel, but it’s the vision animating a research project at the Distributed Robotics Laboratory (DRL) at MIT’s Computer Science and Artificial Intelligence Laboratory. Unlike many other approaches to reconfigurable robots, smart sand uses a subtractive method, akin to stone carving, rather than an additive method, akin to snapping LEGO blocks together. Distributed intelligence Algorithmically, the main challenge in developing smart sand is that the individual grains would have very few computational resources. To attach to each other, to communicate and to share power, the cubes use 'electropermanent magnets,' materials whose magnetism can be switched on and off with jolts of electricity. Rapid prototyping

Study Finds Alcohol and Tobacco More Harmful than Marijuana, LSD, or Ecstasy (Revisited) : The Scientific Activist Back in August, I reported on an ACMD study buried in the back of a UK government report. The study gave strong evidence that the current drug classification scheme in the UK was fundamentally flawed and was not based on the actual danger of a given drug. The study has now been published in this week’s issue of The Lancet. Here’s what I originally wrote: (1 August 2006) Yesterday, the House of Commons Science and Technology Committee released a report entitled Drug Classification: Making a Hash of It? The conclusions of the report were based on findings from extensive observations and oral and written testimony. In the US, drugs are classified primarily by schedules, which divide up drugs into five schedules based on their relative medical utility compared to their potential for abuse and dependence. The UK also uses drug schedules, but it additionally divides drugs into three classes strictly on their perceived health risks. Image from the BBC

IBM's "neurosynaptic" chips are the closest thing to a synthetic brain yet A nice, clear, and mostly correct statement. However, you are forgetting one thing: Those in power wish to stay in power. Those who have power wish to have more power. And those who have property that could suddenly not be "theirs" would be highly resistant to relinquishing said property. As a programmer and developer, I can see the day coming where systems can easily outgrow their original programming. Right now that's a binary tug of war between the glitch and the software - and it usually either results in an accurate result or a failure state. Eventually the system learns that it can generate responses similar to but not constricted by its original parameters. The flip side of this, still, is what part of a human enhanced with technology is required to be "original" before they are considered more machine than man. Hence, blurry line. Like I said, its not here yet, but it will be soon.

Blindness eased by historic stem cell treatment - health - 25 January 2012 For the first time since they were discovered 13 years ago, human embryonic stem cells (hESCs) have shown medical promise. Two people with eye degeneration both say their vision improved in the four months after they received implants of retinal pigment epithelial cells made from hESCs. The treatments were also safe, with no sign that the cells triggered aggressive tumours called teratomas, no sign of immune rejection of the cells, and no inflammation. Discovered in 1998, hESCs had previously failed to deliver on their medical promise. One of the women in the trial had Stargardt disease, an inherited form of eye degeneration in which the pigment cells wither and die. Before the treatment she could only make out hand movements, but afterwards her vision in the treated eye had improved enough to discern finger movements too. "That doesn't really capture the difference it's made in her life," says Lanza. Stem cell boost Former US president George W. More From New Scientist More from the web