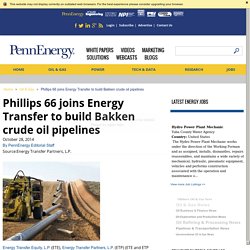 (ETE), Energy Transfer Partners, L.P. (ETP) (ETE and ETP collectively, “Energy Transfer”) and Phillips 66 (PSX) announced that they have formed two joint ventures to develop the previously announced Dakota Access Pipeline (DAPL) and Energy Transfer Crude Oil Pipeline (ETCOP) projects. Energy Transfer holds a 75 percent interest in each joint venture and will operate both pipeline systems. Phillips 66 owns the remaining 25 percent interests and will fund its proportionate share of the construction costs. The DAPL and ETCOP projects are expected to begin commercial operations in the fourth quarter of 2016. [Native Advertisement] “We look forward to working with Phillips 66 to build this much-needed pipeline infrastructure to link rapidly growing supplies of domestically produced light crude oil in the Bakken/Three Forks play to refineries throughout the country,” said Kelcy Warren, chairman of ETE and chairman and CEO of ETP. 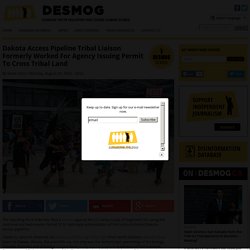 Slated to carry oil obtained via hydraulic fracturing (“fracking”) from North Dakota's Bakken Shale basin to Patoka, Illinois, the plaintiffs say not only was the Army Corps' permitting of the Energy Transfer Partners and Enbridge Corporation jointly owned pipeline a violation of the National Environmental Policy Act (NEPA) and the Clean Water Act, but also a violation of the National Historic Preservation Act's (NHPA) Section 106. A review of court documents for the case currently unfolding in the U.S. District Court in Washington, D.C. has revealed that the tribal liaison for Energy Transfer Partners tasked with abiding by Section 106 passed through the revolving door and formerly worked for the Army Corps. 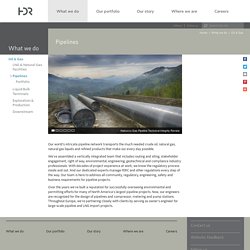 We've assembled a vertically integrated team that includes routing and siting, stakeholder engagement, right of way, environmental, engineering, geotechnical and compliance industry professionals. The Real Victim in the Dakota Access Pipeline Controversy Is the Company behind the Project. Transparency on Oil, Gas, Coal Revenues Moving Forward. Transparency on Oil, Gas, Coal Revenues Moving Forward May 7, 2013 The United States came one step closer to greater natural resources revenue transparency last week when representatives from industry, government, and civil society came together for the second time at the Department of the Interior. 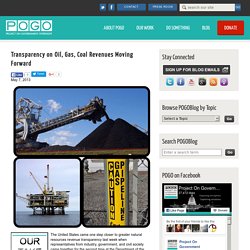 On the table for the May 1 and 2 meetings was which natural resources, types of lands, and revenues will be subject to heightened accountability standards under the Extractive Industries Transparency Initiative (EITI), a voluntary, global effort the United States joined this year. Oil, gas, and coal royalties on federal lands are in. Hardrock minerals (such as uranium and gold), saleable minerals (such as gravel and sand), renewable energies (such as solar and wind), and forestry are still up for discussion. 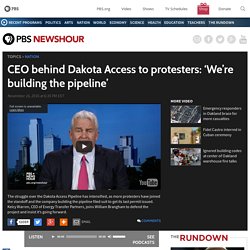 Meanwhile, the company building the pipeline is pushing back, filing suit in federal court yesterday to get its last permit issued. William Brangham continues his reporting on this legal and environmental standoff. WILLIAM BRANGHAM: From New York to Chicago to Los Angeles, protests against the Dakota Access oil pipeline have spread nationwide this week. North Dakota Office of State Tax Commissioner. ND INDUSTRIAL COMMISSION.

Uncovered Emails Raise Suspicions of Oil Company Paying Police for DAPL Crackdown. The Super Twisted History Of The Dakota Access Pipeline. Pipeline route plan first called for crossing north of Bismarck. An early proposal for the Dakota Access Pipeline called for the project to cross the Missouri River north of Bismarck, but one reason that route was rejected was its potential threat to Bismarck’s water supply, documents show. 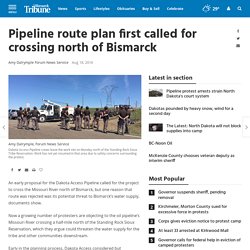 Now a growing number of protesters are objecting to the oil pipeline’s Missouri River crossing a half-mile north of the Standing Rock Sioux Reservation, which they argue could threaten the water supply for the tribe and other communities downstream. Early in the planning process, Dakota Access considered but eliminated an alternative that would have crossed the Missouri River about 10 miles north of Bismarck instead of the route currently under construction. The U.S. Army Corps of Engineers evaluated the Bismarck route and concluded it was not a viable option for many reasons. One reason mentioned in the agency’s environmental assessment is the proximity to wellhead source water protection areas that are avoided to protect municipal water supply wells. Loaded: 0% DAPL Pipeline Interests Try Outrageous Fait Accompli and Destroy Ancient Sites.

Fait accompli (a thing that has already happened or been decided before those affected hear about it, leaving them with no option but to accept) Energy Transfer Inc. and invested owners of the proposed North Dakota Access Pipeline (DAPL), have begun psychological warfare against peaceful protestors near the Standing Rock Sioux Reservation. 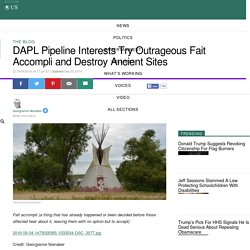 It will be a challenge for the persecuted to stay vigilant, stay strong and stay true to their beliefs. So far the People have remained nonviolent in the face of dog attacks on their bodies and their horses, while facing extreme psychic trauma in the form of desecration of graves and sacred sites. On Saturday “sacred places containing ancient burial sites, places of prayer and other significant cultural artifacts of the Standing Rock Sioux Tribe were destroyed by Energy Transfer Partners,” Tribal Chairman David Archambault II said in a press release. Reading through the 53 page initial “motion for the U.S. Moles vs.