50 Ways To Boost Your Brain Power 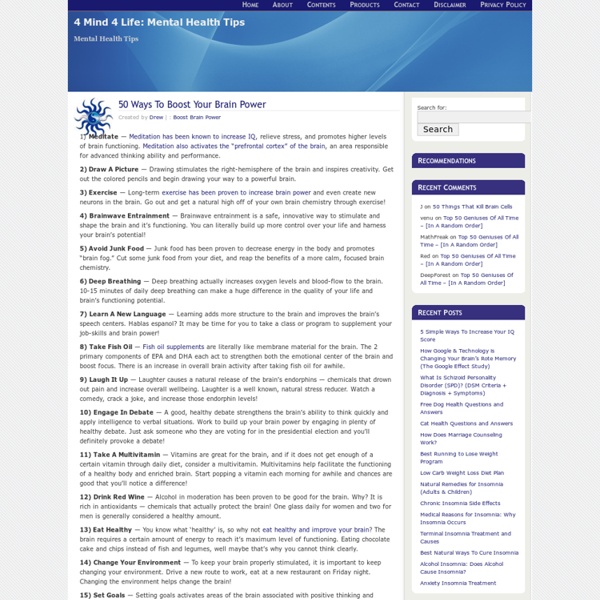 1) Meditate — Meditation has been known to increase IQ, relieve stress, and promotes higher levels of brain functioning. Meditation also activates the “prefrontal cortex” of the brain, an area responsible for advanced thinking ability and performance. 2) Draw A Picture — Drawing stimulates the right-hemisphere of the brain and inspires creativity. Get out the colored pencils and begin drawing your way to a powerful brain. 3) Exercise — Long-term exercise has been proven to increase brain power and even create new neurons in the brain. Go out and get a natural high off of your own brain chemistry through exercise! 4) Brainwave Entrainment — Brainwave entrainment is a safe, innovative way to stimulate and shape the brain and it’s functioning. 5) Avoid Junk Food — Junk food has been proven to decrease energy in the body and promotes “brain fog.” 7) Learn A New Language — Learning adds more structure to the brain and improves the brain’s speech centers. 98 Comments »

Boost brainpower Sabrina Rogers Share on Facebook Share on Twitter Page 1 of 2 Whether you're having trouble concentrating at work or you just need an extra mental kick to make it through your finals, there are many foods, herbs and supplements that can improve your memory, concentration and focus. 16 Things I Wish They Had Taught Me in School I am 28 now. I don’t think about the past or regret things much these days. But sometimes I wish that I had known some of things I have learned over the last few years a bit earlier. That perhaps there had been a self-improvement class in school. And in some ways there probably was. Because some of these 16 things in this article a teacher probably spoke about in class. How To Boost Brain Power and Memory Until just a few years ago, doctors believed that the brain stopped making new neural connections - meaning that the memory began to get irreversibly worse - when the body stopped developing, usually in the early 20s. And doctors knew that, like any other part of the body, neurons weaken as people age. Loss of brain function due to neural breakdown was assumed to be a normal, unavoidable part of aging.

The Little Book of Procrastination Remedies Post written by Leo Babauta. Procrastination is one of those topics that, it seems, I can’t write enough about. There isn’t a person among us who doesn’t procrastinate, and that’s a fact of life. It’s deep within us. We think we’re going to do something later, or read that classic novel later, or learn French later.

Intendix Brain Waves To Computer Interface Brain controlled machine or computer? Intendix Brain-Computer Interface will let your convert your thought into computer system. In order to convert user’s brain wave, user must firstly wear the EEG cap that is connected to the attached PC. 70 Ways to Increase Your Brain Power 28. Creatine. This is a compound found in meat, used by athletes to help build muscle. 7 Lessons From 7 Great Minds - Global One TV - StumbleUpon Have you ever wished you could go back in time and have a conversation with one of the greatest minds in history? Well, you can’t sorry, they’re dead. Unless of course you’re clairaudient, be my guest. 120 Ways to Boost Your Brain Power Here are 120 things you can do starting today to help you think faster, improve memory, comprehend information better and unleash your brain’s full potential. Solve puzzles and brainteasers.Cultivate ambidexterity. Use your non-dominant hand to brush your teeth, comb your hair or use the mouse. Write with both hands simultaneously. Switch hands for knife and fork.Embrace ambiguity.

What Confucius Can Teach You About Living a Happier Life Image by Ivan Walsh (license). “It is better to play than do nothing.” “Men’s natures are alike; it is their habits that separate them.” “Only the wisest and stupidest of men never change.” Creativity 'closely entwined with mental illness' 17 October 2012Last updated at 06:49 GMT By Michelle Roberts Health editor, BBC News online Novelist Virginia Woolf killed herself Creativity is often part of a mental illness, with writers particularly susceptible, according to a study of more than a million people. Writers had a higher risk of anxiety and bipolar disorders, schizophrenia, unipolar depression, and substance abuse, the Swedish researchers at the Karolinska Institute found. They were almost twice as likely as the general population to kill themselves. The dancers and photographers were also more likely to have bipolar disorder.