Holocaust Controversies: Murray Rothbard, Lew Rockwell and Scientific Racism. In his review of Herrnstein and Murray's 'The Bell Curve', Murray Rothbard praised the book for "expressing in massively stupefying scholarly detail what everyone has always known but couldn't dare to express about race, intelligence, and heritability". 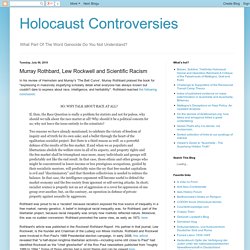 Rothbard reached the following conclusion: SO: WHY TALK ABOUT RACE AT ALL? Feminism and Anarcho-Capitalism: Strange Bedfellows. So what’s a nice old feminist broad like me doing hanging around with these nutty libertarians? 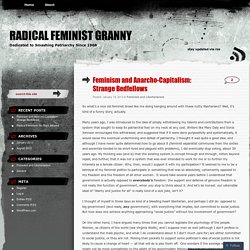 Well, it’s kind of a funny story, actually. Many years ago, I was introduced to the idea of simply withdrawing my talents and contributions from a system that sought to keep its patriarchal foot on my neck at any cost. Anarcha-feminism. A purple and black flag is often used to represent Anarcha-feminism. 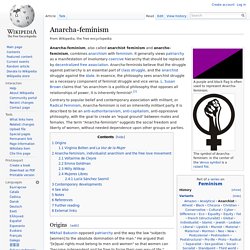 Contrary to popular belief and contemporary association with militant, or Radical Feminism, Anarcha-feminism is not an inherently militant party. It is described to be an anti-authoritarianism, anti-capitalism, anti-oppressive philosophy, with the goal to create an "equal ground" between males and females. The term "Anarcha-feminism" suggests the social freedom and liberty of women, without needed dependence upon other groups or parties. Origins[edit] Mikhail Bakunin opposed patriarchy and the way the law "subjects [women] to the absolute domination of the man. " Virginia Bolten and La Voz de la Mujer[edit] Cover of La Voz de la Mujer, pioneering Argentinian anarcha-feminist publication Anarcha-feminism, individualist anarchism and the free love movement[edit] Brazilian individualist anarchist Maria Lacerda de Moura lectured on topics such as education, women's rights, free love, and antimilitarism. 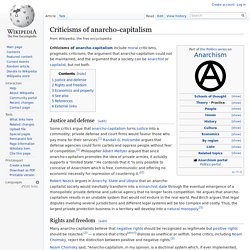 Justice and defense[edit] Some critics argue that anarcho-capitalism turns justice into a commodity; private defense and court firms would favour those who pay more for their services.[1] Randall G. Holcombe argues that defense agencies could form cartels and oppress people without fear of competition.[1] Philosopher Albert Meltzer argued that since anarcho-capitalism promotes the idea of private armies, it actually supports a "limited State.

" (Which) Feminism against (Which) Capitalism? Why every good capitalist should also be a feminist. Ferguson Reveals Racists In Libertarian Clothing. There are two kinds of libertarians: true believers in the constitution and racists hiding behind the constitution. 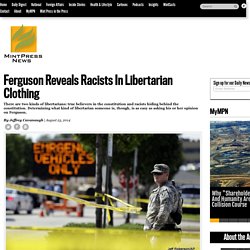 Determining what kind of libertarian someone is, though, is as easy as asking his or her opinion on Ferguson. A member of the Missouri National Guard stands guard at a police command post Tuesday, Aug. 19, 2014, in Ferguson, Mo. The shooting of Michael Brown in Ferguson, Missouri, has once again highlighted the bitter divisions between left and right and black and white in America. As might be expected, the usual suspects on both sides have lined up to support their view of events and lambast the other side’s interpretation of what went on between Mr. Brown and the police officer who killed him. Emma Goldman. Emma Goldman was born in Kovno, Lithuania in 1869 into a religiously traditional household. 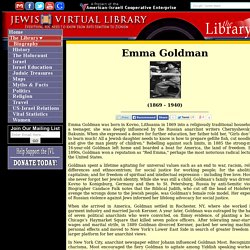 As a teenager, she was deeply influenced by the Russian anarchist writers Chernyshevsky and Bakunin. When she expressed a desire for further education, her father told her, "Girls don’t have to learn much! All a Jewish daughter needs to know is how to prepare gefilte fish, cut noodles fine and give the man plenty of children. " Rebelling against such limits, in 1885 the strong-minded 16-year-old Goldman left home and boarded a boat for America, the land of freedom.

By the 1890s, Goldman won a reputation as "Red Emma," perhaps the most notorious radical lecturer in the United States. American Experience. Here's The Real Story Behind Ron Paul's Racist Newsletters. So as Ron Paul is on track to win the Iowa caucuses, he is getting a new dose of press scrutiny. 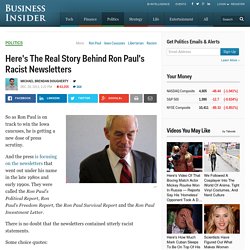 And the press is focusing on the newsletters that went out under his name in the late 1980s and early 1990s. They were called the Ron Paul's Political Report, Ron Paul's Freedom Report, the Ron Paul Survival Report and the Ron Paul Investment Letter. There is no doubt that the newsletters contained utterly racist statements. Some choice quotes: Timeline of libertarian thinkers. This article is a list of major figures in the theory of libertarianism, a philosophy asserting that individuals have a right to acquire, keep, and exchange their holdings and that the primary purpose of government is to protect these rights.[1] Libertarian thinkers[edit] Adam Smith (1723–1790): Philosopher and economist. 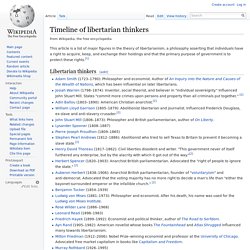 Author of An Inquiry into the Nature and Causes of the Wealth of Nations, which has been influential on later libertarians.Josiah Warren (1798–1874): Inventor, social theorist, and believer in "individual sovereignty. " Influenced John Stuart Mill. States "commit more crimes upon persons and property than all criminals put together. " [2]Adin Ballou (1803–1890): American Christian anarchist.[2]William Lloyd Garrison (1805–1879): Abolitionist libertarian and journalist. References[edit]

Ferguson Reveals Racists In Libertarian Clothing. The Marriage of Libertarians and Racists. Exclusive: The modern Republican Party and its chic libertarians have dallied with white supremacists as a political necessity, because blacks and other minorities have rallied to the Democrats due to their better civil rights record. 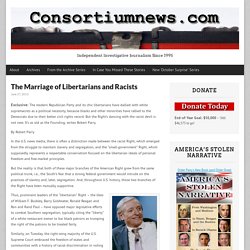 Ron Paul Racist? Libertarian to Speak At "Anti-Semitic" Conference. Will the Pauls ever successfully distance themselves from allegations of racism? 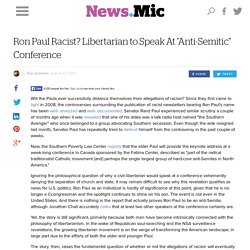 Since they first came to light in 2008, the controversies surrounding the publication of racist newsletters bearing Ron Paul's name has been well- analyzed and well- documented. Senator Rand Paul experienced similar scrutiny a couple of months ago when it was revealed that one of his aides was a talk radio host named "the Southern Avenger" who once belonged to a group advocating Southern secession. Even though the aide resigned last month, Senator Paul has repeatedly tried to defend himself from the controversy in the past couple of weeks. U. of Iowa Censors, Apologizes for Art About Racism. A Dictionary of Conservative and Libertarian Thought (Routledge Revivals) - Google Books.

Libertarian to be at 1st U.S. Senate debate, drawing split reaction from Daines, Walsh. HELENA — Libertarian U.S. Senate candidate Roger Roots will be on the stage Saturday in the race’s first general-election debate — and the campaign of Republican Steve Daines is none too happy about it. “You can’t do an Internet search on Roger Roots without coming across a racist or offensive comment that he has made,” said Brock Lowrance, Daines’ campaign manager. “There is no room for racism in civil dialogue, and it does not reflect who we are as Montanans.” Yet Democratic U.S. Sen. Brendan O'Neill (journalist) Since them, O'Neill has contributed articles to publications in the United Kingdom, the United States and Australia including The Spectator, the New Statesman, The Guardian, BBC News Online, The Australian, The Christian Science Monitor, The American Conservative, Salon.com, and Rising East.

He occasionally blogged at Comment is free,[1] but is now a regular blogger at telegraph.co.uk.[2] He writes a column for The Big Issue in London and The Australian in Sydney. O'Neill has criticised the notion of tackling global warming by solely reducing carbon emissions, and instead advocates technological progress as a method of overcoming any side-effects of climate change.[3] In January 2006, he co-founded the Manifesto Club, an organisation "with the aim of challenging cultural trends that restrain and stifle people's aspirations and initiative". Libertarian Party on Crime. Rand Paul’s Mixed Inheritance. Continue reading the main story Video The libertarian faithful — antitax activists and war protesters, John Birch Society members and a smattering of “truthers” who suspect the government’s hand in the 2001 terrorist attacks — gathered last September, eager to see the rising star of their movement.