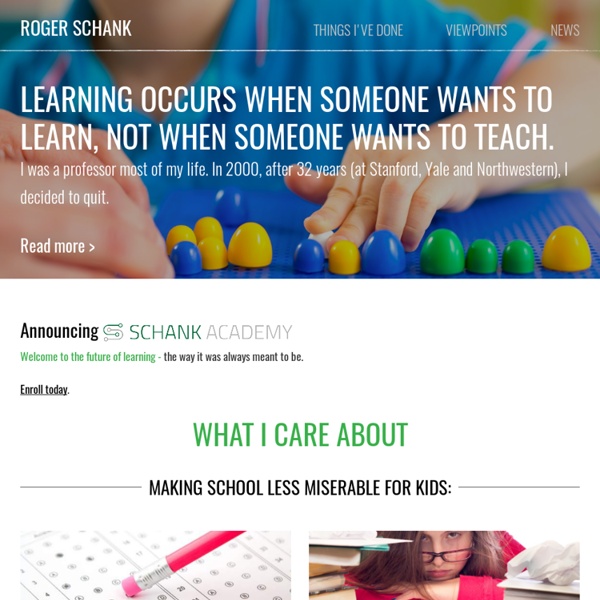 Teaching and Learning for a Sustainable Future Introduction At the heart of all learning is the way we process our experiences, especially our critical reflections on our experiences. This module introduces experiential education as a key approach to student-centred learning for a sustainable future. Experiential learning engages students in critical thinking, problem solving and decision making in contexts that are personally relevant to them. This approach to learning also involves making opportunities for debriefing and consolidation of ideas and skills through feedback, reflection, and the application of the ideas and skills to new situations.

How technology can actually change education By Roger Schank You can’t read something about education these days without reading about how technology will change everything. Sorry to be a downer, but technology will change nothing if what is meant by technology is that we have new ways of delivering the same old material. The basic philosophy behind education for millennia has been that experts know stuff, so the experts (or their agents) will tell you the stuff you need to know. The problem is learning simply doesn’t work that way. People learn by trying things out and seeing how it goes.

Researchers training in Hawaii to simulate Mars mission - Blogs HILO, Hawaii -- Scientists will mix biology and geology this month inside Hawaii Volcanoes National Park as they help NASA get ready for an eventual manned mission to Mars. The researchers will hike around Mauna Ulu to practice collecting rock samples as they would on the Red Planet, The Hawaii Tribune-Herald reported Friday. The purpose is to develop protocols that would be used on a real Mars mission to identify and protect samples that could host life. One of the concerns is contamination of rocks that might be home to living bacteria, said John Hamilton, an astronomy faculty member at the University of Hawaii at Hilo.

WISE - Course Room Set-up Kit Our training courses don’t exist to train you or your employees in your profession or technical field. That’s not our purpose. Our materials don’t cover how to perform open-heart surgery or how to repair a car; we assume you know your profession. Mars analog habitat - Wikipedia A Mars analog habitat is one of several historical, existing or proposed research stations designed to simulate the physical and psychological environment of a Martian exploration mission. These habitats are used to study the equipment and techniques that will be used to analyze the surface of Mars during a future manned mission, and the simulated isolation of the volunteer inhabitants allows scientists to study the medical and psychosocial effects of long-term space missions. They are often constructed in support of extensive Mars analogs (see List of Mars analogs). However, sometimes existing natural places are also valued as Mars analogs, such as a high Earth altitude where the pressure is equal to the pressure at the surface of Mars or a certain cave. Manned Mars habitats are featured in most human Mars missions; an alternative may be terraforming or telepresence. Scientific motivation[edit]

Beck's Hybrids How, when, and where should you tissue test? How do you handle your samples once you pull them? What should you be thinking about when evaluating the results? Join Jim Schwartz, Director of PFR and Agronomy, and Beck’s Southern Illinois PFR team in the latest episode of #AskPFR as they look to answer some of the top questions on farmers’ minds. Do you have questions about one of our PFR studies or something you’re seeing in the field? Make sure to send them to us on social media using @beckshybrids and #AskPFR. Independent Checksheets We have set up, by necessity, an Independent Scientology course room, not affiliated with DM's because we want to practice Scientology and due to DM's 'Unclean Hands' (a doctrine in equity) we have been compelled to do so. We can't get Standard Scientology from DM's church anymore, because it isn't there and because he prevents us from getting it. So, here we are, with a First Amendment right, to practice our chosen religion, as guaranteed by that First Amendment and also put forth by L. Ron Hubbard himself in the Articles and Bylaws of CST differentiating a Church of Scientology (including RTC) from the 'religion of Scientology'. These Independent Checksheets (IC) were compiled by Dan Koon, Class VI Auditor who worked with LRH in Ron's Technical Research and Compilations (RTRC) based on LRH's 1978/1987 Checksheets on which tens of thousands of standard auditors were successfully trained.

Flashline Mars Arctic Research Station - Wikipedia The Flashline Mars Arctic Research Station (FMARS) is the first of two simulated Mars habitats (or Mars Analog Research Stations) established and maintained by the Mars Society. Background[edit] Devon Island and surroundings. Haughton crater also shown Endless Ocean - Wikipedia Endless Ocean (known as Forever Blue in Japan) is a video game for the Wii.[3] It is published by Nintendo and was developed by Arika. It was released on August 2, 2007, in Japan, November 9, 2007, in Europe and January 21, 2008 in North America after it had been planned for an October 2007 release. A sequel entitled Endless Ocean 2: Adventures of the Deep was released in Japan on September 17, 2009, and in Europe on February 5, 2010; it was released in North America on February 22, 2010 with the title Endless Ocean: Blue World.[4][5] Gameplay[edit]

Modeling Introduction Abstract. Mathematics has been described as the science of patterns. Natural science can be characterized as the investigation ofpatterns in nature. Central to both domains is the notion of model as a unit of coherently structured knowledge. Modeling Theory is concerned with models as basic structures in cognition as well as scientific knowledge. Mars Desert Research Station - Wikipedia The Mars Society's Mars Desert Research Station The Mars Desert Research Station (MDRS) is the second of four planned simulated Mars surface exploration habitats (or Mars Analogue Research Stations) owned and operated by the Mars Society. Built in the western United States in the early 2000s, it is typically manned by small crews who visit the site for short periods of time to conduct scientific research. Besides a large building that serves as the center of activities, the complex includes a greenhouse, an observatory, and assorted open areas.

A Software Tool for Teaching Backcross Breeding Simulation + Author Affiliations Summary Plant breeding programs involve multiple steps, and their complete development cannot be experienced by students in a single academic year. Tools of communication and information technologies offer a great opportunity to improve students' skills, but only a few software are available for training undergraduate students in plant breeding programs. Here we present a student-friendly software tool, Retromelon, for simulating the backcross breeding method. We also evaluate its suitability and performance as a learning tool.