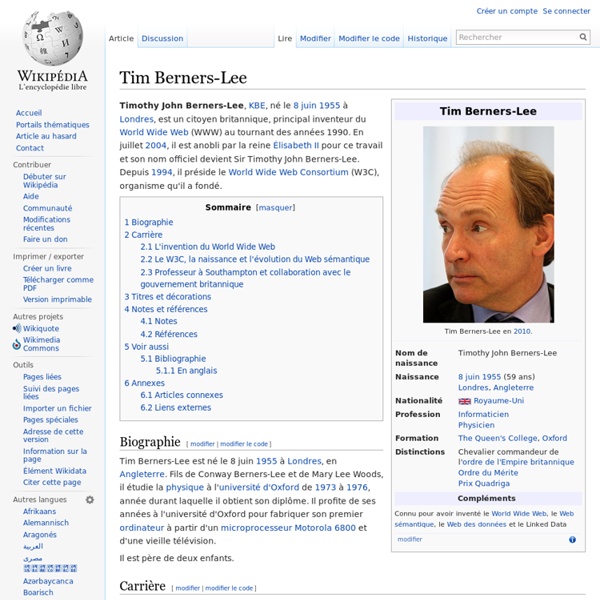 How Ada Lovelace and Charles Babbage Invented the World’s First Computer: An Illustrated Adventure in Footnotes and Friendship In 1843, Ada Lovelace — the only legitimate child of the poet Lord Byron — translated a scientific paper by Italian military engineer Luigi Menabrea titled Sketch of an Analytical Engine, adding seven footnotes to it. Together, they measured 65 pages — two and half times the length of Menabrea’s original text — and included the earliest complete computer program, becoming the first true paper on computer science and rendering Lovelace the world’s first computer programmer. She was twenty-seven. Zeev Suraski Suraski at a Toronto conference in 2010 Zeev Suraski (Hebrew: זאב סורסקי‎ pronounced [zeˈʔev suˈʁaski]) is an Israeli programmer, PHP developer[1][2] and co-founder of Zend Technologies. A graduate of the Technion in Haifa, Israel, Suraski and Andi Gutmans created PHP 3 in 1997.[3] In 1999 they wrote the Zend Engine, the core of PHP 4, and founded Zend Technologies, which has since overseen PHP advances.[4] The name Zend is a portmanteau of their forenames, Zeev and Andi. Suraski is an emeritus member of the Apache Software Foundation, and was nominated for the FSF Award for the Advancement of Free Software in 1999. Zeev Suraski is the CTO for Zend Technologies.

The World Wide Web project The WorldWideWeb (W3) is a wide-area hypermedia information retrieval initiative aiming to give universal access to a large universe of documents. Everything there is online about W3 is linked directly or indirectly to this document, including an executive summary of the project, Mailing lists , Policy , November's W3 news , Frequently Asked Questions . What's out there?

Connection Machine Thinking Machines CM-2 at the Computer History Museum in Mountain View, California. One of the face plates has been partially removed to show the circuit boards inside. The Connection Machines were a series of supercomputers that grew out of Danny Hillis's doctoral research at MIT in the early 1980s on alternatives to the traditional von Neumann architecture of computation. The Connection Machines (CMs), beginning with CM-1, were originally intended for applications in artificial intelligence and symbolic processing, but later versions found greater success in the field of computational science.

Brad Fitzpatrick Bradley Joseph "Brad" Fitzpatrick (born February 5, 1980 in Iowa), is an American programmer. He is best known as the creator of LiveJournal and is the author of a variety of free software projects such as memcached and OpenID. Born in Iowa, Fitzpatrick grew up in Beaverton, Oregon and majored in computer science at the University of Washington in Seattle. How Ada Lovelace, Lord Byron’s Daughter, Became the World’s First Computer Programmer Augusta Ada King, Countess of Lovelace, born Augusta Ada Byron on December 10, 1815, later came to be known simply as Ada Lovelace. Today, she is celebrated as the world’s first computer programmer — the first person to marry the mathematical capabilities of computational machines with the poetic possibilities of symbolic logic applied with imagination. This peculiar combination was the product of Ada’s equally peculiar — and in many ways trying — parenting. Eleven months before her birth, her father, the great Romantic poet and scandalous playboy Lord Byron, had reluctantly married her mother, Annabella Milbanke, a reserved and mathematically gifted young woman from a wealthy family — reluctantly, because Byron saw in Annabella less a romantic prospect than a hedge against his own dangerous passions, which had carried him along a conveyer belt of indiscriminate affairs with both men and women.

Michael Wesch Michael Lee Wesch (born June 22, 1975) is associate professor of cultural anthropology at Kansas State University. Wesch's work also includes media ecology and the emerging field of digital ethnography, where he studies the effect of new media on human interaction. Wesch is a cultural anthropologist and media ecologist exploring the effects of new media on human interaction. He graduated summa cum laude from the Kansas State University Anthropology Program in 1997 and returned as a faculty member in 2004 after receiving his PhD in Anthropology at the University of Virginia.[1] There he pursued research on social and cultural change in Melanesia, focusing on the introduction of print and print-based practices like mapping and census-taking in the remote Mountain Ok region of Papua New Guinea where he lived for a total of 18 months from 1999-2003. This work inspired Wesch to examine the effects of new media more broadly, especially digital media.