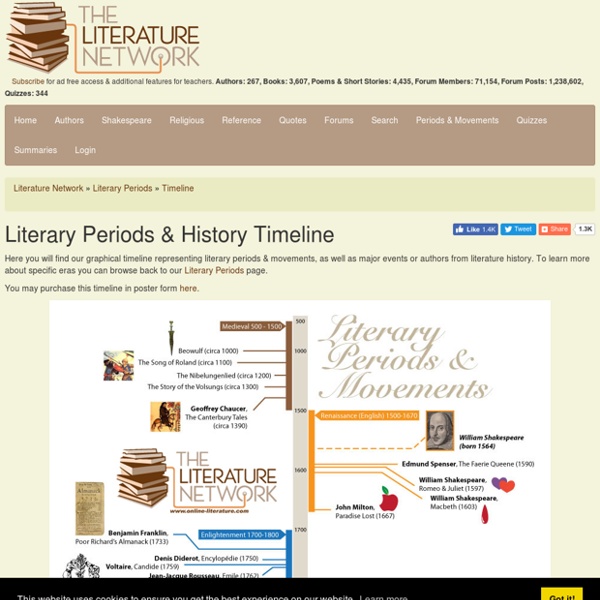 List of timelines From Wikipedia, the free encyclopedia This is a list of timelines currently on Wikipedia. §Types[edit] §General timelines[edit] 45 Great Sourced Quotes about Books The best quotes about books, from some of the most famous writers in the world Here is a list of our favourite quotes about books from various writers, some famous, some not so famous. We’ve only included those quotations for which we’ve managed to track down a source, whether in print or online, so you know these are authentic quotes about books, rather than of the amusing-but-apocryphal kind. When I was a child I read books far too old for me and sometimes far too young for me.

compcolts - English Curriculum Resources Skip to main content Create interactive lessons using any digital content including wikis with our free sister product TES Teach. Get it on the web or iPad! Etymology: Languages that have contributed to English vocabulary over time. In Borrowed Words: A History of Loanwords in English, I examine how words borrowed from different languages have influenced English throughout its history. The above feature summarizes some of the main data from the book, focusing on the 14 sources that have given the most words to English, as reflected by the new and revised entries in the Oxford English Dictionary. Using the date buttons at the top of the graphic, you can compare the impact that different languages have made on English over time. In the "per period" view, you can see the proportions of words coming into English from each source in 50-year slices from 1150 up to the present day. Compare, for instance, how the input from German has grown and then declined again from 1800 to the present day.

The Romantic Age: Topic 2: Overview The Gothic begins with later-eighteenth-century writers' turn to the past; in the context of the Romantic period, the Gothic is, then, a type of imitation medievalism. When it was launched in the later eighteenth century, The Gothic featured accounts of terrifying experiences in ancient castles — experiences connected with subterranean dungeons, secret passageways, flickering lamps, screams, moans, bloody hands, ghosts, graveyards, and the rest. By extension, it came to designate the macabre, mysterious, fantastic, supernatural, and, again, the terrifying, especially the pleasurably terrifying, in literature more generally. Closer to the present, one sees the Gothic pervading Victorian literature (for example, in the novels of Dickens and the Brontës), American fiction (from Poe and Hawthorne through Faulkner), and of course the films, television, and videos of our own (in this respect, not-so-modern) culture.

Civil Rights Movement Timeline (14th Amendment, 1964 Act, Human Rights Law) Jan. 23 The 24th Amendment abolishes the poll tax, which originally had been instituted in 11 southern states after Reconstruction to make it difficult for poor blacks to vote. Summer The Council of Federated Organizations (COFO), a network of civil rights groups that includes CORE and SNCC, launches a massive effort to register black voters during what becomes known as the Freedom Summer. It also sends delegates to the Democratic National Convention to protest—and attempt to unseat—the official all-white Mississippi contingent. July 2

96 Incredibly Useful Links for Teaching and Studying Shakespeare The idea of tackling Shakespeare in school has sometimes sent chills down both students’ and teachers’ spines, but the truth is that studying Shakespeare doesn’t have to be so daunting. His plays and sonnets are filled with themes that are relevant even today, are humorous, lyrical, and provide important historical content. Most importantly, Shakespeare knew how to tell a good story. Great Short Stories for Teaching Theme in Fiction Great Short Stories for Teaching Theme These short stories are excellent for teaching theme in fiction. Use the accompanying writing lesson ideas to engage students.

Geologic time scale Online exhibits Geologic time scale Take a journey back through the history of the Earth — jump to a specific time period using the time scale below and examine ancient life, climates, and geography. You might wish to start in the Cenozoic Era (65.5 million years ago to the present) and work back through time, or start with Hadean time (4.6 to 4 billion years ago)* and journey forward to the present day — it's your choice. [Note: "mya" means "millions of years ago"] Ian McKellen Reads a Passionate Speech by William Shakespeare, Written in Defense of Immigrants The identity of William Shakespeare has been a literary mystery for four hundred years, inspiring theory after theory, book after book. There has been, indeed, little biographical evidence to work with, though paleographer and “literary detective” Heather Wolfe has very recently filled in some critical gaps. It was long thought that Shakespeare’s will, in which he bequeaths to his wife his “second best bed,” was the only document in his hand, aside from a few signatures here and there. Since around the turn of the 20th century, however, scholars have come to agree that three pages of a manuscript in an Elizabethan play called Sir Thomas More contain Shakespeare’s handwriting. The play, writes the British Library—who house the physical pages and have digital scans at their site—tells the story of “the Tudor lawyer and polymath who was sentenced to death for refusing to recognise Henry VIII as Supreme Head of the Church in England.”

J.R.R. Tolkien Reads from The Lord of the Rings and Sings “Sam’s Rhyme of the Troll” in a Rare Recording By Maria Popova In the summer of 1952, sixty-year-old J.R.R. Tolkien (January 3, 1892–September 2, 1973) encountered a tape recorder for the first time, which resulted in some wonderful archival audio of the beloved author reading from The Hobbit. So enchanted was Tolkien with this novel technology that he proceeded to record himself reading much of his work over the years to come.