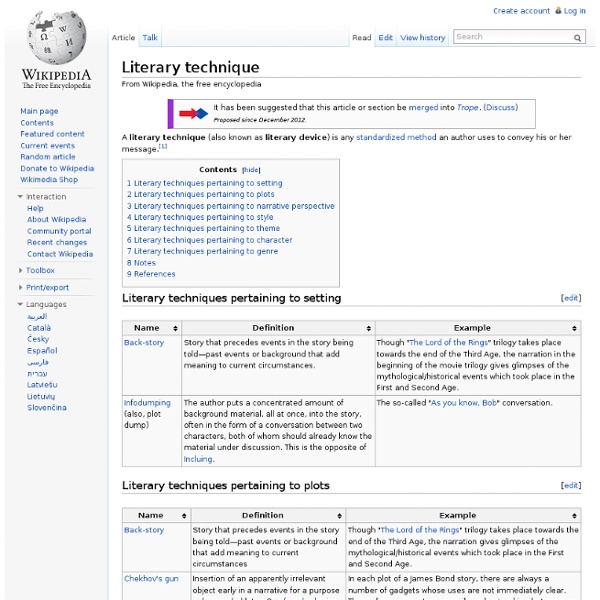 A Handbook of Rhetorical Devices Robert A. Harris Version Date: January 19, 2013 This book contains definitions and examples of more than sixty traditional rhetorical devices, (including rhetorical tropes and rhetorical figures) all of which can still be useful today to improve the effectiveness, clarity, and enjoyment of your writing. Note: This book was written in 1980, with some changes since. The devices presented are not in alphabetical order. A Preface of Quotations Whoever desires for his writings or himself, what none can reasonably condemn,the favor of mankind, must add grace to strength, and make his thoughts agreeable as well as useful. Men must be taught as if you taught them not; And things unknown propos'd as things forgot. Style in painting is the same as in writing, a power over materials, whether words or colors, by which conceptions or sentiments are conveyed. Introduction Practice these; try them out. Resources by Edward P. Rhetorical Devices 1. 2. 4. 1 2 3 4 5 6 7 | Next Page Hosted By

Imagery Imagery, in a literary text, is an author's use of vivid and descriptive language to add depth to his or her work. It appeals to human senses to deepen the reader's understanding of the work. Forms of imagery[edit] There are seven types of imagery, each corresponding to a human sense, feeling, or action: Visual imagery pertains to sight, and allows you to visualize events or places in a work.Auditory imagery pertains to a sound. See also[edit] (examples of imagery) References[edit] External links[edit]

Why I Write Gangrel, [No. 4, Summer] 1946 George Orwell’s “National Union of Journalists” press card (1943) From a very early age, perhaps the age of five or six, I knew that when I grew up I should be a writer. I was the middle child of three, but there was a gap of five years on either side, and I barely saw my father before I was eight. However, throughout this time I did in a sense engage in literary activities. When I was about sixteen I suddenly discovered the joy of mere words, i.e. the sounds and associations of words. So hee with difficulty and labour hard Moved on: with difficulty and labour hee. which do not now seem to me so very wonderful, sent shivers down my backbone; and the spelling ‘hee’ for ‘he’ was an added pleasure. I give all this background information because I do not think one can assess a writer’s motives without knowing something of his early development. (i) Sheer egoism. (ii) Aesthetic enthusiasm. (iii) Historical impulse. It is not easy.

Author's Craft - Narrative Elements - Foreshadowing Narrative Elements Foreshadowing What is it? Foreshadowing is a way of indicating or hinting at what will come later. Foreshadowing can be subtle, like storm clouds on the horizon suggesting that danger is coming, or more direct, such as Romeo and Juliet talking about wanting to die rather than live without each other. Sometimes authors use false clues to mislead a reader. Why is it important? Foreshadowing adds dramatic tension to a story by building anticipation about what might happen next. How do I create it? Create foreshadowing by placing clues, both subtle and direct, into the text. To create foreshadowing in fiction or non-fiction, Give the reader direct information by mentioning an upcoming event or explaining the plans of the people or characters portrayed in the text: "As the Lincolns rode to Ford's Theatre on 10th Street, John Wilkes Booth and three conspirators were a block away at the Herndon House. Self Check Example Foreshadowing Tip

Showing Character Change by Joy Cagil As has been indicated by writers and writing coaches, in a good story, characters create conflict; consequently, conflict creates drama. In addition, a story shows more depth if its characters go through changes. The question is: how can a writer go about showing the changes inside his characters during the trajectory of the story? Let us take a brief look at how some characters may go through a change in a story. If a story is written from the first person point of view, the character may show the workings of his mind through the narration of his feelings, or the change can be followed in a character's journal. The change can also be shown through the interaction of characters called confidantes. If a major character has his opposite, at the end of the story when that character has gone through a change, the reader finds that the character's understanding and values has neared to that of his opposite. About the Author Joy Cagil is an author on

Scholastic- Craft Writing by Brenda Power Supporting children in honing their writing craft can be daunting because most of us don't feel accomplished ourselves as writers. That's why focusing on beginnings and endings works so well: it's concrete and manageable. The approaches outlined in this cover story are favorites of the teachers I visit, and are easily adapted for students of any age. In this article, you'll find: A kiss hello...a wave good-bye...an airplane fading in the sky. Our lives are marked by beginnings and endings. The best leads and endings don't just happen; they are crafted. If you take some time to make leads and endings the focus of your lessons, youmay be surprised at how quickly students' overall writing skills improve. l. Together, you may also want to create separate charts for beginnings and endings.Classify the beginnings you read according to whether they contain dialogue, a "climactic moment," helpful introductory information, or other categories you discover through reading. 2. 3. 4.

Allen Guthrie's Infamous Writing Tips Allen Guthrie, an acquisition editor for Point Blank Press, wrote up a 'white paper' three years ago called 'Hunting Down the Pleonasms' that has become a cult classic. Guthrie gave Adventure Books of Seattle permission to reprint this document wherever we liked. It is a permanent download over at our main site, but I wanted to reproduce it here. It is very specific. Over at the AB site, it's been downloaded hundreds of times, and I think every writer should post this on the wall near their computer. 'Hunting Down the Pleonasms' I can’t stress strongly enough that writing is subjective. 1: Avoid pleonasms. 2: Use oblique dialogue. 3: Use strong verbs in preference to adverbs. 4: Cut adjectives where possible. 5: Pairs of adjectives are exponentially worse than single adjectives. 6: Keep speeches short. 7: If you find you’ve said the same thing more than once, choose the best and cut the rest. 8: Show, don’t tell. 9: Describe the environment in ways that are pertinent to the story.

13 Writing Tips Twenty years ago, a friend and I walked around downtown Portland at Christmas. The big department stores: Meier and Frank… Fredrick and Nelson… Nordstroms… their big display windows each held a simple, pretty scene: a mannequin wearing clothes or a perfume bottle sitting in fake snow. But the windows at the J.J. She said the perfect comment at the perfect moment, and I remember it two decades later because it made me laugh. For this essay, my goal is to put more in. Number One: Two years ago, when I wrote the first of these essays it was about my "egg timer method" of writing. Number Two: Your audience is smarter than you imagine. Number Three: Before you sit down to write a scene, mull it over in your mind and know the purpose of that scene. Number Four: Surprise yourself. Number Five: When you get stuck, go back and read your earlier scenes, looking for dropped characters or details that you can resurrect as "buried guns." Number Seven: Let yourself be with Not Knowing.

How novels came to terms with the internet Back in the early 1990s, David Foster Wallace wrote an essay urging young American novelists to find a way to come to terms with the role of television in contemporary life. He believed they were going about it the wrong way, but at least they were trying, which was more than he could say for the generation of older writers he complained about in the same piece ("E Unibus Pluram: Television and US Fiction"). One of these, an unnamed "gray eminence" who ran a graduate workshop that Wallace attended in the 1980s, scolded his students for including "trendy mass-popular-media" references in their work. Treating of such things, he insisted, would only date their writing, pegging it as belonging to the "frivolous Now" instead of to the proper province of literature, the "Timeless". Twenty years later, in the current frivolous Now, Wallace's essay itself seems a shade dated, and not just because today's novelists confront a very different communications behemoth in the form of the internet.