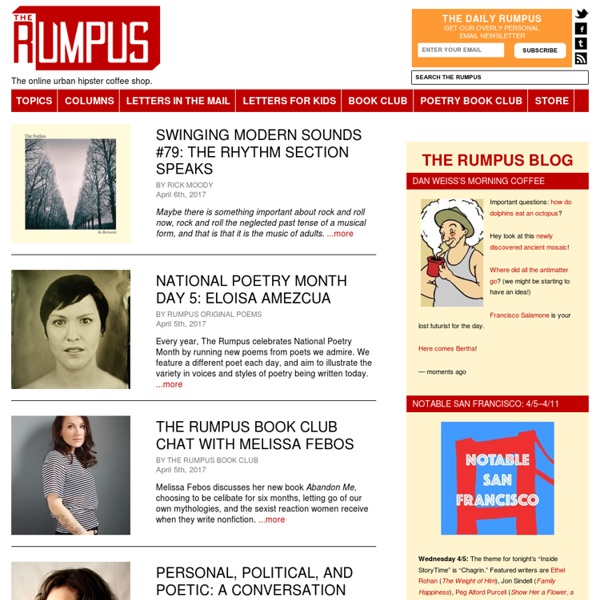 Doesn’t it always start with poetry? Or at least a poet. Or at least a writer. ...more Sex in both endeavors [Nymphomanic and Under the Skin] is a must; an addiction in the former and a tool for sustenance in the latter. But in both cases the women are driven by something beyond their control and as a result, they prey.

David Foster Wallace on Writing, Self-Improvement, and How We Become Who We Are by Maria Popova “Good writing isn’t a science. It’s an art, and the horizon is infinite. You can always get better.” In late 1999, David Foster Wallace — poignant contemplator of death and redemption, tragic prophet of the meaning of life, champion of intelligent entertainment, admonisher against blind ambition, advocate of true leadership — called the office of the prolific writer-about-writing Bryan A.

25 Beautifully Illustrated Thought-Provoking Questions 405 Flares Facebook 137 Twitter 5 Google+ 194 StumbleUpon 1 Pin It Share 68 68 405 Flares × A question that makes you think is worth asking… At the cusp of a new day, week, month, or year, most of us take a little time to reflect on our lives by looking back over the past and ahead into the future. Nieman Foundation AP photographer Anja Niedringhaus, NF ’07, shown in a 2005 file photo, was shot and killed by an Afghan police officer on April 4. Peter Dejong/Associated Press AP photographer and 2007 Nieman Fellow Anja Niedringhaus was shot and killed April 4 by an Afghan police officer while covering the run-up to the elections.

Writing Questions Answered Anonymous asked: My mc has a crush on a guy who’s an adult film actor. I’ve written the first chapter but it seems like he’s just lusting after him. The Psychology of Writing and the Cognitive Science of the Perfect Daily Routine Reflecting on the ritualization of creativity, Bukowski famously scoffed that “air and light and time and space have nothing to do with.” Samuel Johnson similarly contended that “a man may write at any time, if he will set himself doggedly to it.” And yet some of history’s most successful and prolific writers were women and men of religious daily routines and odd creative rituals.

99 Problems Pick up a SIGNED copy of 99 PROBLEMS($5.99 for a limited time) lil-ye: “Who Gon Stop Me?” lil-ye: Vladimir Nabokov on Writing, Reading, and the Three Qualities a Great Storyteller Must Have by Maria Popova “Between the wolf in the tall grass and the wolf in the tall story there is a shimmering go-between. That go-between, that prism, is the art of literature.” “Often the object of a desire, when desire is transformed into hope, becomes more real than reality itself,” Umberto Eco observed in his magnificent atlas of imaginary places. Indeed, our capacity for self-delusion is one of the most inescapable fundamentals of the human condition, and nowhere do we engage it more willingly and more voraciously than in the art and artifice of storytelling.

- StumbleUpon WHY DID THE CHICKEN CROSS THE ROAD? Plato: For the greater good. Karl Marx: It was a historical inevitability. Machiavelli: So that its subjects will view it with admiration, as a chicken which has the daring and courage to boldly cross the road, but also with fear, for whom among them has the strength to contend with such a paragon of avian virtue? David Foster Wallace on Why You Should Use a Dictionary, How to Write a Great Opener, and the Measure of Good Writing By Maria Popova “Readers who want to become writers should read with a dictionary at hand,” Harvard psycholinguist Steven Pinker asserted in his indispensable guide to the art-science of beautiful writing, adding that writers who are “too lazy to crack open a dictionary” are “incurious about the logic and history of the English language” and doom themselves to having “a tin ear for its nuances of meaning and emphasis.” But the most ardent case for using a dictionary came more than a decade earlier from none other than David Foster Wallace.