Literary Theory and Schools of Criticism 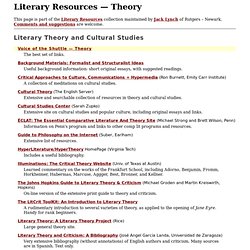 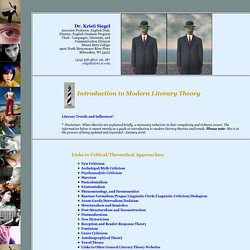 Psychoanalytic criticism may focus on the writer's psyche, the study of the creative process, the study of psychological types and principles present within works of literature, or the effects of literature upon its readers (Wellek and Warren, p. 81). In addition to Freud and Lacan, major figures include Shoshona Felman, Jane Gallop, Norman Holland, George Klein, Elizabeth Wright, Frederick Hoffman, and, Simon Lesser. Key Terms: Unconscious - the irrational part of the psyche unavailable to a person's consciousness except through dissociated acts or dreams. Freud's model of the psyche: Id - completely unconscious part of the psyche that serves as a storehouse of our desires, wishes, and fears.

Absurd - a term used to describe existence--a world without inherent meaning or truth. It's All an Allusion: Identifying Allusions, in Literature and in Life. Overview | What is an allusion? 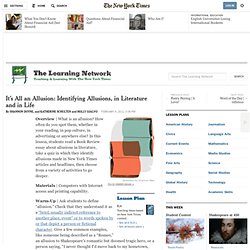 How often do you spot them, whether in your reading, in pop culture, in advertising or anywhere else? In this lesson, students read a Book Review essay about allusions in literature, take a quiz in which they identify allusions made in New York Times articles and headlines, then choose from a variety of activities to go deeper. Materials | Computers with Internet access and printing capability. Warm-Up | Ask students to define “allusion.” Check that they understand it as a “brief, usually indirect reference to another place, event” or to words spoken by or that depict a person or fictional character.

Then, lead a discussion about the pros and cons of making allusions. End by turning the tables on yourself and your colleagues, having students ask you to explain allusions to things that most in their peer group will understand immediately but might not be so clear to those being asked. Related | In the essay “Grand Allusion,” Elizabeth D. Related resources: “On Fairy-Stories” by J. R. R. Tolkien. Original location of this text Russian translation by V. 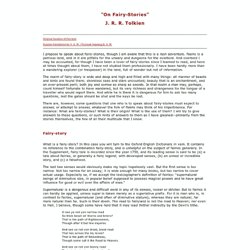 A. M. / Русский перевод В. А. М. I propose to speak about fairy-stories, though I am aware that this is a rash adventure. What is Ecocriticism? Ecocriticism is the youngest of the revisionist movements that have swept the humanities over the past few decades. 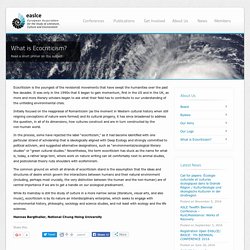 It was only in the 1990s that it began to gain momentum, first in the US and in the UK, as more and more literary scholars began to ask what their field has to contribute to our understanding of the unfolding environmental crisis. Initially focused on the reappraisal of Romanticism (as the moment in Western cultural history when still reigning conceptions of nature were formed) and its cultural progeny, it has since broadened to address the question, in all of its dimensions, how cultures construct and are in turn constructed by the non-human world. Carl Gustav Jung Explains His Groundbreaking Theories About Psychology in Rare Interview (1957)

Here’s an extraordinary film of the great Swiss psychologist Carl Gustav Jung speaking at length about some of his key contributions to psychology. 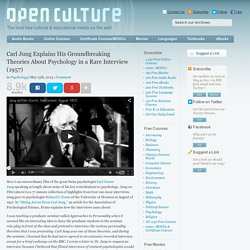 Jung on Film (above) is a 77-minute collection of highlights from four one-hour interviews Jung gave to psychologist Richard I. Evans of the University of Houston in August of 1957. In “Sitting Across From Carl Jung,” an article for the Association of Psychological Science, Evans explains how the interviews came about: I was teaching a graduate seminar called Approaches to Personality when it seemed like an interesting idea to have the graduate students in the seminar role-play in front of the class and pretend to interview the various personality theorists that I was presenting. Carl Jung was one of those theorists, and during the seminar, I learned that he had never agreed to an extensive recorded interview except for a brief exchange on the BBC. 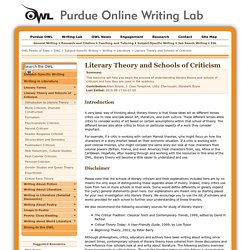 Contributors:Allen Brizee, J. Case Tompkins, Libby Chernouski, Elizabeth BoyleLast Edited: 2015-08-17 03:07:05 Introduction A very basic way of thinking about literary theory is that these ideas act as different lenses critics use to view and talk about art, literature, and even culture. For example, if a critic is working with certain Marxist theories, s/he might focus on how the characters in a story interact based on their economic situation. Disclaimer Please note that the schools of literary criticism and their explanations included here are by no means the only ways of distinguishing these separate areas of theory.