Where to find information - World War One 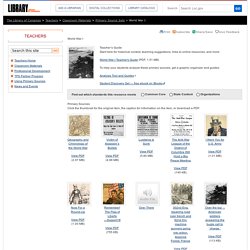 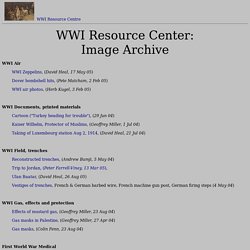 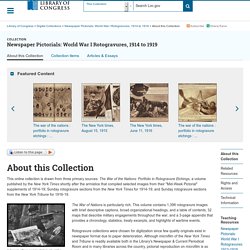 The War of Nations is particularly rich. This volume contains 1,398 rotogravure images with brief descriptive captions, broad organizational headings, and a table of contents; 32 maps that describe military engagements throughout the war; and a 3-page appendix that provides a chronology, statistics, treaty excerpts, and highlights of wartime events. Rotogravure collections were chosen for digitization since few quality originals exist in newspaper format due to paper deterioration. World War I Document Archive. Stars and Stripes: The American Soldiers' Newspaper of World War I, 1918-1919 - Library of Congress. This online collection includes the complete seventy-one-week run of The Stars and Stripes World War I edition. 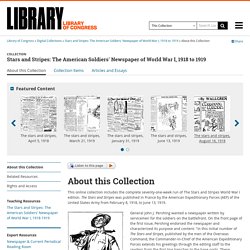 The Stars and Stripes was published in France by the American Expeditionary Forces (AEF) of the United States Army from February 8, 1918, to June 13, 1919. General John J. Pershing wanted a newspaper written by servicemen for the soldiers on the battlefront. The Great War of 1914-1919. Wars are primarily about fighting and killing, but it would be a great oversimplification to state that that is all they are about. 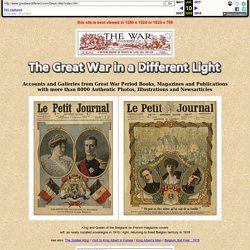 Quarrels between nations and groups of people do indeed produce misery and suffering for all those willingly or unwillingly involved, but thankfully there is much more to study and learn about the great conflicts of our time than merely the violence and destruction they caused. Wars can set about vast changes in society, be switching points in history, can be begetters of social movements and the origin of future problems. They are also prime movers in bringing about innovation and new and different ways of doing things and of organizing society.

African Americans and World War I. World War I was a transformative moment in African-American history. 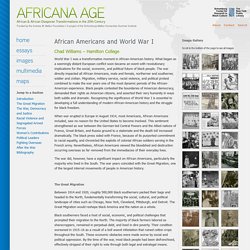 What began as a seemingly distant European conflict soon became an event with revolutionary implications for the social, economic, and political future of black people. The geography of the great war. Military Resources: World War I.  1914-1918-online. Languages and the First World War Languages and the First World War is a cross-disciplinary research project exploring change within languages and how languages influenced each other during a period of crisis and conflict. 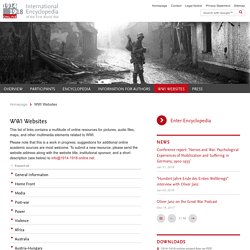 English Words in War-Time, Tracking Language on the Move in WW1 In a series of blogs, the ‘English Words in War-Time’ project tracks a detailed and largely unexamined record of language by Andrew Clark on the Home Front, and the reporting of war in a critical period of social and historical change. Art. WORLDWAR1.com - World War I / The Great War / 1914-1918. Over Here: WWI and the Fight for the American Mind. 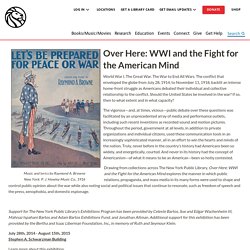 The Great War. The War to End All Wars. The conflict that enveloped the globe from July 28, 1914, to November 11, 1918, backlit an intense home-front struggle as Americans debated their individual and collective relationship to the conflict. Should the United States be involved in the war? If so, then to what extent and in what capacity?

The vigorous—and, at times, vicious—public debate over these questions was facilitated by an unprecedented array of media and performance outlets, including such recent inventions as recorded sound and motion pictures. The Great War: 80 years on. Monday, November 2, 1998 Published at 14:42 GMT The Great War: 80 years on It is 80 years since the armistice silenced the guns of World War I. 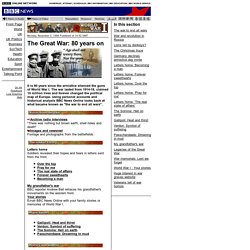 The war lasted from 1914-18, claimed 10 million lives and forever changed the political map of Europe. Using personal accounts and historical analysis BBC News Online looks back at what became known as "the war to end all wars". Archive radio interviews "There was nothing but brown earth, shell holes and death" Images and newsreelFootage and photographs from the battlefields. Letters home Soldiers revealed their hopes and fears in letters sent from the front. My grandfather's warBBC reporter Andrew Bell retraces his grandfather's movements on the western front.Your stories Email BBC News Online with your family stories or memories of World War I. Back to top | BBC News Home | BBC Homepage | © A Multimedia History of World War One.

World War One. Supported by over 500 historical sources from across Europe, this resource examines key themes in the history of World War One. Explore a wealth of original source material, over 50 newly-commissioned articles written by historians, teachers' notes and more to discover how war affected people on different sides of the conflict.