The Cascade of Errors That Led to the U.S. Airstrike on an Afghan Hospital. Here are some of the findings from a military investigation. 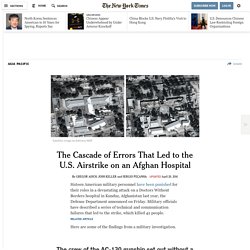 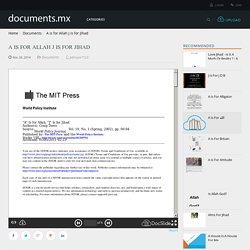 Accessed: 01/05/2011 02:23 Your use of the JSTOR archive indicates your acceptance of JSTOR's Terms and Conditions of Use, available at . From U.S., the ABC's of Jihad. In the twilight of the Cold War, the United States spent millions of dollars to supply Afghan schoolchildren with textbooks filled with violent images and militant Islamic teachings, part of covert attempts to spur resistance to the Soviet occupation. 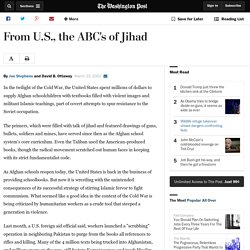 The primers, which were filled with talk of jihad and featured drawings of guns, bullets, soldiers and mines, have served since then as the Afghan school system's core curriculum. Even the Taliban used the American-produced books, though the radical movement scratched out human faces in keeping with its strict fundamentalist code. As Afghan schools reopen today, the United States is back in the business of providing schoolbooks. Afghan drone campaign said to kill fraction of intended targets. A joint U.S. military and intelligence campaign in northeastern Afghanistan that relied on drones to kill leaders of Al Qaeda, the Taliban and other groups mostly killed other unintended targets, according to a Thursday report by The Intercept. 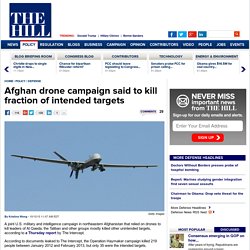 According to documents leaked to The Intercept, the Operation Haymaker campaign killed 219 people between January 2012 and February 2013, but only 35 were the intended targets. U.S. Soldiers Told to Ignore Sexual Abuse of Boys by Afghan Allies. Photo KABUL, Afghanistan — In his last phone call home, Lance Cpl.

Gregory Buckley Jr. told his father what was troubling him: From his bunk in southern Afghanistan, he could hear Afghan police officers sexually abusing boys they had brought to the base. “At night we can hear them screaming, but we’re not allowed to do anything about it,” the Marine’s father, Gregory Buckley Sr., recalled his son telling him before he was shot to death at the base in 2012. He urged his son to tell his superiors. “My son said that his officers told him to look the other way because it’s their culture.” 12 Years Later, a Mystery of Chemical Exposure in Iraq Clears Slightly. Photo The toxic vapors acted quickly against the Second Platoon of the 811th Ordnance Company, whose soldiers were moving abandoned barrels out of an Iraqi Republican Guard warehouse in 2003. 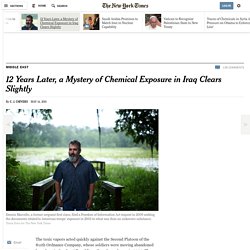 The building, one soldier said, was littered with dead birds. U.S. troops have stolen tens of millions in Iraq and Afghanistan: Center for Public Integrity investigates military personnel who bribed and rigged contracts for personal profit. Photo by Carlos Barria/Reuters U.S. 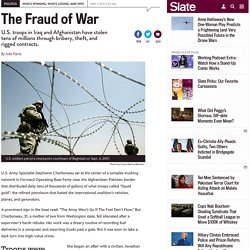 Army Specialist Stephanie Charboneau sat at the center of a complex trucking network in Forward Operating Base Fenty near the Afghanistan-Pakistan border that distributed daily tens of thousands of gallons of what troops called “liquid gold”: the refined petroleum that fueled the international coalition’s vehicles, planes, and generators. A prominent sign in the base read: “The Army Won’t Go If The Fuel Don’t Flow.” But Charboneau, 31, a mother of two from Washington state, felt alienated after a supervisor’s harsh rebuke. CIA organised fake vaccination drive to get Osama bin Laden's family DNA. The CIA organised a fake vaccination programme in the town where it believed Osama bin Laden was hiding in an elaborate attempt to obtain DNA from the fugitive al-Qaida leader's family, a Guardian investigation has found. 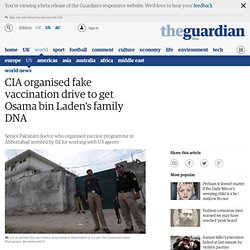 As part of extensive preparations for the raid that killed Bin Laden in May, CIA agents recruited a senior Pakistani doctor to organise the vaccine drive in Abbottabad, even starting the "project" in a poorer part of town to make it look more authentic, according to Pakistani and US officials and local residents. The doctor, Shakil Afridi, has since been arrested by the Inter-Services Intelligence agency (ISI) for co-operating with American intelligence agents. Relations between Washington and Islamabad, already severely strained by the Bin Laden operation, have deteriorated considerably since then. The doctor's arrest has exacerbated these tensions. Afghans demand arrest of US troops over killings. KABUL, Afghanistan (AP) — Hundreds of Afghans blocked a major highway south of Kabul on Tuesday, carrying freshly dug-up bodies they claimed were victims of torture by U.S. special forces and demanding the Americans be arrested, officials said. 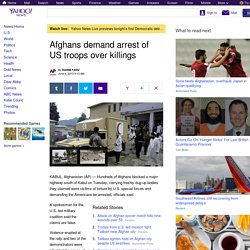 A spokesman for the U.S. -led military coalition said the claims are false. Violence erupted at the rally and two of the demonstrators were killed but the cause of their deaths was unclear, said Mohammand Hussain Fahimi, a provincial council member in Wardak, 45 kilometers (27 miles) south of Kabul. The three bodies were dug up earlier on Tuesday morning near a former U.S. special forces base in Nirkh district, according to Attaullah Khogyanai, the provincial governor's spokesman. Peek at the Ruling Elite's Letter of Recommendation for John Brennan - Conor Friedersdorf. Former colleagues have penned a glowing tribute from lofty perches in business, law, and academia. 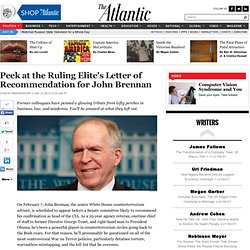 You'll be amazed at what they left out. Reuters On February 7, John Brennan, the senior White House counterterrorism adviser, is scheduled to appear before a Senate committee likely to recommend his confirmation as head of the CIA. As a 25-year agency veteran, onetime chief of staff to former Director George Tenet, and right-hand man to President Obama, he's been a powerful player in counterterrorism circles going back to the Bush years. Drone attacks in Pakistan mapped. Turn autoplay off Edition: <span><a href=" Sign in Beta About us Today's paper. Afghanistan shootings further complicate U.S. mission. KABUL – Throughout Afghanistan, people are struggling with how to deal with allegations against an American soldier accused of leaving his base and killing 16 people Sunday.

U.S. Drone Strikes Are Said to Target Rescuers. Blackwater Prosecution Resurrected By Appeals Court. WASHINGTON — An appeals court on Friday resurrected the case against four Blackwater Worldwide guards involved in a 2007 shooting in a Baghdad public square that killed 17 Iraqi citizens. A federal trial judge in Washington, Ricardo Urbina, threw out the case on New Year's Eve 2009 after he found the Justice Department mishandled evidence and violated the guards' constitutional rights. But a three-judge panel of the U.S. Court of Appeals ruled Friday that Urbina wrongly interpreted the law. It ordered that he reconsider whether there was any tainted evidence against four of the five defendants _former Marines Evan Liberty of Rochester, N.H.; Donald Ball of West Valley City, Utah; and Dustin Heard of Knoxville, Tenn.; and Army veteran Paul Slough from Keller, Texas. The Justice Department has dismissed charges against the fifth defendant, Nick Slatten, a former U.S.

Pixelating the Casualties in Iraq. Bush vs. Manning. Rolling Stone Politics. US Soldier Sentenced to 24 Years in Prison in Afghan Murder Case. A U.S. soldier accused of being part of a squad that deliberately killed Afghan civilians pleaded guilty to murder and other charges Wednesday and was sentenced to 24 years in prison. During a court martial in the state of Washington, military judge Lieutenant Colonel Kwasi Hawks said he intended to sentence 22-year-old Army Specialist Jeremy Morlock to life in prison with possibility of parole but was bound by the plea deal. The Afghan War is Brutal, Expensive, Unpopular, and Ineffective – So Why Are We Spending Billions on It? March 3, 2011 | The Liberty Underground: What is Really Happening in Iraq (Graphic Images) Defector admits to WMD lies that triggered Iraq war. US military support increases terror attacks on American citizens study shows - 02 - 2011 - News archive - News - News and media.

US military support for foreign governments encourages terrorist groups to attack Americans, demonstrates a new study from the London School of Economics and Political Science and the University of Essex. Terrorist attacks on Americans are more likely to come from countries where the US provides military aid, stations troops and sells arms finds the study - the first to show a statistical correlation between American foreign policy and terrorism against its citizens. The paper, 'Foreign terror on Americans', is published in the new edition of the Journal of Peace Research and explores the systematic patterns which appear to govern terrorist action.

The authors are professor Eric Neumayer, from LSE, and professor Thomas Plümper, from the University of Essex. U.S. Aims To Lure Insurgents With 'Bait' - washingtonpost.com. US forced to import bullets from Israel as troops use 250,000 for every rebel killed - World news, News. Suicide Soldiers: The Grim Math of How we Got Here. Wikileaks Shows Rumsfeld and Casey Lied about the Iraq War.

Fair Game. » What an 18 year old can and can’t do. Chomsky: US-led Afghan war, criminal. Why the Oregon Guard was ordered to 'Just Walk Away' Homeowners Wrongfully Foreclosed Upon Go Through Legal Wringer.