Psychology of Color: The meaning behind what we see 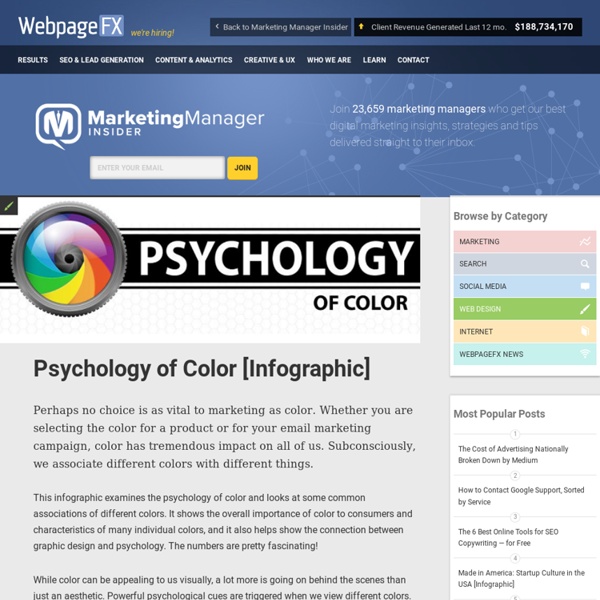 Perhaps no choice is as vital to marketing as color. Whether you are selecting the color for a product or for your email marketing campaign, color has tremendous impact on all of us. Subconsciously, we associate different colors with different things. This infographic examines the psychology of color and looks at some common associations of different colors. It shows the overall importance of color to consumers and characteristics of many individual colors, and it also helps show the connection between graphic design and psychology. The numbers are pretty fascinating! While color can be appealing to us visually, a lot more is going on behind the scenes than just an aesthetic. Embed This Graphic On Your Site <img src=” alt=”Psychology of Color Infographic” />Infographic by <a title=”WebpageFX” href=” Embed the Psychology of Color Infographic The psychology of color directly plays into consumer behavior. Marketing with Color Psychology What colors should you use in your marketing?

Want to Look Powerful or Sexy? The Red Effect Says You Should Wear Red Red Effect: Women appear more attractive to men when wearing red over other colors. This is true even if the clothing isn’t sexily-cut or a dress. What color is your “power tie”? If it’s red, you’re in good shape (if you want to appear dominant, powerful, and authoritative, that is). And for women? 30 Bizarre and Creative Packaging Design Examples Inspiration November 1, 2010 One of the things that identifies the image of a product is its packaging. Few elements like striking graphics, attractive colors, and unusual shapes are carefully thought of to come up with packaging design that catches the attention of the consumers. A packaging design is a critical component in marketing because it is the packaging that makes it stand from the rest when consumers choose a product from the shelf. We usually see the packaging first instead of an innovative product.

lapse: Landsat Satellite Images of Climate Change, via Google Earth Engine TIME and Space | By Jeffrey Kluger Spacecraft and telescopes are not built by people interested in what’s going on at home. Rockets fly in one direction: up. Telescopes point in one direction: out. Of all the cosmic bodies studied in the long history of astronomy and space travel, the one that got the least attention was the one that ought to matter most to us—Earth. That changed when NASA created the Landsat program, a series of satellites that would perpetually orbit our planet, looking not out but down. Colors of the Social World (Wide Web) [Infographic + Video] by COLOURlovers When a social network like Twitter allows a user to select a theme to represent themselves in the digital world, that user is choosing to identify their digital persona with colors... And we wanted to look at who chooses what colors... If the world is made up of people and those people have a color preference... what then is the color of Texas? What color are mothers? What color are we?

The 15 Craziest Things In Nature You Won't Believe Actually Exist Mother Nature is beautiful and amazing because we can see many amazing stuff like these 15 things that you won’t believe they actually exist. All these places are real. It is hard to believe in that, but that is true. 1. Volcanic lightning aka “dirty thunderstorms.” 2. Our First FREE EBook: Click it with Feeling 20inShare The concept for this book actually began late in 2009 when I began looking at the psychology behind why someone would want to naturally give someone else on the Internet a citation, or link, to their website. At that time I wrote a post on SearchEngineJournal.com entitled “The Psychology Behind Link Giving.” During my research for the piece I was introduced to the work of a psychologist named Robert Plutchik. His work on emotional response outlines all behavior, but for me really explained the core concept behind the idea why certain content goes viral online and other content goes unseen. Robert Plutchik, a psychologist and professor of psychology, focused his work on the topic of emotions.

Fluid simulation with Turing patterns Fps: Fluid simulation with Turing patterns (sort of) This demo is built on the Reaction-Diffusion template from the WebGL playground and Evgeny Demidov's fluid simulation. Anyway, this implementation does not use the OpenGL extension OES_TEXTURE_FLOAT. Instead a 16bit "minifloat" buffer is used here.The extension might still be a good start for optimization!To be correct these aren't real "Turing patterns", though the dots are quite characteristic. What you see is actually the simpler kind of one-component Reaction-Diffusion equations.

30+ Very Useful Color Tools For Designers Choosing the right colors and color combination for your web or print design is crucial when trying to invoke a certain feel, reaction or emotion from your viewers. In this post I have assembled an amazing collection of color selectors / color combination tools to make the selection process a little easier when trying to figure out what colors to use in your next design. All these tools are unique in their own way, so find the one that is right for your design needs and good luck with that next big project.

21 Most Beautiful Nature Photos On Stumbleupon These are the 21 most beautiful nature photos on Stumbleupon. Stumbleupon is big society where you can spend all your day and all you life with smile on your face. On that site you can find lots of things, like photos, animals, home stuff and many more, nature photos like these one below. These nature photos are really beautiful and very amazing and that is the proof just how much our Earth is beautiful place.