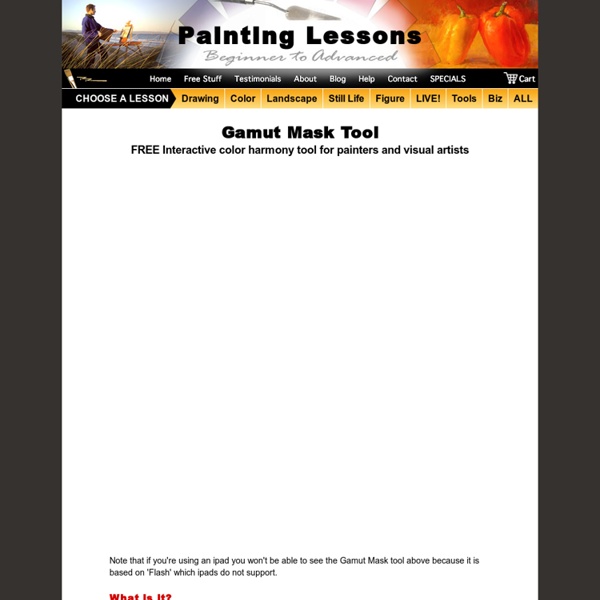 The Gamut Mask is a great way to created harmonic color schemes. It simplifies your color choices and saves you lots of time and paint in achieving unified color palettes quickly and easily. This Gamut Mask Tool was developed by me (Richard Robinson) and is provided to you free to use. The original concept of the Gamut Mask was developed by James Gurney (www.jamesgurney.com), artist and author of the fantastically illustrated Dinotopia books (www.dinotopia.com). Below are some samples of harmonic color schemes achieved by using the Gamut Mask. Related:  Digital Paint • PAGINAS DE PLASTICA

Neil Cicierega Tumblr. | Here is a very simple little app I wrote in... Here is a very simple little app I wrote in AutoHotkey for Windows to help productivity. The artists I’ve attempted to give this to were horrified and sickened by the idea of it. It floats in the corner of your screen. This way, you have a constant peripheral reminder of how little of your day has actually been spent on important things like “doing what you’re supposed to” and “not having fun.” Download it here: If you don’t trust me, you can also download the script, personally confirm that it won’t destroy anything other than your sense of self-worth, and compile it yourself with AutoHotkey. 1. 2. 3. 4. 5. 6. There are a couple other options on the Menu button, and if you really want to get fancy, you can change the colors by editing the .ini file. Thanks! If you are a person who knows how program good send me a message if I programmed bad.

PLáSTICAMENTE Best Scanner for Artwork: A Comparison I remember there used to be many brands of scanner but nowadays it seems the choice comes down to two main ones, Epson and Canon. Epson scanners get mentioned more often than Canon. This is probably due to the fact that Epson has a great reputation at producing photo scanners. Since I don't have all the scanners, I've asked a few friends Erwin, Don and Whee Teck to contribute their scans for comparison. Some scanners are good at one thing and not the other. Factors Some common factors to consider would be the speed, software, usability, colour depth, accuracy, size of the scanning surface and resolution Speed is important for those who needs to scan frequently, e.g. sketchers, those who work in the office with other co-workers. Software and usability would be the scanning software included and whether you can make adjustments to how visual attributes. Colour depth is important because you want to be able to scan the widest colour range possible. Comparison Canon LiDE220 A4 scanner LiDE220.

itchy animation - quirky illustration and characters by Richard Yot LIGHT - a detailed tutorial Throughout this article I will be using a diagram of a white ball on white card to demonstrate how light behaves in different everyday situations: Here it illustrates a sunny afternoon. The main source of light is the sun, whilst the blue sky supplies a second source of light with very different characteristics. Some light is also bouncing between the white base and the ball and supplies a third source of light. The brightest light is coming from the sun and is white light emanating from a small source, which causes it to cast sharp edged shadows. The light coming from the blue sky has a very strong colour cast which affects everything in this scene. Finally the light that is reflected between the card and the ball is also predominantly blue (even though the card and ball are white) since it is blue skylight that is being reflected by the white objects. Why is the terminator the darkest area on the ball? Why is the light from the sky blue? Light bounces High key

firealpaca tutorials and brushes a small guide by me, because I get asked a lotQ: Why are both of these programs mentioned in the same breath all the time?Because FireAlpaca came to the scene first, and is the older twin. :U MedibangPaint Pro was originally named “CloudAlpaca” before the fork was acquired by the Japanese site, Medibang!Q: So if they’re derived from the same software, what’s the difference? FireAlpaca is great for drawing and illustration, and as of recent updates, has an animation feature! [FireAlpaca] [Medibang Paint]Also, if you want to look up help, resources, and tutorials, be sure to check out these links!

PSG Art tutorial Foreword I believe there is logic behind why a picture works or not. I also believe that humans are meat machines, and that one day computers will be able to emulate humans and what we do. Since logic can be formulated into rules, guidelines and theories, these can be shared. I will attempt to do so here. Note that I have just empirically deduced the theories I present here, and that I'm a highly fallible meat machine. Many rules also play against each other and may cancel each other out, or become invalidated because of a stylistic approach . The far most useful critique I can give developing artist is: Practice. Updates 2012 May02: Clarified stuff in the Terminology section. Table of contents Licence This tutorial is, in its current form, free to translate and 'mirror' in that form. Because I may be updating it and new versions are generally better, I'd rather not have it mirrored too much. I guess this licence comes pretty close: Terminology (Upd. 2012) Seeing (Upd. 2012) Light stuff Exposure