Meaning of Colors in Color Psychology 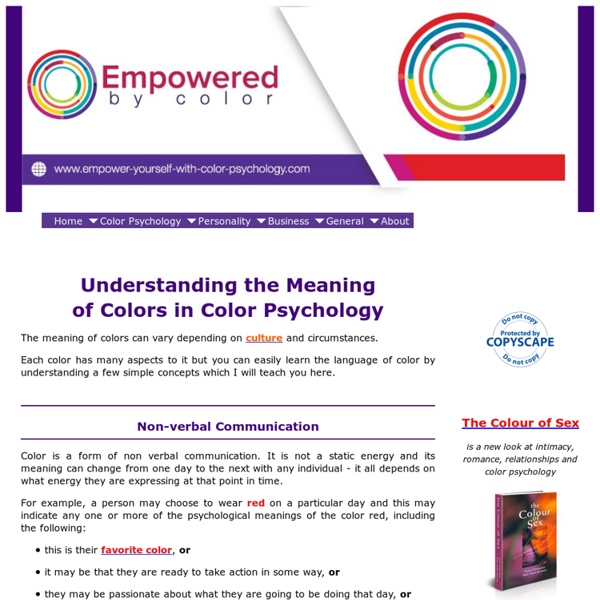 The meaning of colors can vary depending on culture and circumstances. Each color has many aspects to it but you can easily learn the language of color by understanding a few simple concepts which I will teach you here. Non-verbal Communication Color is a form of non verbal communication. For example, a person may choose to wear red on a particular day and this may indicate any one or more of the psychological meanings of the color red, including the following: this is their favorite color, orit may be that they are ready to take action in some way, orthey may be passionate about what they are going to be doing that day, orit may mean that they are feeling angry that day, on either a conscious or subconscious level. All are among the traits of the color red. The Meaning of Colors Red is the color of energy, passion, action, ambition and determination. For more on the meaning of colors for the color red Orange is the color of social communication and optimism. For more on the color orange

What Is Color and How Do We Use Them? When we consider what is color, we invariably go back to the explanation first given by Sir Isaac Newton in 1666. Color is a part of the electromagnetic spectrum and has always been so. Color is immediate: it conveys emotions and, to many people, it helps make decisions. Ask some people what is color and chances are you will get the answer: color is memorable and emotional. What is color? To understand what color is, let us consider how Newton studied the concept. Thus, it is now known that when we consider what is color, we get the answer that light is the only source of color. We thus cannot consider ‘what is color’ without considering three other factors: Light – the main source of colorThe object – its material and its reaction to colorThe eye – the perceiver of color To define what is color, we can say that it is powerful medium that can motivate, persuade and inspire. How do we use colors? Colors bring about an emotional response in each of us. In conclusion What is color?

Color Meanings - Learn about Colors and Symbolism Color Wheel Pro: Color Meaning Red Red is the color of fire and blood, so it is associated with energy, war, danger, strength, power, determination as well as passion, desire, and love. Red is a very emotionally intense color. Red brings text and images to the foreground. Light red represents joy, sexuality, passion, sensitivity, and love. Orange Orange combines the energy of red and the happiness of yellow. To the human eye, orange is a very hot color, so it gives the sensation of heat. Orange has very high visibility, so you can use it to catch attention and highlight the most important elements of your design. Dark orange can mean deceit and distrust. Yellow Yellow is the color of sunshine. Yellow produces a warming effect, arouses cheerfulness, stimulates mental activity, and generates muscle energy. Use yellow to evoke pleasant, cheerful feelings. Dull (dingy) yellow represents caution, decay, sickness, and jealousy. Green Green is the color of nature. Green has great healing power. Blue Purple White Black

Color Theory for Designers, Part 1: The Meaning of Color Let’s dive into color theory. We’ll discuss the meanings behind the different color families, and give some examples of how these colors are used. There are few things in design that are more subjective—or more important—than the use of color. A color that can evoke one reaction in one person may evoke the opposite reaction in another, due to culture, prior association, or even just personal preference. Color theory is a science and art unto itself, which some build entire careers on, as color consultants or sometimes brand consultants. There’s a lot to it, though. This is the first in a three–part series on color theory. More after jump! Warm Colors Warm colors include red, orange, and yellow, and variations of those three colors. Red and yellow are both primary colors, with orange falling in the middle (making it a secondary color), which means warm colors are all truly warm and aren’t created by combining a warm color with a cool color. Red (Primary Color) Red is a very hot color. Gray

milkwithonesugar FontBase — A blazing fast, beautiful and free font manager for designers. Mockup World | The best free Mockups from the Web Anton & Irene Denise Gonzales Crisp: The decorational For Denise Gonzales Crisp, typography has the deepest tradition of the decorative within graphic design Denise Gonzales Crisp was in Mexico City when she was asked to design a poster (the Artcity 2005 poster El Otro Lado) for a Canadian arts festival with the theme of ‘trans’. She turned to the decorative expressions that surrounded her and, in order to convey the idea of being transient, focused on the details that she thought wouldn’t matter to anyone in Mexico – ‘things that were not placed, like trash, a thing on the ground, raw materials.’ Close by her hotel in that city was a bridge that had been decorated with carvings by transients and locals. Superimposed on the frame are drawn letters, created in Illustrator, which are rooted in Tuscan letterforms and inspired both by Art Nouveau wrought iron work and by the ‘fancy lettering’ and painted signs Gonzales Crisp encountered in Mexico. Gonzales Crisp points out that vector-based technology is key to contemporary pattern making.

We asked 7 product designers how they avoid creative burnout If you’ve ever felt like the days are on a repeating loop, or that your creative spark plugs have gone dead, rest assured—you’re not alone, nor is the problem a new one. The human brain only has so much bandwidth for the kind of focused, nimble thinking and collaborative engagement that design projects require before it tunes out or switches modes. Michelangelo got so famously burned out painting the ceiling of the Sistine Chapel (a commission he desperately didn’t want in the first place, but who says no to a Pope?) So how do designers keep from “dulling the knife” when they’re working on the same project day after day? Look for opportunities to work remotelyAndrew Cullen, Director of Product Design at InVision “We’re very fortunate that working for a fully distributed company gives us a head start in nailing the work-life balance. “Creativity is fed by understanding problems deeply.” Ed Fairman Related: Read the Design Systems Handbook Elyse Bonner Jess Brown The GoDaddy design team

The Sound of Graphic Design: Amsterdam's Lyanne Tonk and her Synaesthesia Thinking When describing graphic design we often talk of “silence” when there’s plenty of white space, or we say that something has a “loud” aesthetic. We like to hear colors; we enjoy still graphics that seem to vibrate and pulsate with noise. For the Amsterdam-based graphic designer Lyanne Tonk, who currently balances working part-time at the “young and a bit rebellious” Netherlands publisher Das Mag with freelance projects, a sound or lack thereof not only charges a composition but can spark the process behind making one. For certain (relevant) projects, she begins with what she hears. Let’s start with the sound of nothing at all, which is where Tonk’s interest in the visual aesthetics of noise first originated. As Massimo and Lela Vignelli once wrote, great graphic designers “have used white space as the significant silence to better hear their message loud and clear.” “For my research I looked at the inauguration speech of Barack Obama, because he’s such a good public speaker.

Maximilian Mauracher Weaves Monochrome Magic from Creative Restriction There are three things that strike you when you take a look at the portfolio of Berlin-based graphic designer and art director Maximilian Mauracher: firstly, his beautiful work; secondly, “wow, this guy really loves monochrome”; and thirdly, that his personal logo is surely a nod to a certain clown called Ronald’s famous golden arches. The similarity is no accident, and it points towards Mauracher’s playful and wry sense of humor, one that imbues much of his portfolio when that sort of thing is appropriate. It’s baffling (and impressive) to see his work in light of the fact that he only graduated from the University of Applied Arts in Vienna in June this year, and on creating his new website after graduation, he found himself thinking about how other graphic designers or illustrators craft their own logos. “They create these random things from their initials which look nice, but aren’t really saying anything,” says Mauracher.