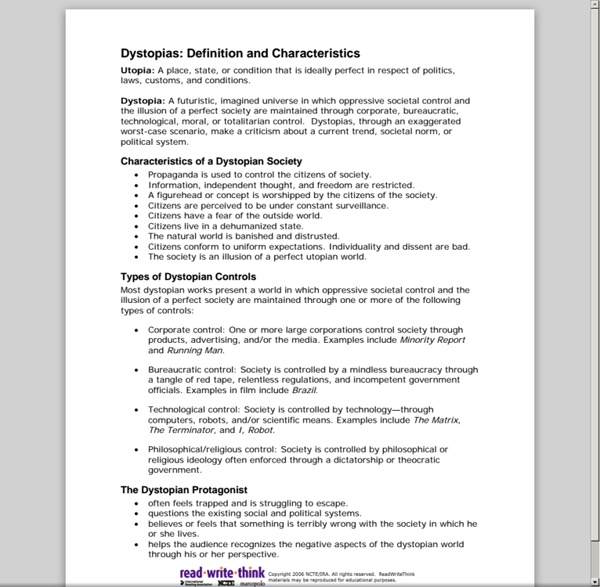 1984 - Download Free eBook The thing that he was about to do was to open a diary. This was not illegal (nothing was illegal, since there were no longer any laws), but if detected it was reasonably certain that it would be punished by death, or at least by twenty-five years in a forced-labour camp. Winston fitted a nib into the penholder and sucked it to get the grease off. The pen was an archaic instrument, seldom used even for signatures, and he had procured one, furtively and with some difficulty, simply because of a feeling that the beautiful creamy paper deserved to be written on with a real nib instead of being scratched with an ink-pencil. April 4th, 1984. He sat back. For whom, it suddenly occurred to him to wonder, was he writing this diary? For some time he sat gazing stupidly at the paper.

Dystopian Lit : Intro materials 6 News Stories to Connect to Orwell’s 1984 Big brother really is watching you. Today we accept a certain amount of oversight by government and business as a part of daily life. Students know about all the surveillance cameras that follow them as they move about in the world. Still, they can bring a skepticism to class when they read George Orwell’s 1984. Several recent news stories may make the answer to that question less certain. Someone’s watching Granny cook her eggs. Student discussion of the articles can be guided with these questions: What freedoms or privacy rights does the system affect? If students read and discuss several of the articles, additional questions can ask them to compare and synthesize the pieces: Notice that the targets of these programs are either students or senior citizens. Note that these articles would also make a great supplement to M. [Creative Commons licensed Flickr photo by anarchosyn]

The Future Sucks – A Visitor’s Guide to Dystopia photo © 2010 James Vaughan | more info (via: Wylio) We are in the midst of a dystopia revolution, and it is changing the landscape of YA literature. Suddenly sci-fi — the ancestral purview of nerds and geeks everywhere — is cool again, or at least mainstream. Even the writers of â€œseriousâ€ magazines like The New Yorker are writing about young adult dystopia books! What gives? Keeping in mind that these days there is an ever-present danger that you will open a seemingly innocent book and be whisked away into a dangerous and unpleasant future, we present to you, for your own safety, a visitor’s guide to the various types of dystopia. Dystopia Type 1 = ShinyHappyLand At first glance, the world around you seems like a nice enough place. The Type 1 Dystopia expresses deep skepticism about â€œbread-and-circusesâ€ style capitalism that manipulates citizens by giving them everything they think they want, while stifling their ability to think for themselves. What to Do: Agree with everything.

Lesson Plan: Updating Orwell's '1984' Overview | How does George Orwell’s vision of technology and its uses in “1984” compare with today’s reality? How have concerns about privacy and freedom expressed in the novel been manifested in the contemporary world? In this lesson, students compare and contrast the world, people and technologies of “1984” with those of today and create a treatment for a modern film, print or stage adaptation that revolves around current technologies. Materials | Full text of “1984,” computers with Internet access, software for podcasting and projection equipment, copies of the handout “1984” vs. Today (PDF), video cameras and film-editing software (optional) Warm-Up | Give students the following list of words from “1984”: Big BrotherdoublethinkthoughtcrimeNewspeakmemory holeOrwellian Students who have read the novel will recognize their provenance and should define them, as well as give a contemporary example of something that could be described similarly. What does Mr. Related resources: Technology 3.

THE MACHINE STOPS ... E.M. Forster Imagine, if you can, a small room, hexagonal in shape, like the cell of a bee. It is lighted neither by window nor by lamp, yet it is filled with a soft radiance. There are no apertures for ventilation, yet the air is fresh. There are no musical instruments, and yet, at the moment that my meditation opens, this room is throbbing with melodious sounds. An armchair is in the centre, by its side a reading-desk-that is all the furniture. And in the armchair there sits a swaddled lump of flesh-a woman, about five feet high, with a face as white as a fungus. An electric bell rang. The woman touched a switch and the music was silent. "I suppose I must see who it is", she thought, and set her chair in motion. "Who is it?" But when she listened into the receiver, her white face wrinkled into smiles, and she said: "Very well. She touched the isolation knob, so that no one else could speak to her. "Be quick!" "Kuno, how slow you are." He smiled gravely. "I really believe you enjoy dawdling." "Well?"