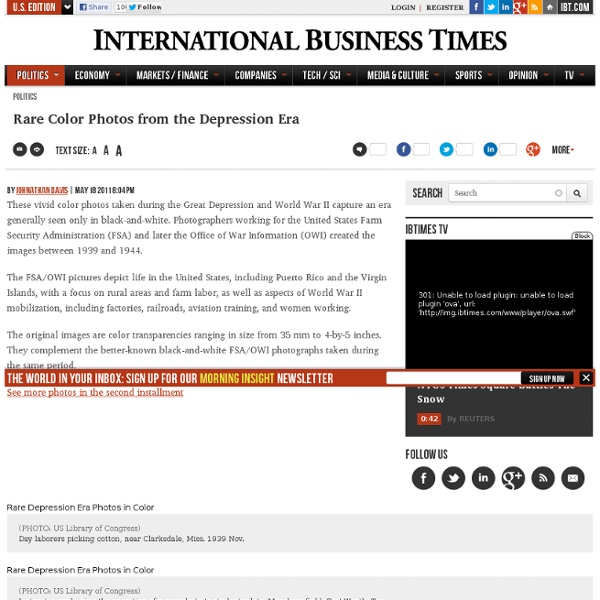 These vivid color photos taken during the Great Depression and World War II capture an era generally seen only in black-and-white. Photographers working for the United States Farm Security Administration (FSA) and later the Office of War Information (OWI) created the images between 1939 and 1944. The FSA/OWI pictures depict life in the United States, including Puerto Rico and the Virgin Islands, with a focus on rural areas and farm labor, as well as aspects of World War II mobilization, including factories, railroads, aviation training, and women working. The original images are color transparencies ranging in size from 35 mm to 4-by-5 inches. They complement the better-known black-and-white FSA/OWI photographs taken during the same period. See more photos in the second installment

New York City photos by Charles W. Cushman reveal 1940s life in the Big Apple Photos by Indiana snapper Charles Weever Cushman in 1941 and 1942Expensive colour Kodachrome was used to take impressive collectionMany buildings have since been demolished but some of them still stand By Mark Duell Created: 14:08 GMT, 13 September 2011 It’s been 70 years since an Indiana photographer visited New York City and returned home with an amazing collection of holiday snaps.

The Best in Bird Photography: 50 Crystal Clear Bird Shots Bird photography is among the most popular types of nature photography. This is no surprise, considering the fact that they live all over the globe, they can be very colorful and come in different shapes and sizes. Immortalizing birds in photos can be quite challenging – specialized skills and equipment are required – but the outcome is definitely worth it all the effort and investment. Today’s 50 images showcase is dedicated to the ones that love nature, to the photographers that want to get inspired and learn more in this field of art, or simply to the ones that love beauty. maps home page Down to: 6th to 15th Centuries | 16th and 19th Centuries | 1901 to World War Two | 1946 to 21st Century The Ancient World ... index of places Aegean Region, to 300 BCE

Alex Prager continuing to look at West Coast photographers…. Alex Prager’s imagery can only be a product of growing up in Los Angeles and being surrounded by a culture of cinematic references and plastic surgery. Armed with a trunk load of wigs, false eyelashes, and Tippi Hedren inspired ensembles, Alex has created two bodies of work that are the love children of Alfred Hitchcock and Tina Louise in The Stepford Wives. Still life: Bent objects UPDATE: The Return of Bent Objects Wires transform these objects from inanimate to hilarious works of art. Little polish girl McDonalds as Sculpture Materials Yeah, this is where those come from Dancing Queens

Time Capsule To begin, enter a date in the box above and click either: Quick Page - this button will automatically generate a Time Capsule page for you. - OR - Advanced Page - this button will lead you through a "wizard" that allows you to select specific headlines, birthdays, songs, TV shows, toys, and books for the selected date. You can edit the information, or even add your own information to the final page! When you're through, you'll be presented with your own customized page that includes all the information you've chosen, plus typical consumer prices from that year, Academy Award winners that year, etc.

America in Color from 1939-1943 Posted Jul 26, 2010 Share This Gallery inShare324 These images, by photographers of the Farm Security Administration/Office of War Information, are some of the only color photographs taken of the effects of the Depression on America’s rural and small town populations. The photographs and captions are the property of the Library of Congress and were included in a 2006 exhibit Bound for Glory: America in Color. Faro and Doris Caudill, homesteaders. A Father Who Creatively Captures His Kids (20 photos) If there was a prize that could be given out to the most creative father, I'd hope that it was awarded to Jason Lee. A wedding photographer by day, he's used to capturing some of the most important moments in a couple's lives. As a longtime fan of Jason's photos on Flickr however, I think the real magic happens when he turns the camera onto his daughters. Sure, his children are adorably cute in their own right, but that's not what makes his photos so interesting. It's when he puts his own spin on their everyday moments that we not only get to experience our own childhood again, we're able to see a father's pride shine through. I was able to get in touch with Jason to ask him a few questions.

Early 1900s in Colour - All around the world All around the world - Franny Wentzel - Thursday, May 6th, 2010 : goo [previous] :: [next] In the early part of the 20th century French-Jewish capitalist Albert Kahn set about to collect a photographic record of the world, the images were held in an 'Archive of the Planet'. Before the 1929 stock market crash he was able to amass a collection of 180,000 metres of b/w film and more than 72,000 autochrome plates, the first industrial process for true colour photography

Stephen Shore Some work by Stephen Shore 'Ashland, Wisconsin, Jig-Saw Puzzle in Cabin #8, Beach Motel, July 9, 1973', 1973-2006 'Hamburger Steak Dinner, Redfield, SD, July 13, 1973', 1973-2007 'Room 110, Holiday Inn, Brainerd, MN, July 11, 1973', 1973-2007 The Lost America The Lost America America, One of the Most Powerful Continent in World as well as, the Most Modernized and Advanced Continent of Today. But somewhere in this Race we have Lost the America that it looked before. Racism shock therapy in diversity education: American Pictures! "American Pictures" - a tool against racism Racism in America, in Europe or universally: American Pictures is an audio-visual anti-racism program which in an effective, entertaining and moving way shows the ultimate cost of racial discrimination, segregation and ghettoization of ethnic minorities. Jacob Holdt's pictures of poverty, oppression, slavery and injustice in the black underclass are used widely for racial prejudice reduction and multicultural diversity training in universities, colleges and high schools, but are also excellent for sociology conventions and human rights seminars. Jacob Holdt's photography of despairing poor black ghettos and mind crippling child poverty as the end result of white supremacy and institutionalized inequality and injustice - not to speak of his shocking portrayal of extremist white hate groups, Ku Klux Klan and neo Nazis and even mass murderers - seems to belong in a distant history, but is made long after the civil rights struggle.