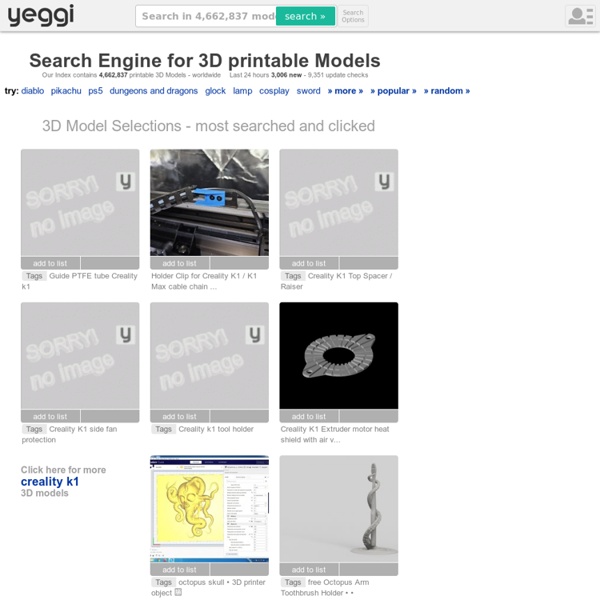 KSCAN 3D Scanning Software KSCAN 3D Scanning Software KSCAN 3D is a powerful and affordable 3D Scanning software. Used in conjunction with Microsoft Kinect or Asus Xtion sensors (not included), KSCAN enables the generation, merging, rendering and editing of complex 3D forms - including human bodies, furniture, small parts, you name it. When you're finished scanning and editing the mesh, you can export your 3D model into your preferred 3D modeling program. Low-Cost: KSCAN costs 10-20 x less than other 3D scanning solutions, even after including the sensor's cost (i.e. Kinect or Xtion). Planet Texture Map Collection I work in the field of advertising. One day I needed an image map of our planet for use in a rendering for a printed piece, and was suprised to discover that such a thing was pretty hard to find. So I created my own using scanned data, lots of painting, and reference to USGS digital elevation map data. Once I had completed both a bump and color map of the Earth, I turned to the other planets in our solar system, scavenging data where I could and piecing together the images I am sharing here.

This is how the Smithsonian made Obama's historic 3D printed bust Museums are replete with exquisite, lifelike busts of U.S. presidents and heads of state. Many were made when their subjects, such as George Washington and Ben Franklin, were still alive. Yet, for all their verisimilitude, they’re still artists’ interpretations of what these historical figures looked like. President Barack Obama’s bust, by contrast, is a kind of facsimile never seen before in a presidential representation. That’s because the latest presidential statue in Smithsonian’s Castle Commons gallery is the result of a 3D scan, the first of its kind of a U.S. president.

Blender Tutorial: Blender 3D printing tutorial This tutorial was made for Blender users with an interest in 3D printing. It covers the essential information for taking your 3D model and turning it into a 3D object using the free CAD software. Through this tutorial, you will learn some of the best practices for modeling, correcting and exporting a 3D file for 3D printing with Blender 2.7. Specifically this tutorial covers the following points: Blender is a free 3D modeling software which is optimized for 3D animation and rendering using polygonal modeling techniques. This tutorial is based off of version 2.7 of Blender - the most recent version of the software can be downloaded from the Blender website.

Download free STL file Schrodinky! British Shorthair Cat Sitting In A Box(single extrusion version) Your rating: 0/5 12.8k views 75 likes 1.8k downloads 3D model description A couple of weeks ago, I posted a very cute picture on Twitter of a British Shorthair kitten sitting in a flower pot and many people enjoyed it.

3D printing commentary Thingiverse user Dizingof, well known for intricate latices work designs, recently removed most of his designs from thingiverse in response to 3DSystems and Stratasys ignoring the non-commercial license associated with his things and using his designs to market their product. There are so many facets to this story I can't decide which one I want to talk about. For starters there's two huge companies ignoring licenses protecting a little guy because what's he going to do, sue them? High Resolution Textures Use of Texture in Design Posted by Matt Russell on Jul 4, 2013 in Textures | 9 comments Texture and design usually go hand in hand, but rather than focus on colour, we will focus our concentration on texture as a design principle – both aesthetically and psychologically. There are various forms of texture from the physical or actual texture such as that from a watercolor or an object made from leather to that of implied – for example...

25 Websites To Download Free STL Models For 3D Printers - Hongkiat 3D printers are going mainstream, as more consumers warm up to and adopt the idea of 3D printing. The Micro, for example, is a Kickstarter project for a 3D printer for consumers. It was funded in mere minutes. Blender 3D Modeling Software You can do 3D Open Source modelling and animation with Blender software. Blender 3D Modeling Software screenshot About Blender software Metric Thread Calculator Metric thread calculator to calculate external and internal metric thread dimensions including major diameter, minor diameter, pitch diameter and thread tolerance according to ISO 724 and ISO 965 standards. There are two calculation options available, general engineering use or custom use. In general engineering use, calculations can be done by selecting a standard metric thread size in a range from 1.6 mm (M1.6) to 64 mm (M64). Tolerance class can be selected among the alternatives 6e, 6f, 6g and 4h for bolts and 5H, 6H, 7H and 6G for nuts. 6g and 6H are default values and selected class for commercial external threads and internal threads in ISO 965-1:1998. The user shall use 6g for bolts and 6H for nuts unless there is a specific requirement to use other tolerance classes.

Ultimaking could learn from Leapfrog - Buying, Ordering and Delivery of Ultimaker - Official Ultimaker User Forum I joined their forum, as I have done this one ... in order to find out what support and feed back was going on. I do not currently own a 3D printer. I found nothing but one issue after another. (@ leapfrog) With regard to the creator model ... by memory ... one guy had to take to his machine with a grinder and cut a hole in it as the metal frame was touching the spool or interfering with the filament in some way ... something else about needing bearings. These issues have nothing to do with any type of learning curve. Genetica Texture Packs Genetica Texture Packs Home > Products > Texture Packs > Overview Genetica Texture Packs are high quality collections of royalty-free seamless textures. Textures are provided in a procedural format that can be fully edited in the powerful material studio Genetica, or rendered and converted into standard images using the free Genetica Viewer. Subscribe for More Free Textures Download To download entire texture packs all at once, click here.

Quick Start Guide: Printing With a Makerbot Rep 2: 14 Steps In order for your model to print correctly you will need to customize the settings. What type of material are you using? PLA or ABS - If you don't know check the label on the spool on the back of the Makerbot (There are pros and cons to each material, you have to choose which is best for your print) Resolution- Do you want it to be faster or prettier or a happy medium? This depends on what you will be using your printed object for. Meshmixer: 3D Modeling Software 3D Printing The MeshMixer software is a free product developed by AutodeskⓇ intended for easy creation of 3D mashups and remixes with specialized tools for 3D printing. The MeshMixer software includes many features that were previously not available combined in a single product that is also free. Some of the main features include: