Rauschenberg. Revision timetable. Annotations. Mol pics. Buck. Drawn to Life - Artist Kim Buck. Contemporary artist Kim Buck, who already has a number of sell-out shows under her belt, knows how turn a piece of burnt stick into a symphony of immaculately sculpted forms. 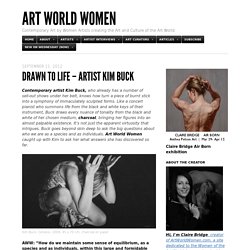 Like a concert pianist who summons life from the black and white keys of their instrument, Buck draws every nuance of tonality from the black and white of her chosen medium, charcoal, bringing her figures into an almost palpable existence. It’s not just the apparent virtuosity that intrigues. Buck goes beyond skin deep to ask the big questions about who we are as a species and as individuals.

Art World Women caught up with Kim to ask her what answers she has discovered so far. AWW: “How do we maintain some sense of equilibrium, as a species and as individuals, within this large and formidable universe?” KB: Oh gosh… straight to the heart of it! AWW: Your exhibition Landscapes at Jan Murphy Gallery in 2011, showed exquisitely detailed figures drawn in all manner of supine positions in stark light. 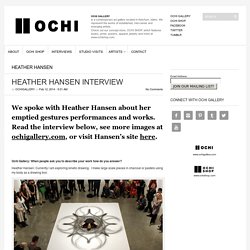 Heather Hansen: Currently I am exploring kinetic drawing. I make large scale pieces in charcoal or pastels using my body as a drawing tool. photo by Spencer Hansen at OCHI GALLERY Where do you see the intersection between dance and fine art in your work? For me personally there is no differentiation between the two. What first compelled you to create the emptied gestures? It’s the sort of thing that once it found its way into my consciousness it was already so familiar that I wondered what took me so long.

Playing in the sand on the beach a few years back, I had a moment when I looked back at my footprints and marks that I’d left from doing a few ballet movements and thought, wow I really want to sculpt that. Do you have an idea of the pattern you’re going to create before you pick up the charcoal, or does it happen moment to moment? What’s going through your mind as you create them? Not a lot. You’re kind of a nomad. Julianschnabel. Julian Schnabel. Julian Schnabel may be one of America's most famous living painters. 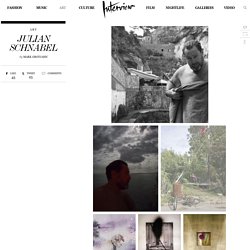 But in a strange but appropriate twist for a man whose body of work now spans five decades, his paintings are less instantly identifiable—they elude the instant iconic familiarity that turned many of his contemporaries rising in the '70s and '80s into visual brand names. This paradox may be explained by Schnabel's overwhelming success as a film director, helming such cinematic masterpieces as Before Night Falls (2000) and The Diving Bell and the Butterfly (2007), ever since he broke into movie-making with Basquiat, his 1996 biopic of his late friend, the artist Jean-Michel Basquiat. (In fact, Schnabel, along with his studio assistant Greg Bogin painted the works used in Basquiat to showcase the young artist's feral spirit). Triumph in cinema is seemingly always destined to eclipse development in the more rarefied circles of visual art. MARK GROTJAHN: Hi, Julian. GROTJAHN: How old would Picabia be? 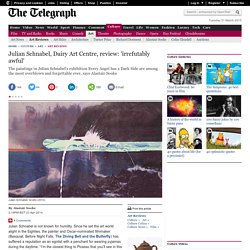 Since he set the art world alight in the Eighties, the painter and Oscar-nominated filmmaker (Basquiat, Before Night Falls, The Diving Bell and the Butterfly) has suffered a reputation as an egotist with a penchant for wearing pyjamas during the daytime. “I’m the closest thing to Picasso that you’ll see in this fucking life,” he once said. He later claimed that he was kidding, but, on some level, you suspect, he came to believe his own hype. Today he lives in a towering, pink, faux Italian palazzo, which he designed, in New York.

As a painter, Schnabel has always sparked controversy. The first large gallery at the Dairy Art Centre, founded by collectors Frank Cohen and Nicolai Frahm in a former milk depository, sets the tone. I suspect we are supposed to see him as a hero – preparing to grapple with his art as a whaler might struggle with a leviathan (the artist-whaler analogy is one that Schnabel has used in the past).