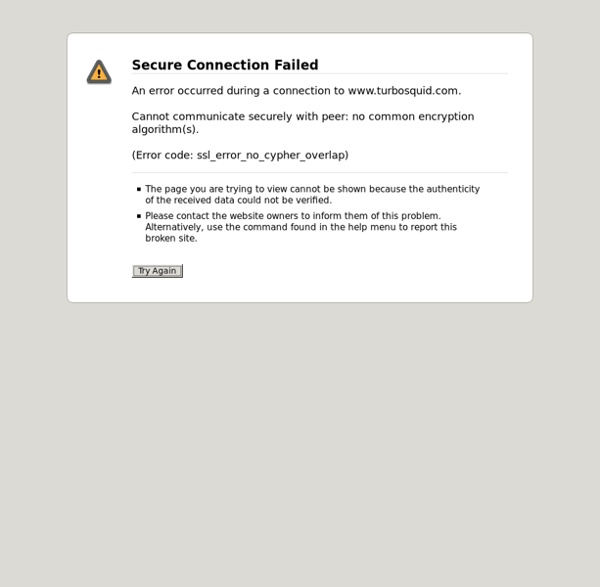 Search our stock catalog to get the 3D model you want. Join the world's top artists who use TurboSquid 3D models in advertising, news, architecture, broadcast, games, training, film, the web, and just for fun. TurboSquid was founded in 2000 to serve the 3D model industry. With over 300,000 3D models available for download, TurboSquid is the leading source for 3D models on the web. Search for 3D models by keyword, or browse 3D model categories.

sIBL Archive Installation Each thumbnail links directly to an archived sIBL-set. Watch out, these are big downloads. Jaw-Dropping Classroom 3D Printer Creations After the school day has ended at J.H. Rose High School, Rob Puckett and his two sons, Calder and Rylan, watch a nozzle in a white box extrude resin. It's a scene reminiscent of 1976, when neighbors would crowd around a family's microwave and stare at a hotdog cooking in under a minute. 3D Printed Mechanical Iris Dome All-One-Piece It’s that time of year when we think about gift giving. I decided to design a dome shaped box that opened with moving curved doors. (dear iPhone users, sorry if the videos don’t work for you, please consider upgrading)

3d printed prosthetics Elias and Jorge, both from Paraguay, “Fist bump” during a photo shoot with their new Po Paraguay e-NABLE devices. In early 2014, medical student Eric Dijkhuis and electronic engineer Fernando Vallese, both from Paraguay, found themselves stumbling onto the enablingthefuture.org website and explored the ever growing e-NABLE Community Google+ group where approximately 200 volunteers (now over 6500!) had started gathering and planning ways in which they were going to “change the world” with 3D printed hands. Modeling a Printable Stackable Hexagon Model in SelfCAD: 12 Steps (with Pictures) After creating the solid hexagon box Now we need to subtract one box from the other but before we do that, we have to scale one of them to be smaller than the other one to shape and create the void space inside the box to become a tube that we can use to put drawer inside it.To scale one of them select only one of them and choose the Scale Tool from transformations section in the toolbar or press L in your keyboard.To have a better vision and see the two objects clearly while scaling, make the appearance of them in wireframe mode selecting wireframe option on the left hand-side as shown in the first image above.Now let’s scale. Drag from the center scale point to scale in the 3 dimensions and to scale the object overallAnd then drag the upper point to scale in Y dimension or to scale vertically.And now let's use mesh and wireframe together. Select the bigger box and move it up.The idea of doing this is to make the subtract object go completely inside the big box

Face Tracking 3D-WPF C# Sample Kinect for Windows 1.5, 1.6, 1.7, 1.8 When you run this sample, you see the following: The scene in front of the camera is rendered. Once your skeleton is tracked, a mask is rendered hovering over the face and the mask tracks the movement of the player's face through the scene. This is similar to the Face Tracking Basics-WPF C# Sample. Choi Xoo Ang – Unique Sculptural Art I love Choi Xoo Ang human emotion art. Choi Xoo Ang is an emerging mixed media artist based out of Seoul, South Korea who creates figurative sculptures out of clay and resin that examines human rights, society’s pathological state, and sex and gender politics among other themes. The distorcion of the reality is something amazing in his work where you can feel a little of the real in the whole fantasy.

Tutorials [Documentation] At long last, some meshmixer documentation! [Online Tutorials] Sun, Earth and Moon Model (Tellurion / Orrery) With 3D Printed Parts: 7 Steps (with Pictures) The most important part of tellurion design is working out what all the gear ratios should be to reflect accurately the motions of the heavenly bodies. Superficially this is quite easy, but there is a trap for the unwary (which I fell into twice!). It arises because the axes of the gears modelling the earth and moon motions revolve once around the sun axis in one 'year', thus the attached celestial bodies will experience one rotation with respect to the sun even in the absence of those same gears. It's well worth doing your research thoroughly and not believing the first thing you read.

Pretty Much Every Totally Free Piece of Stock Footage and Motion Asset You Could Ever Want – Black Chip Collective Stock footage gives editors the opportunity to say “Hey cinematographers, we don’t need you! Take your expensive toys and your sunlight and get lost!” But more likely you just need to fill in a few holes or to get some extra assets for effects. And stock footage can easily put a big ol’ hurtin on the wallet. We’ve collected 43 sources for totally free stock footage to give you options when the budget’s gone dry. Before we begin, let’s talk about licenses.