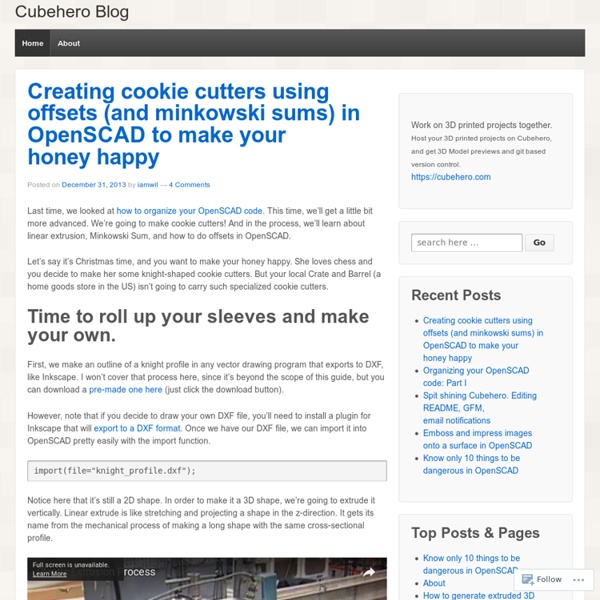 WebGL Inspector An advanced WebGL debugging toolkit About WebGL Inspector is a tool inspired by gDEBugger and PIX with the goal of making the development of advanced WebGL applications easier. What Firebug and Developer Tools are to HTML/JS, WebGL Inspector is to WebGL. Banque d'images 3D Banque d'images 3D Recherche avancée Connexion La Buca Chair and Stool - Walnut by: Brendan Ravenhill Studio Open Source Wedding Rings [update 1][update 2] I lost my wife’s wedding band a few years ago. She handed it to me while I was driving and asked me to take it to a jeweler to get it hammered back “in round”. Of course, I lost it immediately.

GLSL 1.2 Tutorial In this tutorial shader programming using GLSL 1.2 will be covered. Although many parts are now considered deprecated, the essence of GLSL has remained constant. Besides, this tutorial will continue to be online because learning the basics of deprecated OpenGL is easier than learning the new versions. If you’re looking for a GLSL tutorial that deals only with non-deprecated features visit the GLSL Core tutorial, here in Lighthouse3D. Blender 2.67 RC1 and DVD Training Blender for 3D Printing Released April 28, 2013 Open-source 3D creation suite Blender has released the first Release Candidate of Blender 2.67. Major improvements are the inclusion of FreeStyle, subsurface scattering for Cycles, optimizations in the motion tracker and the new 3D printing toolkit. The new 3D printing toolkit is a collection of useful tools including statistics, error checking, cleanup and export, to make it easier to export models for 3D printing.

Projets et réalisations du Navlab // Module names are of the form poly_<inkscape-path-id>(). As a result, // you can associate a polygon in this OpenSCAD program with the corresponding // SVG element in the Inkscape document by looking for the XML element with Mazzo di Fiori & the Next Generation 3D Printer by Joshua Harker I am an artist. I have become known for my pioneering work in the 3D printed medium & have a professional history in product invention/design & development. My art is about pushing the limits of form... an exploration into what can be made & how to accomplish it. Softimage Software Features We regret to inform you that the upcoming 2015 release will be the last one for Softimage® software. This final version is expected to ship on or around April 14, 2014. Autodesk will continue to offer product support until April 30, 2016.