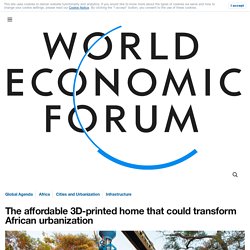 There is currently not enough housing stock to go round. This company can 3D-print homes following an affordable, low-carbon process. In Malawi, it has recently 3D-printed a home and a school. This 3D-Printed House Will Be Recyclable and Zero Waste. Work is almost complete on a series of 3D-printed houses that push the boundaries of construction and fabrication. 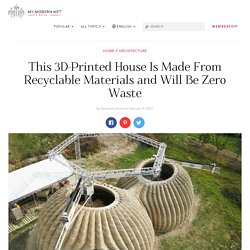 Called TECLA, this project features futuristic dome-shaped dwellings located near Bologna, Italy. The unusual forms and uniquely layered interiors make TECLA interesting enough on its own, but the style is not what makes this project so special. Designed by Mario Cucinella Architects and planned for fabrication by WASP­­, TECLA features 3D printers that mechanically place layers upon layers of clay made from natural and local materials. This means that the building is zero-waste because all construction materials assembled in the structure can easily be recycled. Once complete, it will be the first house to be built with these materials in this fabrication process, and it will also be the first to be produced by multiple 3D printers working on the same structure. This is the first house to be 3D printed from raw earth. The project began out of research by Cucinella and Wasp founder Massimo Moretti with the School of Sustainability, who were looking into the need for sustainable homes at Km0 – ie. using materials found on site, negating the environmental impacts of transporting materials to building sites. 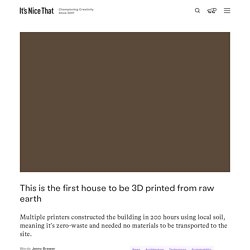 The result is Tecla, which is an almost zero-emission and low carbon process. “Tecla shows that a beautiful, healthy, and sustainable home can be built by a machine,” adds Moretti. The architect studied how a building’s shape could impact its efficiency, in relation to its climate and latitude; and how the material composition of the building could help with insulation and ventilation. Rael San Fratello 3D prints mud structures as prototypes for low-cost construction. To explore the possibilities of mud architecture, Rael San Fratello has created 3D-printed prototypes that take cues from historical earthen construction built along the Rio Grande river. 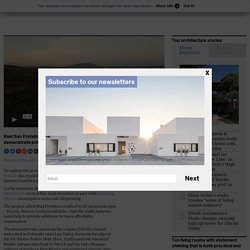 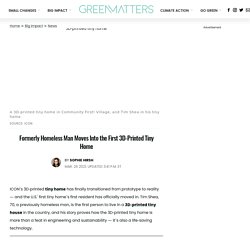 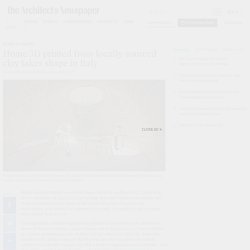 But while architecture students and firms commonly reserve space of their desks for a 3D printer to create high-fidelity scale models as communicative tools, Cucinella has set his sights much higher than the rest. Last September, printing began on the architect’s first prototype of a two-room house in Massa Lombarda, a quiet comune east of Bologna, Italy. Named TECLA in a nod to an imaginary place in Italo Calvino’s Invisible Cities, the home was engineered by Italian company WASP to become the very first to be entirely printed from a locally-sourced clay that is both biodegradable and recyclable. The world's first 3D-printed neighborhood is being built in Mexico for families living on $3 a day. The houses aren't just a prototype. 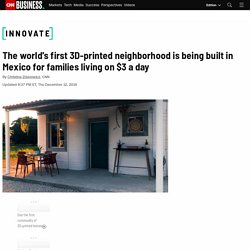 Developers hope to build 50 new houses by the end of 2020, replacing the structures that residents built themselves out of wood, metal and whatever materials they could afford. The families live in a seismic zone that's prone to flooding in the state of Tabasco, Mexico. Building something that will withstand an earthquake and keep them dry during heavy rains was a key consideration when it came to the design. КАК ПОСТРОИТЬ ДОМ ЗА 24 ЧАСА? Строительство своими руками. Dom wybudowany w 24 godziny, kosztuje mniej niż 15 tys. zł - Dobre Wiadomości.

Watch a Giant 3D Printer Spit out an Entire Boat. Three for One The University of Maine just set three world records in one fell swoop. 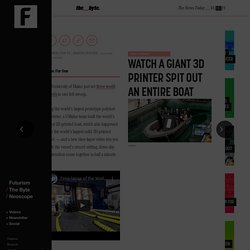 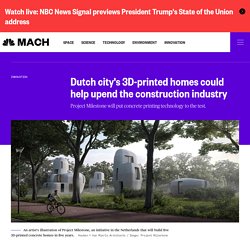 July 2, 2018, 9:12 PM GMT / Updated July 3, 2018, 10:50 AM GMT By Ella Koscher In the Dutch city of Eindhoven, engineers, contractors and architects have joined forces to create one of the world's first 3D-printed commercial housing projects. Dubbed Project Milestone, the initiative will use a huge 3D printer to fabricate five concrete houses in a wooded area near the city's airport. Plans call for the first home, a three-bedroom dwelling of just over 1,000 square feet, to be completed in mid-2019 — though the entire initiative will take five years because the technology is still being refined. The effort is being undertaken in the midst of a shortage of bricklayers in the Netherlands, Rudy van Gurp, a project manager at Van Wijnen, the construction firm that's overseeing the project, told CNN. "I feel excited," van Gurp told NBC News MACH in an email. But will 3D printing really revolutionize the construction industry? A Company 3D-Printed a House in 24 Hours for Only $10,134. 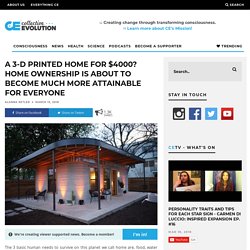 Become a member! The 3 basic human needs to survive on this planet we call home are, food, water and shelter, but according to a report by the World Resources Institute Ross Center for Sustainable Cities, there are 1.2 billion people worldwide who do not have adequate housing. On March 12th at the South by Southwest (SXSW) conference in Austin Texas, startup ICON revealed it’s approach to combat this housing deficiency, by using 3D printing as a potential solution which is really quite impressive. The company has developed a way to print a single-story 650 square foot house made from cement in about 12-24 hours, less than a day to build an entire house – isn’t technology amazing sometimes?

Just consider the time it would take to construct and build that house using conventional methods, all of the measuring, cutting, planning etc. Check It Out How Does It Work? To have a tour of the home, click here. Much Love. 3D printed cabin by emerging objects is made from living, plant-filled tiles. Located in oakland, this 3D-printed cabin by emerging objects breaks new ground in sustainable, custom-made dwellings. founded by ronald rael and virginia san fratello, the california-based studio, specializing in 3D-printing research and design, brought together many of their previous material and software experimentations to explore the possibilities of a weatherproof, free-standing, compact structure. all images by matthew millman photography the exterior is clad in a total of 4,500 tiles of two types. on the roof and adjacent walls, the 3D-printed ceramic ‘seed stitch’ tiles serve as a rainscreen. using a g-code to control each line of clay as it was printed, the studio created a loopy texture where, due to the machine’s marginal errors and the material’s behavior, each tile is unique. on the front facade, the planter tiles offer pockets for succulents to grow, forming a living wall of vegetation that blends the cabin within its surroundings. project info:

This cheap 3D-printed home is a start for the 1 billion who lack shelter. Food, water, and shelter are basic human needs, but 1.2 billion people in the world live without adequate housing, according to a report by the World Resources Institute’s Ross Center for Sustainable Cities. The world’s largest Delta 3D printer can print nearly zero-cost housing out of mud. Posted Categories: Building Methods The future of affordable (and sustainable) housing may lie with 3D printing. The World’s Advanced Saving Project (WASP) will soon unveil the world’s largest delta-style 3D printer that can build full-size buildings out of mud and clay for nearly zero cost.

The massive 12-meter-tall (40 feet) BigDelta printer will make its official debut and show off its eco-friendly printing prowess tomorrow at “Reality of dream,” a three-day event in Massa Lombarda, Italy. Italian innovator Massimo Moretti launched WASP with the goal to “create a means for affordable fabrication of homes, and provide these means to the locals in poverty stricken areas.” WASP’s affordable housing solution combines 3D printing with biomimicry, drawing inspiration from the mud dauber wasp that constructs its home from one of the world’s oldest building materials: mud.

10 completely 3D printed houses appears in Shanghai, built under a day. April 1, 2014 Back in 2011, University of Southern California Professor Behrokh Khoshnevis said new technology will soon allow massive 3D printers to build entire multi-level houses in under a day. A group of 3D printed houses, 200 m2 each, recently appears in Shanghai, China. These building were created entirely out of concrete using a gigantic 3D printer, and each costs only 30,000 RMB ($4,800).

The company behind these 3D printed building, Shanghai WinSun Decoration Design Engineering Co, said it has for years been working on developing the system and its materials. The company owns 77 national patents of construction materials, such as glass fiber reinforced gypsum and special glass fiber reinforced cement. While Hobbyist models of 3D printers are currently available for only a few hundred dollars and lets users feed plastics and polymers into a machine, the company takes this technology to a bigger level. Delta Wasp the 3d printer for clay houses. Wasp-inspired 3D printer can build homes out of mud. Inspired by the mud dauber, a little wasp that builds its home with mud, Massimo Moretti developed a way to create mud houses using 3D printing technology. Traditionally, earthen houses are formed by hand in a laborious, tedious process. But with a 3D mud printer, a house can be made in a couple of weeks. His organization, World’s Advanced Saving Project (WASP), is dedicated to making housing affordable, particularly in places where the most abundant resource may be earth.