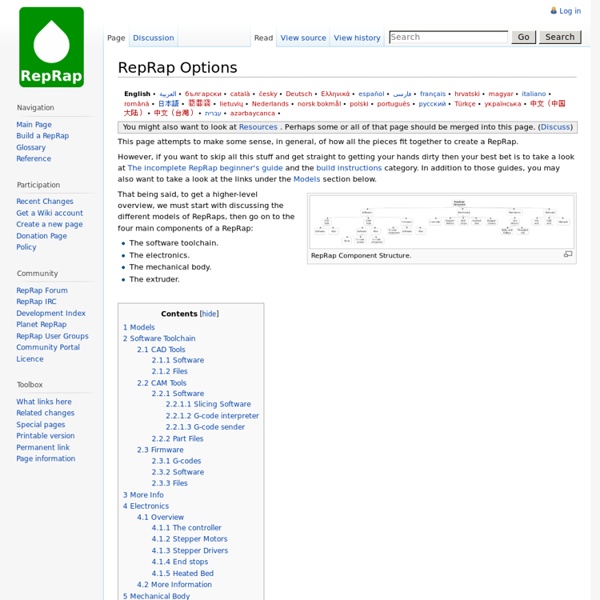 You might also want to look at Resources . Perhaps some or all of that page should be merged into this page. (Discuss) This page attempts to make some sense, in general, of how all the pieces fit together to create a RepRap. However, if you want to skip all this stuff and get straight to getting your hands dirty then your best bet is to take a look at The incomplete RepRap beginner's guide and the build instructions category. In addition to those guides, you may also want to take a look at the links under the Models section below. RepRap Component Structure. That being said, to get a higher-level overview, we must start with discussing the different models of RepRaps, then go on to the four main components of a RepRap: The software toolchain. Models These days there are a growing number of many great and detailed build instructions for RepRaps! If you're steampunk or just like to get away without commercial kits, there are also RepStraps. Software Toolchain CAD tools. CAD Tools Software Files Related:  3D PRINT • elettronica

What is a Bowden extruder? | Start 3D PrintingStart 3D Printing One of the challenges when getting started with 3D printing is learning the terminology. Depending on your background, the various mechanical and project names may be complete gibberish. Fortunately, most of the ideas are pretty simple when you take a step back. For example, let’s look at the Bowden Extruder. In its simplest form, when someone refers to a Bowden-style extruder, what they mean is that there’s a flexible tube guiding the filament from the extruding motor (cold-end) to the nozzle (hot-end.) In fact, you can convert a “traditional”, direct extruder into a Bowden extruder by separating these two parts and running a tube (generally made of teflon) between them. The Direct Extruder The direct extruder is more common, and it’s easier to explain the Bowden variant in terms of its differences. (Source: RepRap.org wiki) The diagram above illustrates the workings of a typical, DIY extruder. (Image source: flickr.com/photos/jabella/8965234122/) The Bowden Extruder Why go Bowden?

CAM Toolchains Java development THIS page is an extremely rough draft. You can help us improve it. This page has been flagged as containing duplicate material that Firmware/Alternative also attempts to cover.These pages should be merged such that both pages do not attempt to cover the duplicate topics. The software used for RepRap can be divided into two categories: CAD (Computer Aided Design) and CAM (Computer Aided Manufacturing). A hypothetical software toolchain process for a new design would be: Design a new 3D model in a CAD package (ex: OpenSCAD, FreeCAD, ProEngineer, SolidWorks) Export the design's geometry to a .stl file Generate motion paths & extruder commands in GCODE format by means of a "slicing" program (ex: skeinforge, repsnapper, SFACT) Use a host software package to communicate the GCODE to the printer (ex: printrun, repsnapper, replicatorG, Repetier-Host) The firmware installed on your printer determines how the printer controller reacts to the GCODE you send it. G-code, Etc.

Improved Analog & Digital Interface with Arduino « Analog inputs with Arduino and EMC | Newest entries | Generating HAL files from Eagle schematics » Building on my earlier work , I've now improved the interface between HAL and the Arduino board to have: 6 10-bit analog inputs 6 8-bit PWM "analog" outputs 6 digital inputs/outputs (partition chosen when component is loaded) GPL license statement in source files As before, the driver consists of an Arduino Sketch ( halintf.pde ) and a HAL Userspace Component written in Python ( arduino.py ). First, load the sketch (firmware source code file) in the Arduino GUI, compile it, and transfer it to the board. Now, if you don't already have it installed, install using apt-get or Synaptic Package Manager. Next, copy arduino.py to the name (no extension) in a directory on your PATH. To demo it, in the sample hal script , change the line to reflect the serial port where the arduino is connected. Silkscreen Text (Diecimila board) HAL pin name arduino.analog-in- arduino.digital-out- or arduino-digital-in-

Mendel User Manual General Powering up the RepRap Using RepRap How to print parts Designing things to make Converting a simple 2D image into a printed object See Mendel_User_Manual/Converting_a_simple_2D_image_into_a_printed_object for detailed instructions. More File:FFFDesignGuide.pdf If you are designing things to be made in RepRap, Ed's guide on to how to design for FFF above may be useful. Rather than design things completely from scratch, you might save a bit of time by starting from something in the Available Files and tweaking it to fit your needs. See also the Useful Software Packages to create STL models. Mechanical Software and Firmware The pages linked here contain some duplication of material and topics. Files and Formats RepRap G Codes - This defines all the G Codes used to communicate from the host computer to the RepRap machine. Translations of this page Deutsch: Mendel_Gebrauchsanleitung

Automatic bed leveling and z offset howto (Level 2/3) (Page 1) — Hacks & Mods — SoliForum - 3D Printing Community This is a guide to setup the automatic bed leveling feature on a Solidoodle. You will need to replace your extruder, solder some headers on your motherboard and recompile the firmware. If you this is outside your comfort zone, I am afraid this guide is not for you. Moreover, it will only work with a Printrboard or a Sanguinololu with an ATMega1284p (or a RAMPS). If you have an original solidoodle motherboard with an ATMega644, you will need to replace the chip (it's 10$ on ebay). The idea behind automatic bed leveling is that the Z-endstop is mounted on the extruder carriage, so that the distance between the extruder and the bed can be probed in multiple points. The feature is available in the newest Marlin firmware. Part 1: hardwareAs you see in the video, the Z probe is attached to a small servo motor that can move it up and down. The Z-stop endswitch is then mounted on the arm attached to the servo motor. The servo motor needs to be wired to the motherboard.

Skeinforge - DEMOZENDIUM From DEMOZENDIUM Skeinforge is a tool chain composed of Python scripts that converts your 3D model into G-Code instructions for RepRap. Updating Skeinforge manual Skeinforge Manual Update advice from Enrique for updating pages and setting up a new structure. Tutorials Allan Ecker aka The Masked Retriever BotHacker Keep it Cool! C Blair 3D Model to G-Code File for Rapman Cliff Biffle, Nick Ames & Rick Pollack Compendium of calibration information: How to Calibrate and Tune Skeinforge for your MakerBot Daniel K. Skeinforge for RapMan Dave Durant Keith Fixing CupCake Build Problems Marius Kintel Explanation of setting the important Skeinforge parameters, extrusion width and layer thickness: reprap.org - Skeinforge Width Thickness Tutorial Nick Ames Skeinforge Tutorial: wiki.makerbot.com - Configuring Skeinforge Rapmanist How to Generate Gcode with Skeinforge video. Tony Thanks With thanks to all the above and Enrique who has a Blog for discussion of all things related to Skeinforge: Fabmetheus Blog What Overview

Prusa Mendel Assembly Prusa Mendel Documentation Before assembling a Prusa Mendel, make sure you have all the parts necessary. For the bill of materials, see Prusa Mendel. For the visually oriented, have a look at this photo gallery of an ongoing Prusa Mendel build. You may also want to watch the complete video series for assembling a Prusa 2 How_to_build_Prusa_2. Notes: Heating the flat side of a bushing with a hair dryer or heat gun before snapping onto the smooth bar can keep it from snapping. Frame Triangles This step takes about 15 minutes per triangle, for a total of 30 minutes. There is a triangle on each side of the Prusa RepRap. Parts Required (per triangle) 2 RP footed frame vertices 1 RP frame vertex (non-footed) 1 RP bar clamp 3 370mm M8 threaded rods 14 M8 nuts 14 M8 washers (Optional but recommended) A piece of threaded rod or wood or any other material with precisely 290mm length. Front Threaded Rods This step takes about 30 minutes. Parts Required 2 assembled frame vertex triangles 2 RP bar clamps

ELM - DC Servomotor Controller This is an experiment on the closed loop DC servomotor control system (SMC). It will able to be used for practical use with/without some modifications. The closed loop servo mechanism requires real-time servo operations, such as position control, velocity control and torque control. Recently, most servo systems are using brushless motors called "AC servo motor" to reduce maintanance cost. Hardware Figure 1. Figure 2. Figure 1 shows the block diagram for SMC. Figure 2 shows the circuit diagram for SMC. JP1 is an ISP connector to program the AVR, and it can also used to attach an LED display board. Figure 3 shows the built servo controller board. Software Figure 4. Figure 4 shows the theory on the positioning servo mechanism. The servo operator consists of error amplifires and PID filters. The single loop servo control shown in figure 4 is called "Conventional servo mechanism". Figure 5. Figure 5 shows the servo operation for SMC. Position capture Figure 6. Internal processes for SMC

Prusa Mendel (iteration 2) Prusa Mendel Documentation Prusa Mendel Release status: working Introduction Dimensions The external dimensions of the Prusa Mendel Iteration 2 are approximately 44x47x37 cm. Main improvements The following is a list of the main improvements made on the original Prusa More parts are made to be push-fit The carriages accommodate bushings and linear bearings Nut traps were added to parts that were attached with M3 screws (e.g. endstop holders etc.) Development The development of the Prusa Mendel is hosted on github: History Printed Parts Printing Prusa Mendel Iteration 2 Download the parts using the github link below, then print the parts you require. The Greg Frost Accessible Extruder contained within the repository will not fit your bolts and nuts correctly! Parts The [Github repository] for the iteration 2 has all the STL files you need in order to make the printer. The following is a list of what needs to be printed: Non-printed parts Assembled Model Extruder