» Soluble Support Material 3D Printing Providence. When printing with an FDM 3D printer, such as a Makerbot or RepRap, you run into problems when printing objects that have large overhangs or bridges within your model. 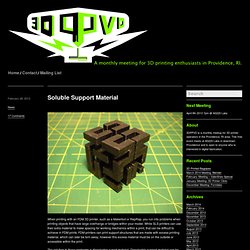 While SLS printers can use their extra material to make spacing for working mechanics within a print, that can be difficult to achieve in FDM prints. FDM printers can print support structures that are made with excess printing material, which can later be torn away, however this excess material must be on the outside or accessible within the print. The solution to these problems is dissolvable suport material. Dissolvable support material can be printed to create a support structure within your model, but can later be removed by placing the print in a solution that removes that material.

Many materials have been tried for use with hobby printers but without great results… Until now! I have been working with HIPS (High Impact Polystyrene) plastic from Filaco, printing in combination with ABS. Getting a good print - re:3D. Tips and tricks to 3D printing Additive manufacturing is not a magical process. 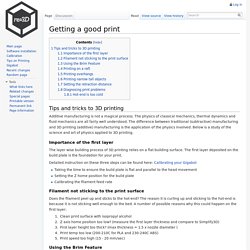 The physics of classical mechanics, thermal dynamics and fluid mechanics are all fairly well understood. The difference between traditional (subtractive) manufacturing and 3D printing (additive) manufacturing is the application of the physics involved. Below is a study of the science and art of physics applied to 3D printing. Importance of the first layer The layer wise building process of 3D printing relies on a flat building surface. Detailed instruction on these three steps can be found here: Calibrating your Gigabot Taking the time to ensure the build plate is flat and parallel to the head movement Setting the Z home position for the build plate Calibrating the filament feed rate Filament not sticking to the print surface Does the filament peel up and sticks to the hot-end? 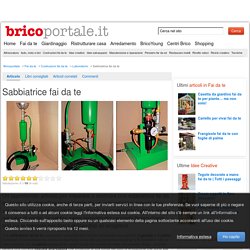 The FlashForge Creator family of printers are great printers for the price, but over the past several months, I have had to solve a number of problems and research a lot of answers in order to get everything working as I wanted. 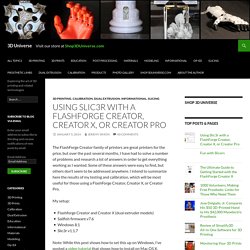 Some of these answers were easy to find, but others don’t seem to be addressed anywhere. I intend to summarize here the results of my testing and calibration, which will be most useful for those using a FlashForge Creator, Creator X, or Creator Pro. My setup: Flashforge Creator and Creator X (dual extruder models)Sailfish firmware v7.6Windows 8.1Slic3r v1.1.7 Note: While this post shows how to set this up on Windows, I’ve posted a video tutorial that shows how to install on Mac OS X. As outlined in a previous post, I spent a good deal of time testing out various slicing software. I recommend first installing the latest Sailfish firmware and following the Sailfish installation, setup, and tuning guides. Download and install the latest stable version of Slic3r. . #! Guide: How to calculate length of Filament - 3D Printer Filament. How many meters of Filament? 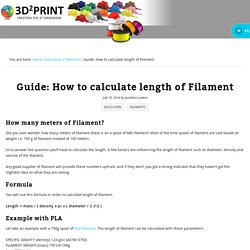 Did you ever wonder how many meters of filament there is an a spool of ABS filament? Most of the time spools of filament are sold based on weight i.e. 750 g of filament instead of 100 meters. So to answer the question you’ll have to calculate the length. A few factors are influencing the length of filament such as diameter, density and volume of the filament. Any good supplier of filament will provide these numbers upfront, and if they don’t, you got a strong indicator that they haven’t got the slightest idea on what they are selling. Formula. 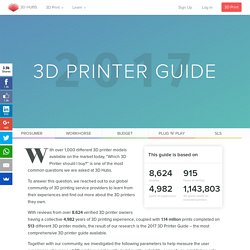 Is one of the most common questions we are asked at 3D Hubs. To answer this question, we reached out to our global community of 3D printing service providers to learn from their experiences and find out more about the 3D printers they own. 3D printing parts with overhangs using new dissolvable support material. Feb.28, 2013 ABS and PLA filaments have been used in 3D printing community for quite a long time. 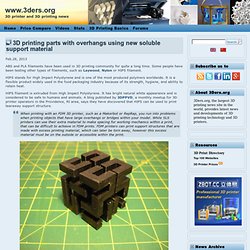 Some people have been testing other types of filaments, such as Laywood, Nylon or HIPS filament. HIPS stands for High Impact Polystyrene and is one of the most produced polymers worldwide. It is a flexible product widely used in the food packaging industry because of its strength, hygiene, and ability to retain heat. HIPS filament is extruded from High Impact Polystyrene.