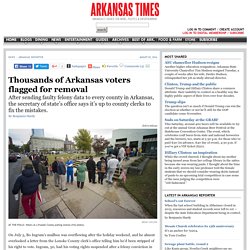 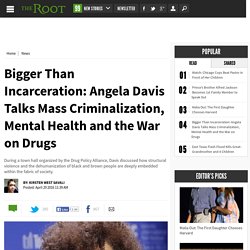 Moderated by DPA Senior Director Asha Bandele, the conversation moved beyond just the hard facts to tackle hard truths, one of which is that the so-called war on drugs is a large-scale storefront operation intended to disguise this nation's war on black, brown and poor people, and that mass incarceration is but one strategy employed. 10-Year-Old Spot-On About The Unfair Criminal Justice System.

Apr. 10,2016 If you think children, especially African-American kids, are oblivious to everyday things happening in their communities, watch this kid blow your mind as he calmly, rationally, and eloquently scrutinizes the failed criminal justice system. 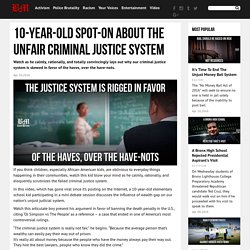 In this video, which has gone viral since it’s posting on the Internet, a 10-year-old elementary school kid participating in a mini debate session discusses the influence of wealth gap on our nation’s unjust judicial system. Watch this articulate boy present his argument in favor of banning the death penalty in the U.S., citing ‘OJ Simpson vs The People’ as a reference – a case that ended in one of America’s most controversial rulings. Man Goes To Jail For $31 Worth Of Candy. Apr. 04,2016 A 34-year old man Jacobia Grimes who allegedly stole $31 worth of candy has been charged under the state’s “habitual-offender law” and could face life imprisonment with his act. 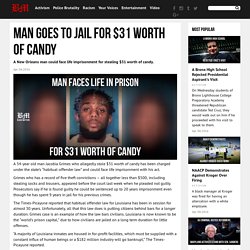 Grimes who has a record of five theft convictions – all together less than $500, including stealing socks and trousers, appeared before the court last week when he pleaded not guilty. Prosecutors say if he is found guilty he could be sentenced up to 20 years imprisonment even though he has spent 9 years in jail for his previous crimes. Obama's 'Ban the Box' Action Helps, But Released Inmates Still Face Major Hurdles. President Obama announced Monday that his administration will refrain from asking about a job seeker’s criminal background at the application stage for most positions. 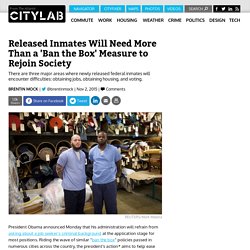 Riding the wave of similar “ban the box” policies passed in numerous cities across the country, the president’s action* aims to help ease the process of securing jobs for those coming out of prison, in hopes that the gainfully employed will be less inclined to return. The announcement coincides with the early release of some 6,000 prisoners from federal custody, who have been either incarcerated or were under legal supervision. Their release began Friday, October 30, and will run through Tuesday, November 3. Another 8,500 federal prisoners are eligible for early release before next November, while some 46,000 drug offenders in total could be freed over the next few years, according to the U.S.

Sentencing Commission. Swedish hospital is opening up a rape clinic for men. In a push to ensure gender equality for victims of sexual assaults, the Stockholm South General Hospital announced it will open the first “rape clinic” for men in Sweden. 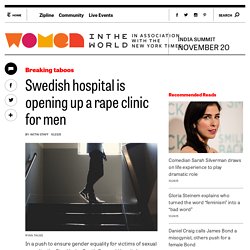 The hospital already has a similar walk-in center for women, but decided to open one specifically for men as male rape is still “extremely taboo” and often goes unreported. “The general perception is that men cannot be raped,” Lotti Helström, a senior physician at the hospital told local media. “In studies, the health effects are shown to be greater for men, both in terms of physical health and mental health. There is a greater risk of a raped man getting post-traumatic stress disorder.” Read the full story at VICE. For Men in Prison, Child Support Becomes a Crushing Debt. E arl L. 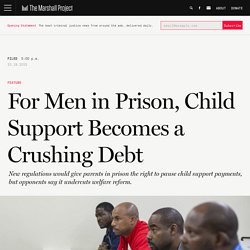 Harris did not owe child support when he was sent to prison in 1997 for selling marijuana. He now concedes that dealing drugs may have been a stupid move for a new father. Report: At least 70k rape kits remain untested in U.S. police depts. HARI SREENIVASAN, PBS NEWSHOUR WEEKEND ANCHOR: When a woman reports a rape, soon after it occurs, authorities are able to get a rape kit — physical evidence extracted from the victim’s body which may contain the valuable DNA of the perpetrator. 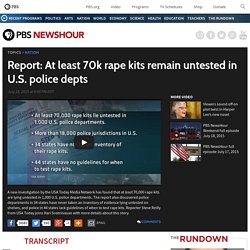 But what happens afterward? There have been stories over the years of cities like New York, Los Angeles and Detroit facing massive backlogs of untested rape kits. But this week, we learned this is a much bigger problem nationwide. Sandra Bland And The Invisible Plight Of Black Women In The Justice System. ACLU Massachusetts. An independent report released over the July 4 weekend on the Boston Police Department’s encounters with civilians confirms exactly what the BPD and the ACLU were told in March 2014, and what the ACLU said in a report released nearly 9 months ago – namely, that BPD’s street encounters reflect racially disparate treatment of Black and Hispanic people in Boston. 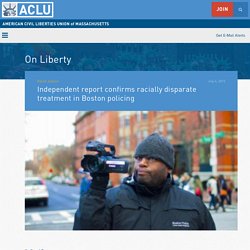 The ACLU of Massachusetts is pleased to hear that the BPD will adopt some of the reforms we recommended in our October 2014 report, Black, Brown & Targeted, including a bias-free policing policy and regular publication of data. News — Essie Justice Group. New Study Shows Stunning Number of Women with Incarcerated Loved Ones in the U.S. 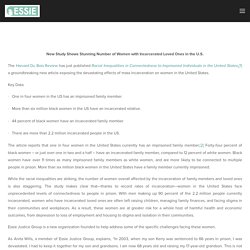 John Oliver: The U.S. Bail System Screws the Poor, Rewards Reality TV. One Reason Why False Rape Allegation Statistics Are So High. Men, even good men, believe women lie about rape. ‘Til Death Do Us Part: Inside the Pulitzer Prize-Winning Domestic Violence Ex... Police Cadet Quits Academy, Reports Cops After Witnessing Homeless Man Being ... District Attorney Kari Brandenburg has provided new details in the case of two Albuquerque police officers who are under investigation for brutality after allegedly beating a homeless man on March 20. According to Brandenburg, the person who reported the assault was a police cadet who has since resigned. Few details are known about what exactly transpired, and Police Chief Gorden Eden told KOAT that it is partly because he’s concerned for the safety of the cadet who reported the incident.

Mayor Richard Berry says the fact that it was an employee shows there is a level of comfort and internal accountability within the department, as someone felt safe enough to come forward. However, the department is afraid for anyone to know the identity of the cadet – possibly implying that they do not even trust their own officers. Unfair gang laws in California discriminate - The Muslim ObserverThe Muslim O... Michelle Alexander Gives A Fascinating Analysis On How White Privilege Allows...

If Reporting A Robbery Was Like Reporting A Rape. Judge feels remorse for doling out 55-year marijuana sentence. Weldon Angelos went to prison at age 24 and may not see freedom until he’s a senior citizen — all for three marijuana charges. The retired federal judge who sentenced Angelos in 2002 now says justice wasn’t served. Paul Cassell, a former federal judge in the Utah circuit, spoke to ABC News: Portugal Cut Addiction Rates in Half by Connecting Drug Users With Communities Instead of Jailing Them.

Don’t Know What to Tell Your Children to Do if Stopped by Police? Watch ‘Get ... D.C. Police Chief: Arresting People For Marijuana Possession 'Never Was Produ... Unforgivable: The Governor and the Teen-ager. Our Obsession With Mass Incarceration May Finally Be Ebbing. —Kevin Drum on Fri. NYPD Shooting: Blue Lives Matter. Talking about "police reform" obscures the task. 13 Things That We Re-Learned About the Prison Industrial Complex in 2014. Edward Banfield: The racist, classist origins of broken windows policing. The Smear Campaign Against 12-Year-Old Killed by Cops Has Begun.

‘Prison is not for punishment in Sweden. We get people into better shape’ California Tells Court It Can't Release Inmates Early Because It Would Lose C... What Predicts NFL Arrest Records: Position or Disposition? Megabanks Have The Federal Prison System Locked Up. Saturday Stat: The Average Prisoner is Visited Only Twice. Symbolic Interactionism Approach to Mass Incarceration. Man Arrested While Picking Up His Kids: 'The Problem Is I'm Black' How the Supreme Court Protects Bad Cops - NYTimes.com. The Embarrassing Problems with U.S. Prisons. Students Develop Nail Polish That Can Detect Date Rape Drugs. 4 reasons Darren Wilson’s defenders should think twice.

#IfTheyGunnedMeDown Attacks Portrayals of Black Men Killed by Police. A SECOND CHANCE AT LIFE Chicago Tribune 7/30/14. Marijuana Arrests Four Times as Likely for Blacks. When It Comes To Illegal Drug Use, White America Does The Crime, Black America Gets The Time. States That Slashed Their Prison Populations Have Seen Disproportionate Drops In Crime, Too. Michigan inmates to get black-and-white striped uniforms. Orange is now too cool, sheriff says. Shorter terms for drug inmates Chicago Tribune 7/19/14. Op-Ed: Feminism and the PIC: Why “Add-Incarceration-and-Stir” Doesn’t Cut It.

How Banning One Question Could Help Ex-Offenders Land A Job. How tough-on-crime policing affects poor Chicago Tribune 6/30/14. GANG DIDN’T TAKE ‘NO’ FOR AN ANSWER Chicago Tribune 6/20/14. Man_rescues_baby_still_cant_lose_ex-con_status. Race, the War on Drugs and Mass Incarceration. Blackie’s owners admit to stealing Chicago Tribune 6/6/14. Death penalty by the numbers chicago Tribune 6/2/14. Byron Williams is just one of the men who was turned away by the Chicago poli... Boy’s shooting death a street lesson. Copyright vs.