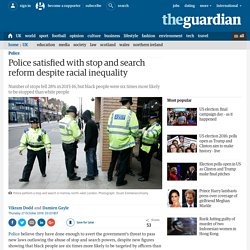 The official figures show a big fall in police use of stop and search for all ethnic groups. While more than eight in 10 incidents still lead to no arrest, changes appear to have reduced the police time wasted and infringements on the rights of innocent people. However, the power is being used more disproportionately against black people than white people and that disparity grew in the past year. A black person was six times more likely to be stopped and searched by police than a white person, up from four times more likely the year before. The government has threatened to pass new laws if the police do not reform sufficiently, but the issue now is whether ministers view the progress as sufficient. Torture -The Guantanamo Guidebook. About the campaign. Electric shocks. 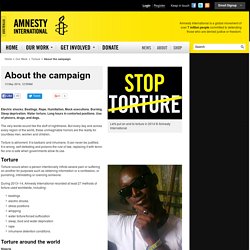 Beatings. Rape. Humiliation. Mock executions. Burning. The very words sound like the stuff of nightmares. Torture is abhorrent. Torture Moses Akatugba was tortured and wrongfully sentenced to death for a crime committed when he was 16. Torture occurs when a person intentionally inflicts severe pain or suffering on another for purposes such as obtaining information or a confession, or punishing, intimidating or coercing someone. During 2013–14, Amnesty International recorded at least 27 methods of torture used worldwide, including: beatingselectric shocksstress positionswhippingwater torture/forced suffocationsleep, food and water deprivationrapeinhumane detention conditions. Torture around the world Nigeria There is evidence of increasing use of torture in Nigeria. Mexico Claudia Medina Tamariz was a victim of torture in Mexico City © Amnesty International Use of torture and ill-treatment by security and police forces remains widespread throughout Mexico, and impunity rife.

Shaker Aamer will need years of therapy after release from Guantánamo. Former Guantánamo detainee Shaker Aamer, now back in the UK receiving treatment in hospital, is being urged to adopt a low profile and allow himself a chance to recover as he begins what are expected to be years of rehabilitation. 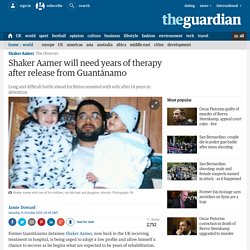 Aamer, who has been reunited with his wife Zin, was due to meet his children this weekend, including youngest son Faris, who was born on the same day Aamer arrived at Guantánamo. Trauma experts, former hostages and medical testimony provided by his psychiatrist, suggest Aamer, 46, faces a long and difficult battle to overcome the mental and physical afflictions caused by his near 14-year incarceration. In a petition filed last year, Aamer’s lawyers said he was suffering a range of chronic health problems, the worst of which was post-traumatic stress disorder. Dr Emily Keram, a forensic psychiatrist, said: “Mr Aamer experiences prolonged psychological distress and physiologic reactivity on exposure to reminders of trauma. 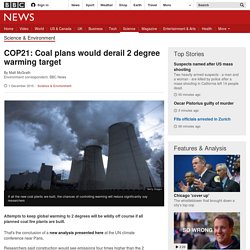 That's the conclusion of a new analysis presented here at the UN climate conference near Paris. Researchers said construction would see emissions four times higher than the 2 degree target by 2030. They say the building plans are in conflict with the carbon cutting agendas of countries like India and China. The Climate Action Tracker analysis says that 2,440 coal fired power stations are planned around the world before 2030. Emissions from the world's existing plants will be 150% higher than what is consistent with a 2 degree target, says their report. COP21 Live: read the latest from Paris But if all those in the planning stage are actually built, the outlook would be far more pessimistic. "If all of them were to be built, they would emit 6.5 gigatonnes of carbon dioxide in 2030," said Dr Niklas Hohne, one of the research team. 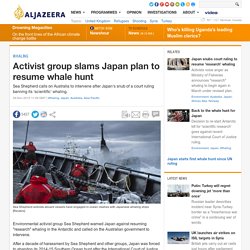 After a decade of harassment by Sea Shepherd and other groups, Japan was forced to abandon its 2014-15 Southern Ocean hunt after the International Court of Justice said the annual expedition was a commercial activity masquerading as research. But on Saturday, Japanese media reported it would start again next year, despite a call by global regulators for more evidence that the expeditions have a scientific purpose. "The pristine waters of the Southern Ocean are once again under threat from poachers," said Sea Shepherd chief executive Alex Cornelissen.

"We would like to remind the Japanese government that the whales of the Southern Ocean are protected by international law, by Australian law, and by Sea Shepherd. RELATED: Japan politicians defiant despite whale hunt ban Source: Agencies.