Michel Foucault Panopticon. I’ve been in Britain’s grimmest prisons, but Pentonville’s the worst. HMP Pentonville is a huge category-B prison situated in the heart of Islington – the north London borough that mixes champagne socialists with tracksuit-clad boys who can wheelie all the way from Holloway to Kings Cross on stolen Boris bikes. 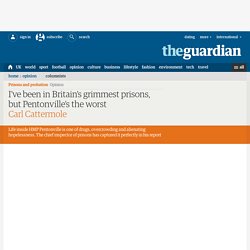 During my year inside, I spent time in some of Britain’s most notorious nicks. They were all threatening, alien environments – but Pentonville felt a shade more extreme. And this week’s report on Pentonville by the chief inspector of prisons is one of the most damning accounts I’ve read about British prisons – fiction included. Despite the inspector’s highly critical 2014 report on the same prison, standards have slipped further: a decent, stable regime for Pentonville inmates was promised, but this report imparts the contrary with vicious clarity. Since my release, I’ve sometimes felt like my stories of Pentonville have become over-dramatised, as though I had combined my real-life experience with fantasy learned from an ITV docudrama. Britain's most dangerous convicts reveal reality of life in highly restricted 'jails within jails'

The grim day-to-day existence of the 60 most-dangerous convicts in the country has been described in unprecedented detail, in a new report on the Prison Service’s highly restricted specialist units. 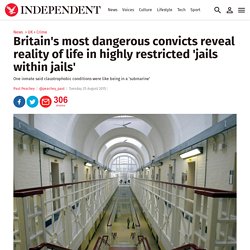 The little-known units, known as “jails within jails”, house the prison system’s most-notorious inmates. Most were sent to one of England’s five close supervision centres (CSCs) after attacking guards or other convicts. Once detained in a CSC, they are likely to be held for years in the “most restrictive conditions with limited stimuli and human contact”, according to a new report by HM Chief Inspector of Prisons. Violent criminals sent to CSCs in recent years include Charles Bronson, dubbed Britain’s most-dangerous prisoner, and the double killer Gary Nelson, who murdered PC Patrick Dunne in 1993. Charles Bronson, 'Britain's most dangerous prisoner' The inspectors also found that in most units there were too few activities to keep prisoners occupied. 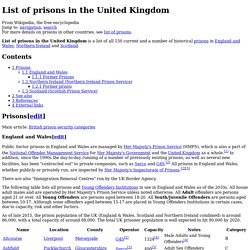 Prisons[edit] England and Wales[edit] Public Sector prisons in England and Wales are managed by Her Majesty's Prison Service (HMPS), which is also a part of the National Offender Management Service for Her Majesty's Government and the United Kingdom as a whole.[1] In addition, since the 1990s the day-to-day running of a number of previously existing prisons, as well as several new facilities, has been "contracted out" to private companies, such as Serco and G4S.[2] All prisons in England and Wales, whether publicly or privately run, are inspected by Her Majesty's Inspectorate of Prisons.[2][3] There are also "Immigration Removal Centres" run by the UK Border Agency. The following table lists all prisons and Young Offenders Institutions in use in England and Wales as of the 2010s. Former Prisons[edit] Former prison[edit] 'Not enough staff, too many drugs' - Britain's prisons. Going Underground: Inside Britain's prisons, cash-crazy MoD & the answer to Benefits Street (E42)

Domestic abuse: Police 'nearly overwhelmed' by increase. Image copyright PA Police in England and Wales are on the verge of being "overwhelmed" by "staggering" increases in reports of domestic abuse, inspectors say. 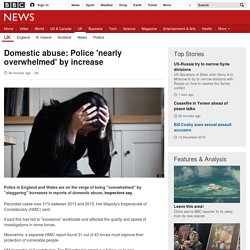 Recorded cases rose 31% between 2013 and 2015, Her Majesty's Inspectorate of Constabulary (HMIC) said. It said this had led to "excessive" workloads and affected the quality and speed of investigations in some forces. Meanwhile, a separate HMIC report found 31 out of 43 forces must improve their protection of vulnerable people. HM Inspector of Constabulary Zoe Billingham's report is a follow-up to one published by HMIC in March 2014, which highlighted "significant weaknesses" in the service police gave domestic abuse victims. The new report notes improvements since then, including a 31% increase in "domestic abuse related crimes" recorded by police - from 269,700 in the year to August 2013, to 353,100 in the year to March 2015.

There has also been a "determined effort" by police to make domestic abuse a priority, the report adds.