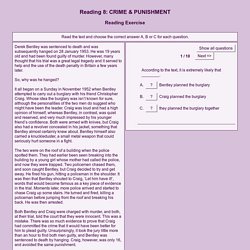 He was 19 years old and had been found guilty of murder. However, many thought that his trial was a great legal tragedy and it served to help end the use of the death penalty in Britain a few years later. So, why was he hanged? It all began on a Sunday in November 1952 when Bentley attempted to carry out a burglary with his friend Christopher Craig. Whose idea the burglary was isn’t known for sure, although the personalities of the two men do suggest who might have been the leader. The two were on the roof of a building when the police spotted them. Both Bentley and Craig were charged with murder, and both, at their trial, told the court that they were innocent. The trial, and particularly Bentley’s sentence, shocked many people. 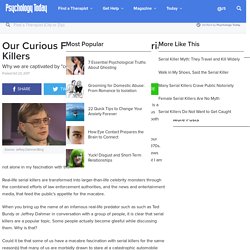 Serial killers have been part of our popular culture since the mid-1970s. Their great prevalence in our news and entertainment indicates that I am not alone in my fascination with them. article continues after advertisement Real-life serial killers are transformed into larger-than-life celebrity monsters through the combined efforts of law enforcement authorities, and the news and entertainment media, that feed the public’s appetite for the macabre. 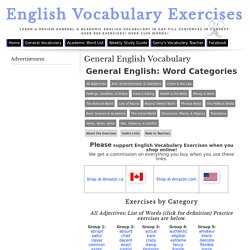 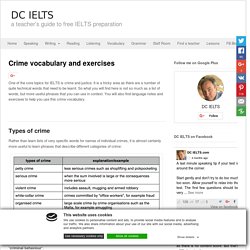 Full IELTS VOCABULARY Topic CRIME and CRIMINALS. MOST EVIL 2X21 SCHEMERS. Cambridge English Advanced (CAE) Reading & Use of English Part 6: free practice test (Cross-text multiple matching) Artice A It has been alleged that the mother charged with attempted murder after dumping her newborn baby into a drain has admitted to abandoning the baby boy. 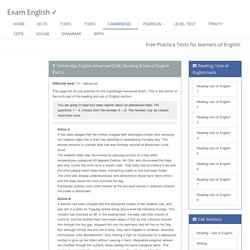 The woman remains in custody after bail was formally refused at Blacktown Local Court . The newborn baby was discovered by passing cyclists on a day when temperatures surpassed 40 degrees Celsius. Mr Otte, who discovered the baby and only cycles the route once a month, said, ‘That baby had no chance if we and the other people hadn't been there. Something made us find that baby today'. The child was already undernourished, and dehydration would have taken effect and the baby would not have survived the day.

Article B A woman has been charged with the attempted murder of her newborn son, who was left in a drain on Tuesday before being discovered the following Sunday. 89 FREE Crime and Punishment Worksheets. Man held in Dublin over ‘chess killing’ CRIMINALS ARE MADE, NOT BORN by Jess W on Prezi. Crime and punishment. Crime. Are murderers born or made? Murders are tragic but rare. 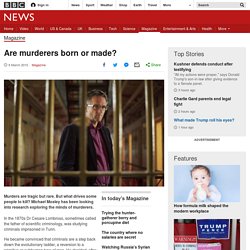 But what drives some people to kill? Michael Mosley has been looking into research exploring the minds of murderers. In the 1870s Dr Cesare Lombroso, sometimes called the father of scientific criminology, was studying criminals imprisoned in Turin. He became convinced that criminals are a step back down the evolutionary ladder, a reversion to a primitive or subhuman type of man. He decided, after years of study, that you could tell a criminal by the shape of their face and the excessive length of their ape-like arms. "A criminal's ears," he wrote, "are often of a large size. Sadly, spotting potential murderers turned out to be nothing like as simple as Dr Lombroso claimed and his "scientific" findings were soon discredited.

The invention of functional brain scanning in the 1980s revolutionised the understanding of what goes on inside our heads. Image copyright ALAMY But why does this happen? Image copyright Science Photo Library Image copyright Other. Criminology assignments: Are criminals born or made? Does an “evil gene” exist, a hereditary disorder that causes crime? 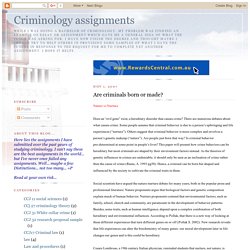 There are numerous debates about what causes crime. FREE Are Criminals made or born? Essay. I think criminals are not born but made because of certain conditions in theier lives. 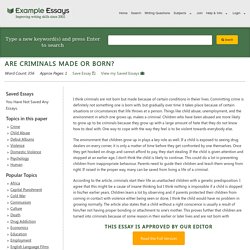 Committing crime is definitely not something one is born with, but gradually over time it takes place because of certain situations or circumstances that life throws at a person. Things like child abuse, unemployment, and the environment in which one grows up, makes a criminal. Children who have been abused are more likely to grow up to be criminals because they grow up with a large amount of hate that they do not know how to deal with. One way to cope with the way they feel is to be violent towards everybody else. The environment that children grow up in plays a key role as well. According to the article, criminals start their life as unattached children with a genetic predisposition.

This Essay is Approved by Our Editor.