For the crime novel "Come with Me" 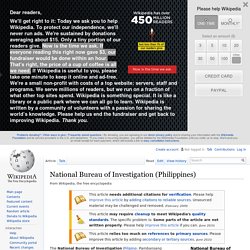 Its history retroacts to 13 November 1936, when a Division of Investigation (DI) under the Department of Justice was created with the enactment of Commonwealth Act No. 181 by the First National Assembly. NBI female agents: Women helping women. Gender has never been an issue, says a female NBI agent. 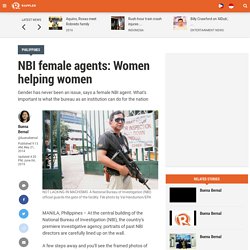 What's important is what the bureau as an institution can do for the nation Buena Bernal Published 9:13 AM, May 21, 2014 Updated 4:20 PM, June 04, 2015. How to write... Crime Fiction. Detective novels and thrillers account for more than 30 per cent of the total books market, which makes crime the nation’s favourite genre, writes Mark Sanderson. 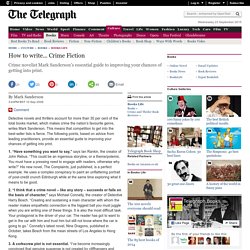 This means that competition to get into the best-seller lists is fierce. The following points, based on advice from leading practitioners, provide an essential guide to improving your chances of getting into print. 10 Tips on How to Write Believable Crime and Murder Scenes. We’re starting a fun series covering a number of weeks featuring guest posts from professionals who work in medical, police investigation, and legal arenas in order to help writers get “real” in their fiction. 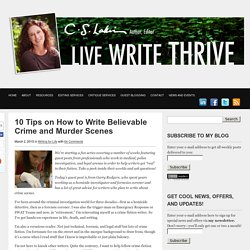 Take a peek inside their worlds and ask questions! Today’s guest post is from Garry Rodgers, who spent years working as a homicide investigator and fornesics coroner and has a lot of great advice for writers who plan to write about crime scenes. How to write the perfect crime story. The crime novel, as a visit to any good bookshop will tell you, is a huge category, and I would never claim to know the definitive method of constructing and writing one; I can only go from my own experience of writing for TV shows like Silent Witness and Wire in the Blood, and the crime novel trilogy that started with Crusher. 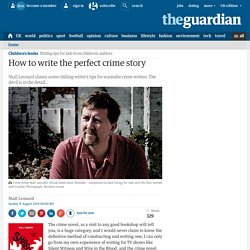 The best place to start is with a story that fascinates you as a writer. If you feel excited writing it there's a far better chance your readers will feel excited too. Real life is always the best source of stories, but never rely on newspapers or TV for the whole truth: journalists often omit inconvenient facts, or simply get stuff wrong, and TV writers constantly cheat and fudge reality to make their story work better, or to fit a timeslot or a budget. Picnic grove. Forests around UP los banos. 7 Common Mistakes Regarding Autopsy Reports. When a breaking news case involves a sudden, unnatural or violent death, journalists will often get a copy of the autopsy report. 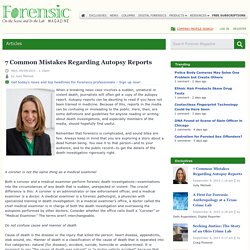 Autopsy reports can be daunting to read if you have not been trained in medicine. Because of this, reports in the media can be confusing or misleading to the public. Here, then, are some definitions and guidelines for anyone reading or writing about death investigations, and especially members of the media, should hopefully find useful. 4 Storytelling Lessons We Can Learn from the Giant Fuckup that was True Detective Season 2. Article_23038_6-myths-about-crime-you-believe-thanks-to-hollywood_p2. Key Facts about the National Center for Missing & Exploited Children. The National Center for Missing & Exploited Children®assists law enforcement, families and the professionals who serve them with cases of missing and exploited children. 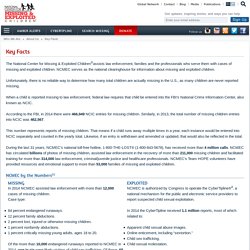 NCMEC serves as the national clearinghouse for information about missing and exploited children. Unfortunately, there is no reliable way to determine how many total children are actually missing in the U.S., as many children are never reported missing. When a child is reported missing to law enforcement, federal law requires that child be entered into the FBI’s National Crime Information Center, also known as NCIC. Support-child abduction - Philippines Missing Persons. The circumstances surrounding child abduction are often quite different from the way they're shown in TV shows and movies. 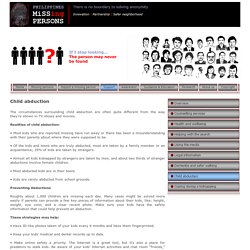 Realities of child abduction: • Most kids who are reported missing have run away or there has been a misunderstanding with their parents about where they were supposed to be. • Of the kids and teens who are truly abducted, most are taken by a family member or an acquaintance; 25% of kids are taken by strangers. PHILIPPINES KIDNAPING SYNDICATES STRIKING AGAIN FOR YOUR ORGANS. After a Child Abduction, 1st Steps Are Crucial. The horrible case of a child abduction in Georgia early this morning reminds us that after a child kidnapping, the first steps you take can be crucial. 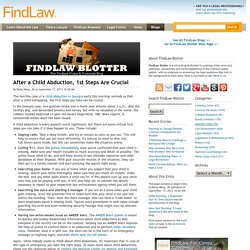 In the Georgia case, two gunmen broke into a home near Atlanta about 2 a.m., shot the family's dog, and demanded jewelry and money. But with no valuables in the home, the robbers instead abducted 14-year-old Ayvani Hope Perez, NBC News reports. No53_27PA_Corpuz.pdf. Crime Library: Kidnappings. When Your Child is Kidnapped. Kidnapped! 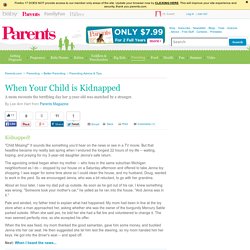 "Child Missing! " It sounds like something you'd hear on the news or see in a TV movie. But that headline became my reality last spring when I endured the longest 22 hours of my life -- waiting, hoping, and praying for my 3-year-old daughter Jenna's safe return. The agonizing ordeal began when my mother -- who lives in the same suburban Michigan neighborhood as I do -- stopped by our house on a Saturday afternoon and offered to take Jenna toy shopping. I was eager for some time alone so I could clean the house, and my husband, Doug, wanted to work in the yard. About an hour later, I saw my dad pull up outside.

Dinky confirms abductions, belies kidnapping for organs. MANILA, Philippines – Kaye heard the voice of her deceased father, urging her to run away from her captors. Gerald, on the other hand, used a bottle to break the window of the van holding him captive. Both were 11 years old. Both were able to escape their abductors. The report on Kaye and Gerald’s abduction was released by ABS-CBN’s Failon Ngayon back in March, igniting rumors involving child abductions in Valenzuela that have spread like wildfire through text messages and e-mails. Rumor has it that an organ trafficking syndicate aboard a white van abducts 6 to 14-year olds and sells their internal organs for medical purposes. The panic that the rumor has caused led Valenzuela Mayor Sherwin Gatchalian to post warnings to individuals who disseminate the misinformation. While there were no official reports that organ trafficking is being practiced in the said cities, cases of abduction have been reported to the police.

Syndicates abducting kids for their internal organs? By: Francis Allan L. Angelo. Calls for missing kids center mount. Latest News Philippines: Calls for missing kids center mount – Journal.com.ph: CALLS are mounting for the creation of a National Center for Missing Children in the wake of growing cases of missing kids in the country. Other countries like the United States have a similar center for missing children, especially created to investigate the disappearance of kids. However, the country is yet to have a similar unit that can work 24/7 to investigate cases of missing kids. At present, the public only rely on the Philippine National Police’s help in finding missing children. PNP chief, Director General Alan LM Purisima has responded to public appeals for help and has ordered his men across the country to respond to cases of missing children immediately after such incidents are reported.

The PNP chief wants an improved response time in investigating these cases saying the police will forego a policy that allows 24-hours to lapse before they launch a search for children reported as missing. Continue… 4-year-old child found dead in Rizal creek buried. A four-year-old child who was found brutalized days after he went missing was laid to rest Saturday, amid cries for justice from his family.

Police: No link between missing children, organ trafficking. (Updated 3:39 p.m.) Philippines. Philippines 2012 Crime and Safety Report. Overall Crime and Safety Situation Travel Warning. The truth is in the numbers — Live in the Philippines. A little more than a week ago, there was a very surprising outcome to several old kidnapping cases in the United States. Parental Kidnapping and Abduction. We Can Help Recover your Child. The Philippines is not a party to the Hague Convention on the Civil Aspects of International Child Abduction Hundreds of American parents face a similar plight, fighting from within the United States to bring home children they say were kidnapped and taken abroad by the other parent.