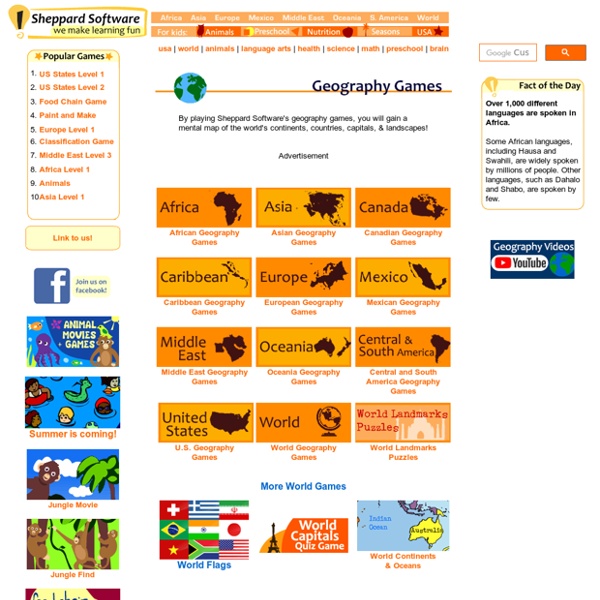 Interactives archive: Disasters Anatomy of KatrinaTrack the hurricane from its birth in the open ocean through its catastrophic encounter with the Gulf Coast. Anatomy of NyiragongoFind out what features make this unquiet volcano tick. Anatomy of a TsunamiFollow the tsunami from its birth at the seafloor to its devastating collision with coasts around the Indian Ocean. Asteroid That Hit L.A., TheA catastrophe calculator lets you try out some "what if" scenarios. Blasts From the PastExplore a clickable map of supereruptions around the world. How New Orleans FloodedExamine a visual chronology of exactly where and how 85 percent of the city wound up underwater.

Fun facts about the seven continents & different cultures around the World. Continents In the last article you learned how to divide the world into hemispheres. You can say in which two hemispheres a place is located. In this article we are going to learn a little about the continents, how many there are and a few interesting facts about each. A continent is one of the seven main land areas on the Earth.

Virtual Fieldtrips The concept of Virtual Field trips has been around for a long time. In the past they have been very structured. Developers and educators have created the websites and content focused on the specific needs of the target audience and subject area. This is a great strength, but it is also a limitation. How To Pack a Carry-On Like a Boss If you thought my Type-A agenda planning was bordering on madness, you may be even more concerned with the way I pack a suitcase. But ohemgee, this kind of thing gets me completely high. On tour, I was the one designated to pack our gear into the trailer.

Interactives archive: Earth Amber Around the WorldFrom the Arctic to the tropics, from Mexico to Myanmar, amber is cosmopolitan, as this clickable map shows. Anatomy of KatrinaTrack the hurricane from its birth in the open ocean through its catastrophic encounter with the Gulf Coast. Anatomy of NyiragongoFind out what features make this unquiet volcano tick. Anatomy of a TsunamiFollow the tsunami from its birth at the seafloor to its devastating collision with coasts around the Indian Ocean. Blasts From the PastExplore a clickable map of supereruptions around the world. Brief History of Life, AExplore the history of life on Earth as we know it today, from the earliest bacteria to the first modern humans.

World Map Match Game - Geography Games For Kids - By KidsGeo.com You will be shown 21 random countries each round of game play. Your job is to place each nation in the correct location, as quickly as you can. Use your mouse to drag each country map to the correct location on the Earth. Ben's Guide: Grades K-2 Our Nation | Our Government | Your Neighborhood | Ben's ABCs | Symbols of U.S. Government Games and Activities | U.S. Government Web Sites for Kid

Chris Backe | Asia Travel Guides, Reviews, Diary, News Sites in the network: Asian Correspondent Tech Wire Asia Places Stay Eat Drink Adventure Interactives archive: Exploration Body BreakdownsClick on different parts of a climber's body to discover what people experience at high altitudes. Climb DenaliExplore the demanding route from base camp to the 20,320-foot summit. Climb EverestFollow the routes up the north and south sides of Mount Everest, through 360° photographic panoramas and animation. Day In the Life, ALearn what it's like to be an astronaut aboard the Mir. Decode Stela 3"Read" Maya hieroglyphs carved on an eighth-century stone monument, and hear them spoken aloud. Desert FindsLocate the "Rub al Khali Desert" and try to figure out the best mechanism to navigate your way out.

Articles of Confederation The Dis-United States Imagine this scenario. The United States never fought the Civil War because it never expanded west, because it never purchased the Louisiana Territory from France. Why? How to Fit Two Weeks Worth of Luggage Under the Airplane Seat in Front of You Generally if you try that, you find that you've turned up at the hotel in part of town without any suitable shops for that sort of thing, the hotel doesn't provide them, and it's pointless getting a taxi anyway because by the time you get there they'll be closed, or they're shut on sunday anyway, or one of a hundred other issues. A little four-ounce bottle of 2-in-1 shampoo and conditioner, and another of cheap generic shower gel, I find, covers a lot of sins, is legal to take in the cabin, and consumes so little space you can carry them in a jeans pocket. There's no need to scrimp on such stuff and find yourself potentially in a bind when it's as easy to just lose that paperback novel, or a single pair of socks, or - shock horror - find somewhere that you can go do a load of laundry after you've arrived and got settled in, which means you can more or less halve your clothing load (except for shoes). Last vacation I took, someone did the latter.